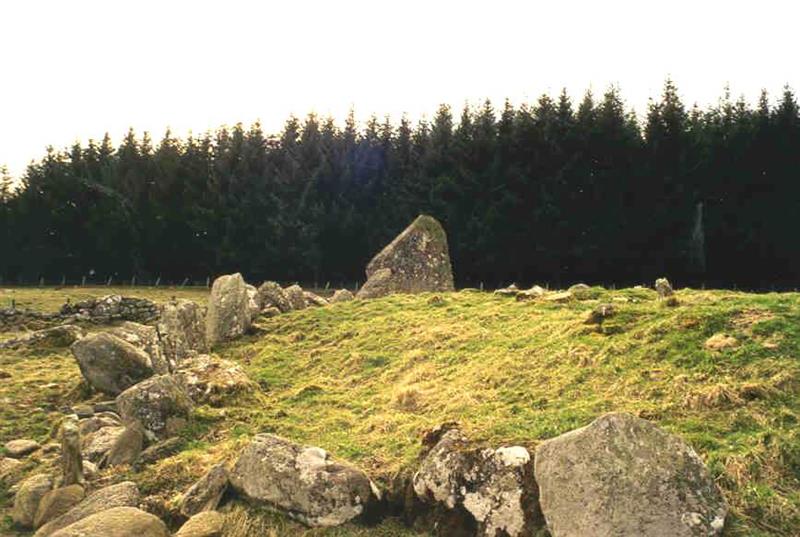 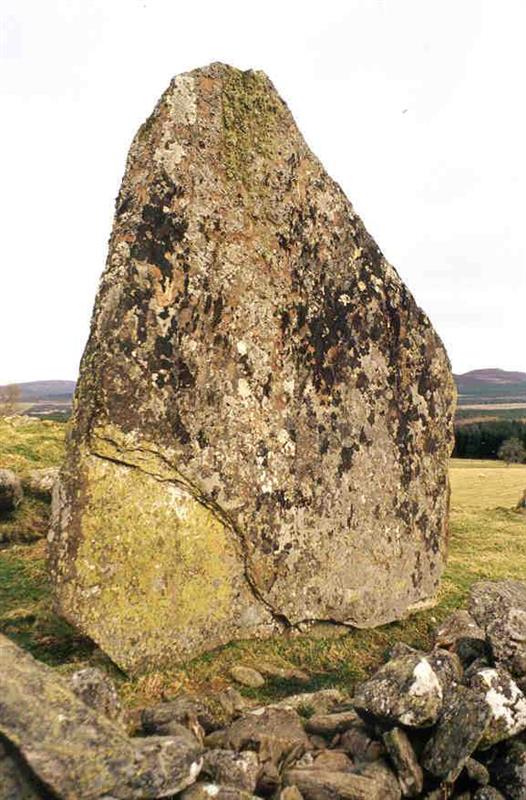 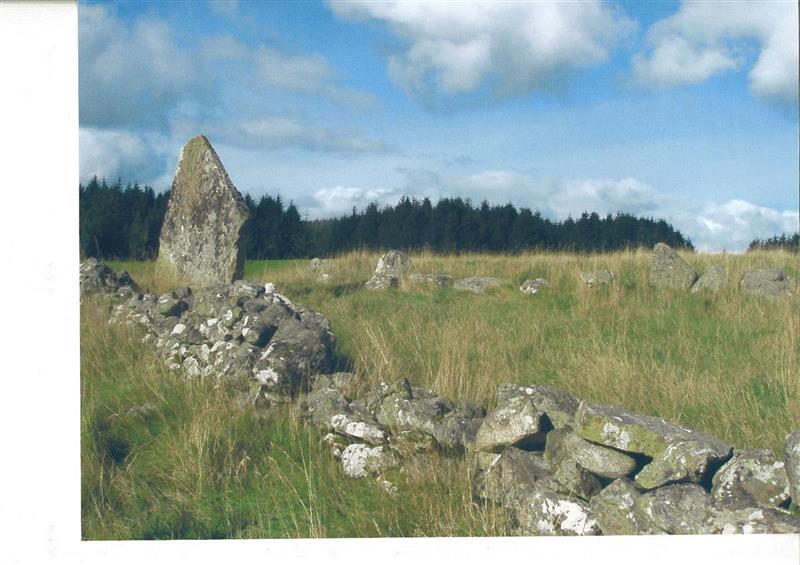 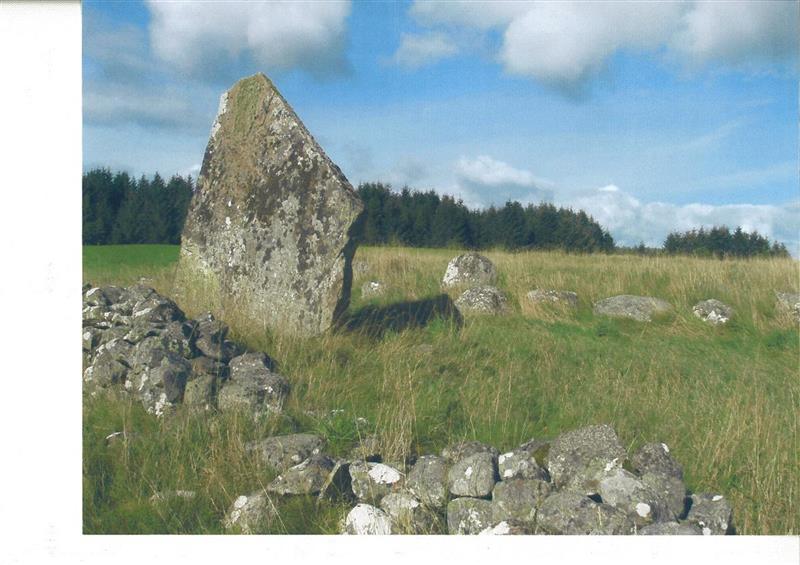 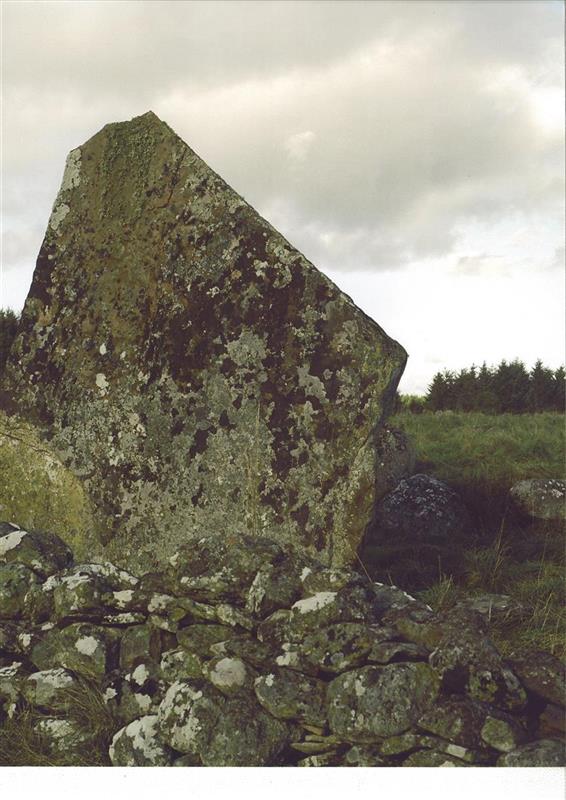 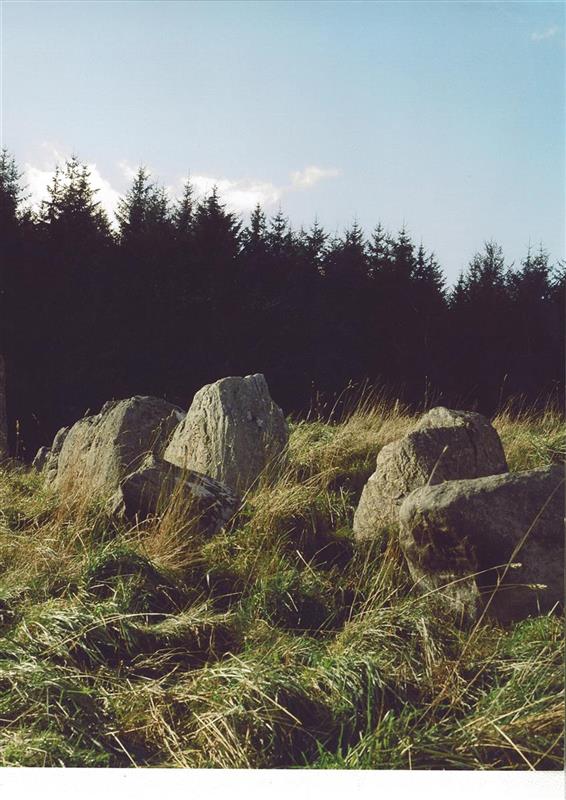 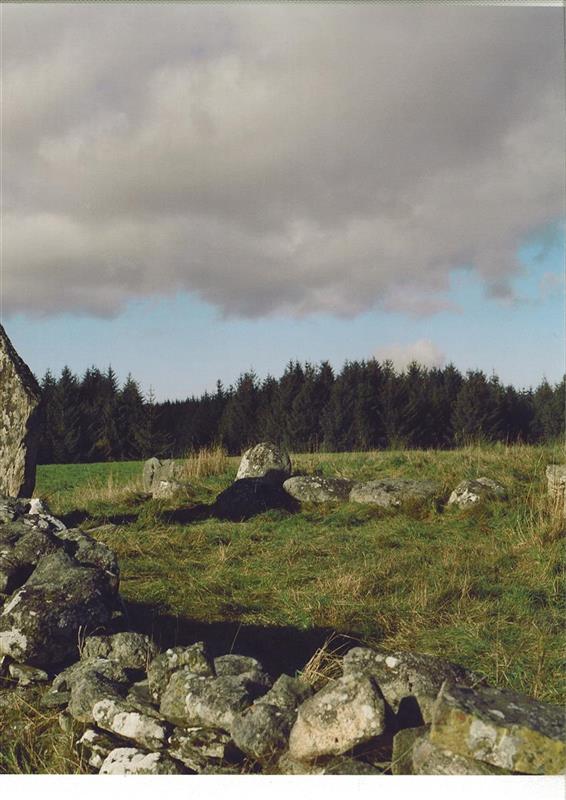 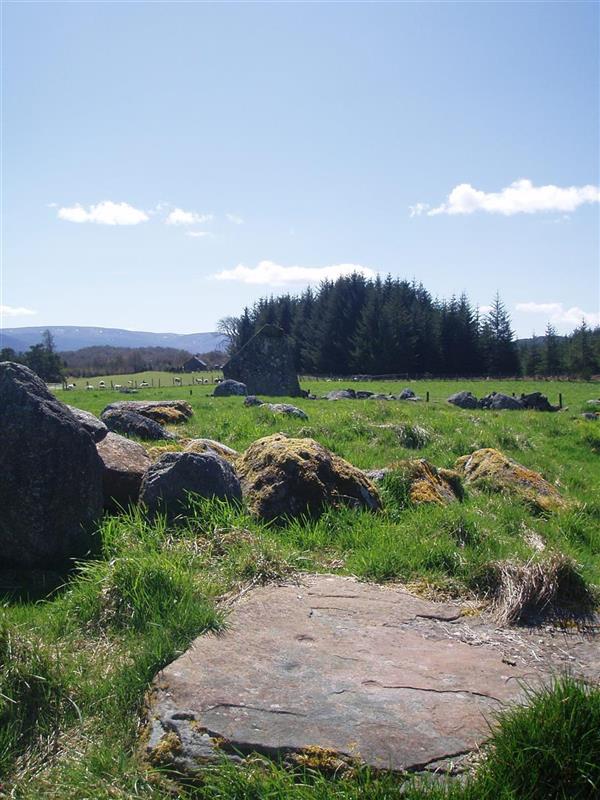 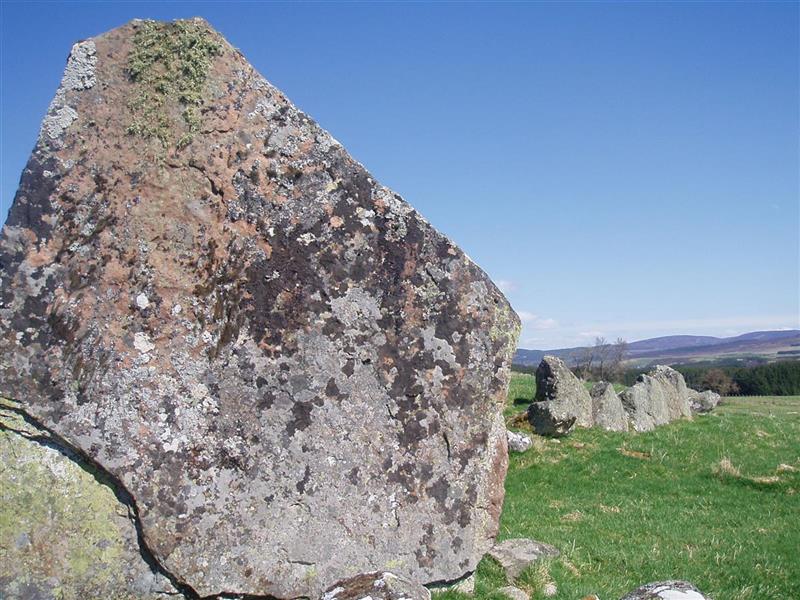 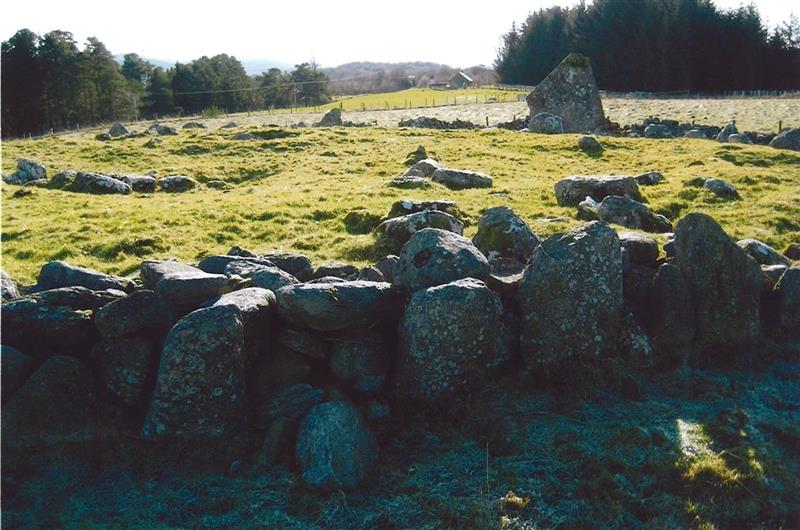 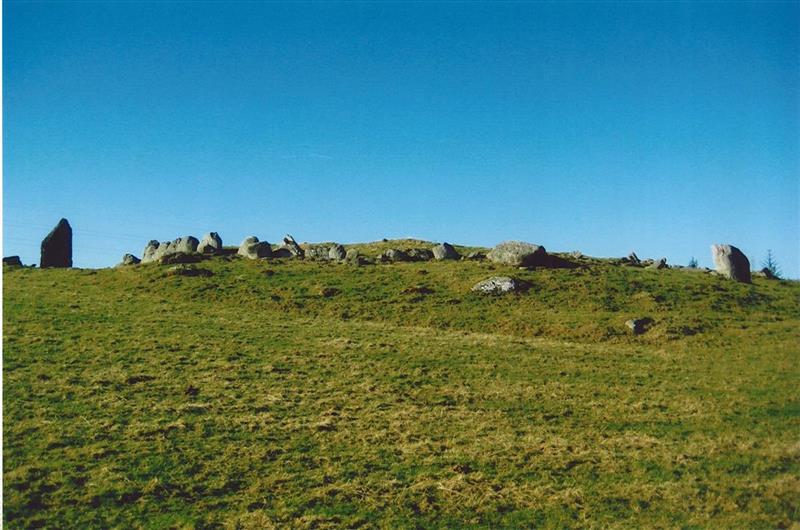 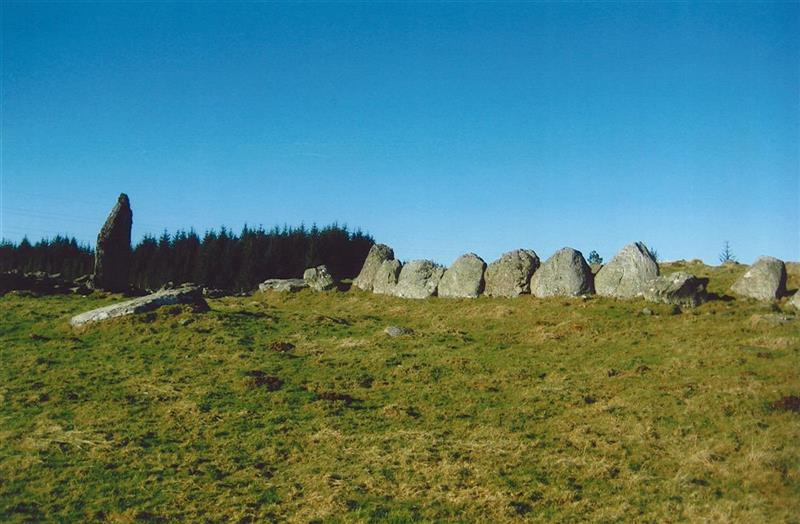 The ring-cairn is situated in undulating agricultural land above the west side of the valley, on a slight rise. The cairn is the largest of the Clava group, having a diameter of 88 feet. The kerb is almost complete though many of the stones have fallen outwards from their original positions. The largest stones are set on the south-west arc, varying between 4 feet 6 inches and 2 feet 9 inches high. Some of these have fallen but there is still an impressive length of kerbing of massive and closely set boulders towards the south side. The stones decrease in size towards the north-east and many of them only just project through the turf. Inside the kerb there remains 2 or 3 feet of cairn material mixed with earth, much disturbed and turf-covered. Through this there project two contiguous flat slabs which appear to be part of the east side of the inner circular setting. They are 27 feet from the outside of the kerb, so if the central area was concentric its diameter would be about 34 feet. Another stone which appears to be earthfast can be seen on the south but only 20 feet inside the kerb. Three upright stones belonging to a circle of monoliths survive. The dominating feature of the site is a thin flat slab standing on the west-south-west 17 feet from the kerb and opposite the largest stones. It is 11 feet in height, 9 feet 9 inches in width and only 9 inches thick. Unlike this stone the other two monoliths on the east side are irregular boulders set on end, 3 feet and 5 feet high, and set 11 feet and 13 feet from the line of the kerb. On the south east side three fallen slabs, the longest 7 feet 6 inches, are spaced evenly between the upright stones and apparently lie where they have fallen, as also a slab on the north-west side. Part of an eighth monolith lies on the north-east and another large stone 6 feet long bearing three cupmarks
(W Jolly 1882) lies against the kerb on the north-north-east. It appears to be part of a ninth monolith.
A S Henshall, visited 8 April 1957; W Jolly 1882.

There are at least three cupped stones in the Gask concentric stone circles.
(1) A large slab of red sandstone 10 1/2 feet high by 10 ft. wide and 7 to 12 ins. thick stands erect in the S.W. quadrant. It bears eleven cups between 3 1/2 and 1 1/2 in dia., and 1/4" and 5/8" deep.
(2) In the middle circle, on the S.W. side stands a block of grey granite 3 1/2 feet high by 3 feet wide. It bears sixteen cups on the front face and a single cup on the left side 6 inches from the ground. (3) A flat recumbent slab of red sandstone in the outer circle a little west of the abode, and 9 yards west of a line drawn from the centre of the circle to the middle of the large slab of red sandstone bears three cup marks. The stone is about 4 feet long and the same broad.
W Jolly 1882.

"The tallest stone at the south side of this circle of Gask, mentioned by Mr. Jolly (W Jolly 1882) as bearing cup marks seems to me to be simply a shaly sandstone flag of rough ripple-marked stratification, in some places roughly imitating cup markings."
J Fraser 1884.

A small clearance cairn has recently been carefully deposited on the boundary of the scheduled area, to the NW of the cairn. The cairn has a diameter of about 1m and seems to have been constructed to reflect the kerb-cairn tradition - with larger stones placed in a ring containing a more rubble-filled core. It is not known who built the cairn, but the cleared stones are presumed to have come from around the stone dyke rather than the main cairn itself.
(KC 11/12/03)