Excavation at the site of Kinloch in which a large body of Mesolithic material was discovered. Radiocarbon dates taken at the time provided the earliest evidence so far for human settlement in Scotland. 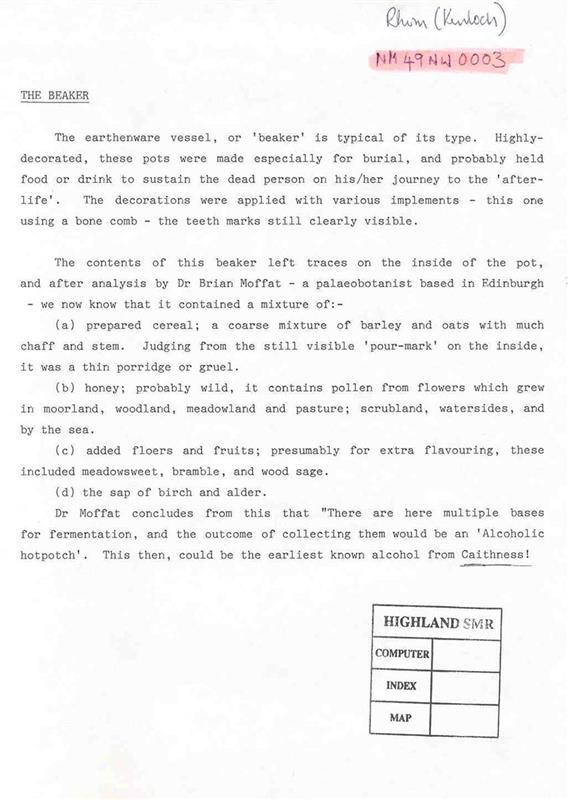 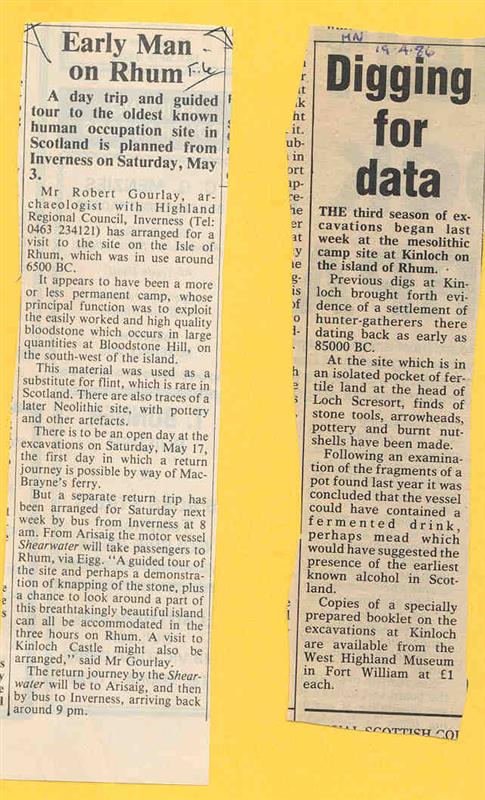 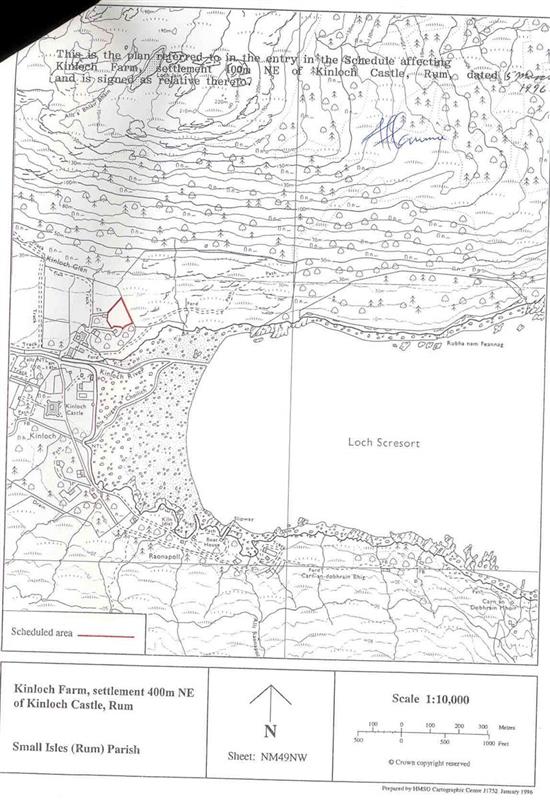 A considerable quantity of flaked bloodstone (including a barbed-and- tanged arrowhead) and a small quantity of flintwork, which was found in a ploughed field 350m NE of Kinloch Castle, probably indicates the site of a knapping-floor.
Visited by RCAHMS June 1983.

In the spring of 1984, excavations were carried out to investigate the nature and extent of a rich lithic scatter uncovered during ploughing by the Nature Conservancy Council the previous year. Using a stratified random sample, the ploughsoil across the field was sampled and five areas were examined in greater detail. This revealed a dense spread of lithic material across the SE corner of the field. Very few finds were made in the rest of the field. As the scatter continues otside the field boundary no exact size for the site can be given but a minimum area of 4,500 sq m would be appropriate. The density of lithic debris is as high as 1,800 pieces per square metre towards the centre of the concentration and it tails off very abruptly at the edges.
The majority of the assemblage is made of Rum bloodstone, available from the west coast of the island. Platform and scalar cores, regular flakes and blades are present. Some scrapers and edge retouched pieces were recovered although the majority of the retouched assemblage comprises microliths, minly backed blades and crescents. One complete and six fragmentary leaf shaped points, several coarse stone tools, manly with bashed or bevelled ends, and two pieces of worked pumice were found. Although no organic remains were preserved, quantities of carbonised hazelnut shell were found.
Because ploughing of the field has, until now, been very shallow, evidence of several features has survived. The most interesting of those examined proved to be a complex of intercutting pits and hollows with a rich fill, including many artefacts set into loamy soil. Isolated stake holes were also uncovered.
The site lies between 10m to 15m OD, within a small hollow opening to the sea at the SE. Recent research has shown the postglacial shore line for Rum to be about 8m OD. Other bloodstone scatters have been recorded on the island.
C R Wickham-Jones, N Sharples, A Clarke, 1984
Sponsor : SDD (AM)

The second season of excavations concentrated upon the area of prehistoric activity identified in 1984. A number of pits and some stake holes were excavated. All were truncated by agriculture but a rich lithic assemblage was recovered, together with some carbonised material.
To the eastern edge of the site an old stream bed had been infilled at a later date. The fill included pottery and flaked lithics, together with a variety of boulders and cobbles. It is presumed to date from early land clearance during the neolithic. To the uphill side of the site, areas of slopewash were identified. In some places these sealed archaeological deposits, and they may be associated with localised environmental disturbance related to the introduction of farming.
C14 dates of 8590+/-95 (GU-1873) and 8515 +/-190 (GU-1874) were obtained from the 1984 excavations. These provide the earliest evidence so far for human settlement in Scotland. Activity on the site has therefore taken place over an extended period of time. Extensive environmental evidence associated with the site and its locality was recovered during the 1985 season. This will hopefully cover the period during which the site was in use.
C R Wickham-Jones, D Pollock, 1985b
Sponsor: HB & M

The third season of excavation opened a trench of approximately 350 metres square around an area of better preservation identified in 1985. A complex series of pits, together with post holes and at least one bedding trench for upright timbers, were uncovered. To the N the area of mesolithic activity is bounded by a wet flush, now infilled with peat, originally a running burn. Along its S banks the dumping of both gravel and larger stones took place in early prehistory and a deposit of birch may also be artificial.
Samples submitted for radiocarcbon dating from both this dumping and a selection of others on the site. Five C14 determinations were obtained from the 1985 excavations; these provide added evidence for mesolithic activity in the mid sixth millennium BC and suggest that it continued, sporadically at least, into the third millennium BC.
C R Wickham-Jones, D Pollock 1986b
Sponsors : SDD-HBM, NCC, Robert Kiln Charitable Trust, Soc Ant Scot, George Morton Ltd, Savacentre (Edinburgh)

20 Radiocarbon dates were obtained from the site. See chapter 10 of 1990 published report for these dates. <1>