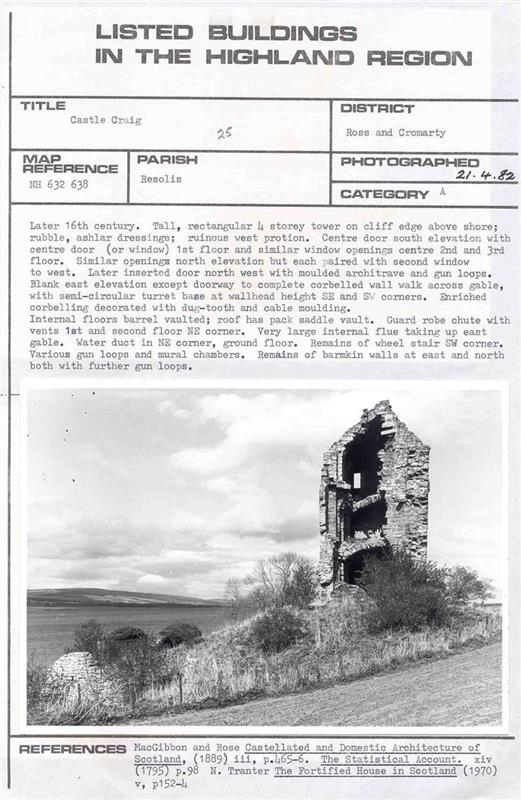 Castle Craig is a simple tower of the early 17th cent. It is said to have been erected by the Urquharts on the site of a residence of the Bishops of Ross. <1>

The structure has extended further south than it does now, but that end is now completely ruined. The top of the cliff on which the castle stands has been fortified by a crenellated wall with round towers.

Castle Craig is as described above. The tower stands four storeys high, each with barrel vaults. The SW end is in ruins, and is marked by a large grass-covered stony mound, which extends from the extant SW face of the tower to the edge of the barmkin wall. The foundations of two walls were discovered at the SW end of the roofed portion revealing the existence of another range.

The remains of Craig Castle, a late 16th-century tower, comprise roofed NE wing, which has vaulted floors and a corbelled parapet; a wing which probably extended to NW, and a stairway in the re-entrant angle, have fallen to ruin. There is an enclosure to N and what may be an oven to E. Parts of the enclosure may be of earlier date, but the traditional association with the bishops of Ross may well relate to the use of the site as an occasional episcopal residence in the post- Reformation period.
Orig Paroch Scot 1855; D MacGibbon and T Ross 1887-92; RCAHMS 1979; G Stell 1986.

The castle was listed at category A in 1971.

Severely eroded with coastal undercutting at HWM. There is a curtain wall 20 metres north of the tower house - ie to seaward - that sits on a near vertical crag of sandstone. The base of the crag is being undercut at the HWM. The curtain wall is heavily covered in ivy. The tower-house is relatively intact on 3 sides but has lost its west wall and is open on that side.
Visited by Scotland's Coastal Heritage at Risk (SCHARP) 2013

The building was reviewed by Historic Scotland in 2014 as part of the Dual Designation Project. The site was not visited and it was recommended that the building be de-listed but remain a scheduled monument. <2>