A man-made mound within the policies of Foulis Castle, possibly a motte or an artificial mound constructed as part of the landscaping. 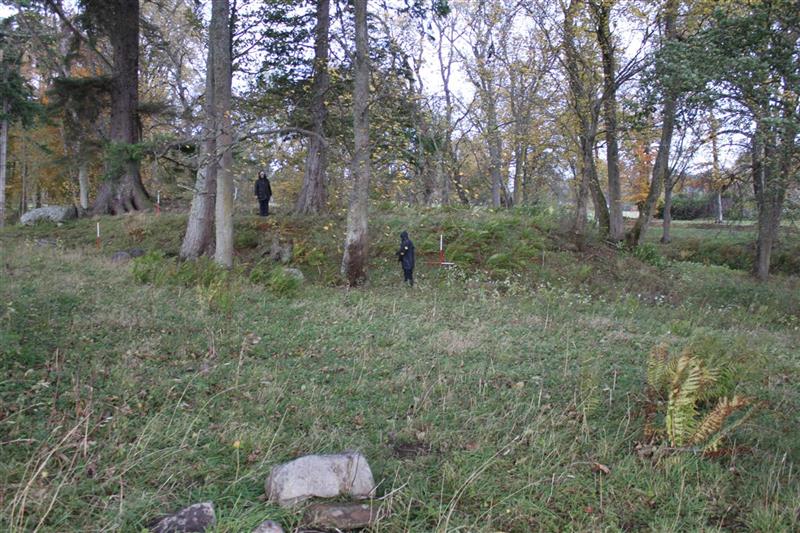 Situated in ornamental grounds of Foulis Castle is a regular, flat-topped mound, in which there are numerous stones protruding through grass, but no definite evidence of a building can be traced. The mound is approached by a ruinous bridge over stream at NH 5886 6396. It is not known whether this mound represents the site of an earlier castle (see NH 56 SE 2).
Visited by OS 15 July 1965 and 29 November 1976.

This small mound is unlikely to be the remains of a motte.
G Stell 1986.

The site was visited and recorded by NOSAS in January 2006. Recent removal of rhododendrons made the true shape of the mound much clearer. It appears to be very much a man-made feature and most likely a motte. The earthwork was observed to be a roughly circular, flat topped mound measuring c.32m at its base and c.19m diameter at the top. It is slightly raised to the west where there are some large trees growing. The vesitges of a possible earth bank are just visible in the NW segment of the summit area, roughly 10m in length and 0.8m in width and running NW-SE. The sides of the mound are very uniform. There is little evidence of a ditch to the south-west although the field wall is on a slightly raised bank. No other features such as banks, ramps or entrances were noted. Further notes and a schematic plan may be seen in the site report. <2>

The mound was investigated as part of the ARCH 'Pathways into the Path' project as a community excavation programme in 2011. In 2011 a topographic survey and a metal detecting survey were carried out. Trench 1 was opened at the base of the mound to explore the possibility of a ditch or other defensive structure in order to test the hypothesis that this site was a possible motte. A spread of small rounded and angular stones were uncovered beneath the turf which ran around part of the mound. Surface deposits contained modern material, suggesting the site was used as a modern dump. At the time of this excavation it was unclear if there was a ditch that had been filled. The feature was left for further examination in 2012. Trench 2 was opened in the field to the east of the mound to explore the existence of the old field boundary that was thought to preserve the route of an old road that ran through the area. Here, investigations revealed a possible compacted surface. Finds from the mound included a worked chert fragment - possibly a gunflint, a small tap slag fragment, a George III 'bullhead' coin from 1876, three musket balls, a metal button, a shoe buckle and a possible lead stylus. <3>

In season (2012), a geophysical survey was carried out on the mound which highlighted an area with a large positive anomaly, unlikely to represent a motte that warranted further investigation. A second season of excavation was undertaken afterwards, and Trench 3, measuring c. 8m N-S by 2m E-W was opened over this area. Excavation revealed a series of deposits, including a possible midden containing charcoal-rich material and animal bone. Samples taken from this layer provided a tight cluster of radiocarbon dates between AD 15-147. The nature of this Iron Age activity is unknown and would benefit from further investigation, but it predated the landscaping of the mound. The purpose of this later mound still remained unclear, but there was no evidence of a motte within trench 3. <4> <5>

A publication of the excavations at Foulis Castle in 2011 and 2012 was later produced by ARCH. <6>