An early medieval cross slab, possibly dating from the 9th century, which was reused as a grave marker during the 18th century and was finally built into the wall of a mausoleum. 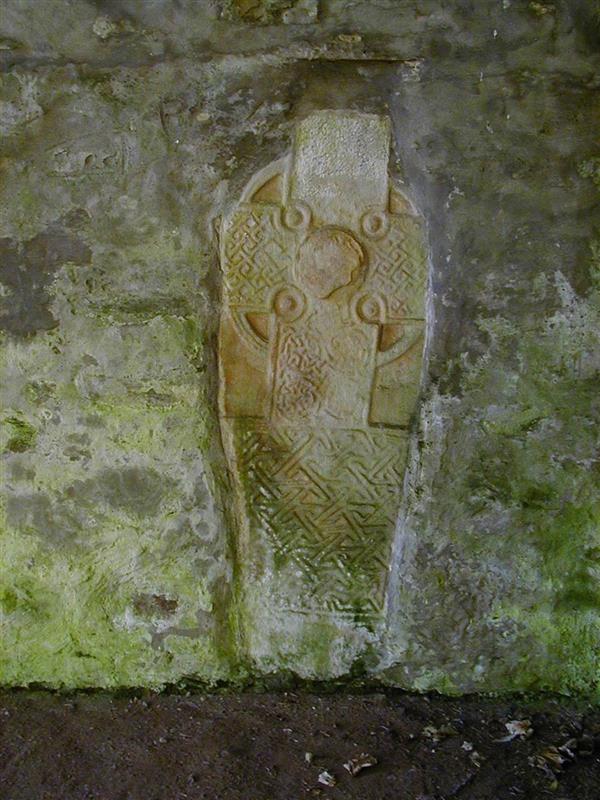 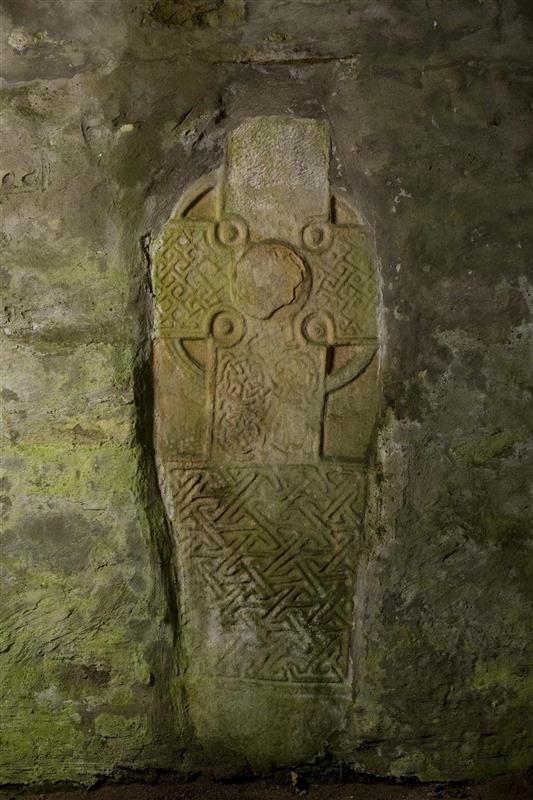 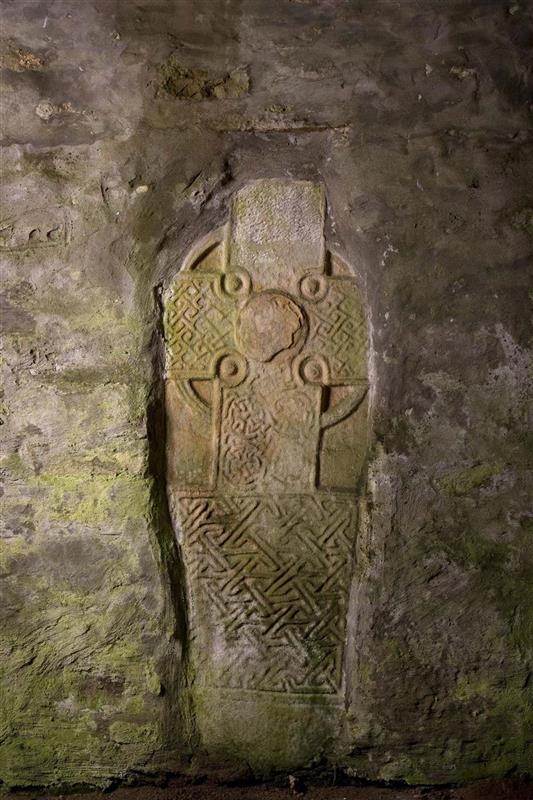 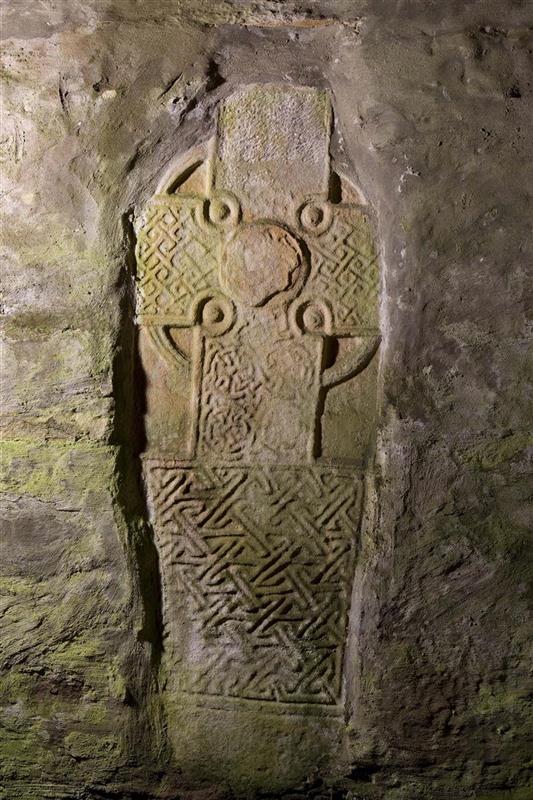 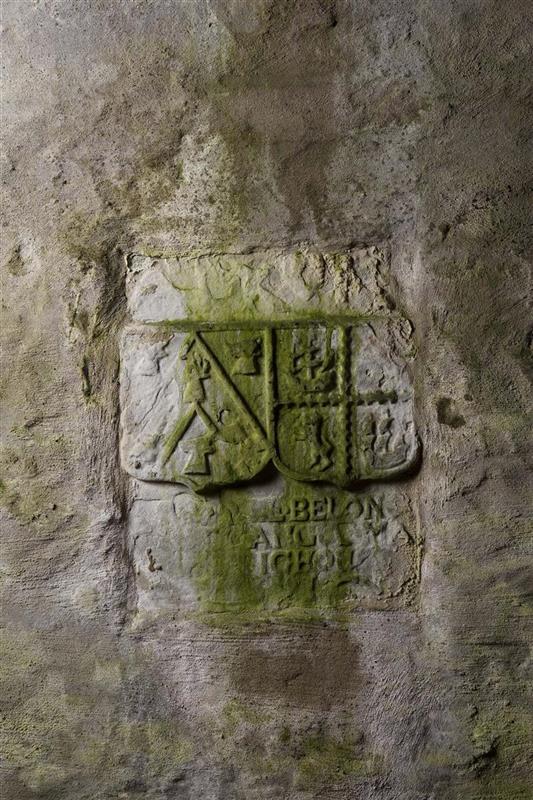 Set into the W wall of the old church is a sculptured rectangular sandstone cross-slab, 6ft 4ins long, 1ft 11ins to 2ft 3.5ins wide and 3 .5ins thick. The upper arm of the cross is defaced by an 18th century inscription.
J R Allen and J Anderson 1903 <1>

The burial ground, mausoleum and cross slab were scheduled in 1925.

Visited 21/11/00 by DML at request of Miss P Richards.
Graveyard in a generally fair condition, although many of the grave slabs are covered in moss. This however would probably need specialist removal to avoid damaging the stones, many of which are laminating. The burial vault/chapel remains are also in a fair condition. Problems of damp within the building appear to have decreased, judging by the growth of algae on the cross slab which appears to be in much better condition than is evidenced in the thumbnail photograph. Miss Richards was concerned about the level of damp entering the building through its walls, and also about the cement type mix which was used on the interior of the chapel some years ago. She wondered if guttering could be added to the building to take rain water away, and if the cement type mix could be removed. As the building is Listed, I am passing these requests to John Duncan for attention. As I was unable to actually enter the burial vault the photograph (hyperlinked) is of poor quality, but does demonstrate that the cross slab appears dryer. <3>

The cross slab was reused as a recumbent 18th-century memorial over a grave within the burial ground. It seems to have been moved around 1915 to be built into the west wall of the refurbished mausoleum. The slab is carved in relief on one face only with a cross and base, decorated with key patterns and circular knotwork. The cross is set in the centre of the slab and the arms are squared off with hollows at the internal angles. A ring links the arms and shaft together. The reported 18th-century inscription, which read "Robert McKay 17" has been crudely chiselled away, presumably when the stone was removed from the burial ground. The slab is currently recessed into the wall with a cement render extending over the edges of the carved face. <4>

An architect's report has been prepared by Historic Scotland for the mausoleum together with a separate condition report for the cross slab itself. These reports contain recommendations for repairs to the building which would improve the conditions for the stone, such as replacing the cement render with lime mortar. It is noted that the best long-term solution would be to isolate the stone from the building, and the condition report makes a series of recommendations to achieve this. <4> <5>

Reay 1 St Colman), Caithness, cross-slab
Measurements: H 1.93m, W 0.70m, D 0.09m
Stone type: grey sandstone
Place of discovery: NC 9691 6483
Present location: set into the W wall of the old parish church at Reay.
Evidence for discovery: found in the adjacent burial ground, re-used for an 18th century grave. Sometime before 1910 it was moved into its present position, and at some date in the late 20th century the inscription was inexpertly obliterated.
Present condition: very worn and damaged.
Description:
The slab was shaped to form a rounded top and was apparently carved on one side only. The cross, carved in relief, fills the available space within a narrow roll moulding, which does not continue above the top edge of the horizontal arms. The cross-head has a triple ring and the small, almost closed, armpits contain single pellets. The horizontal arms are shorter than the upper arm and are filled with key pattern. The decoration in the upper arm is largely removed, except for traces above the central roundel which suggest that it was filled with interlace pattern. The roundel is badly damaged but within a roll moulding are traces of a quadruple spiral. The short shaft is filled with a single-strand interlace pattern and the base with a key pattern.
Date: ninth or tenth century.
Early Medieval Carved Stones Project, A Ritchie 2016