Inverailort House, built in the 18th century, remodelled in the 19th century, was recquisitioned in 1940 as a Special Operations Executive training base. 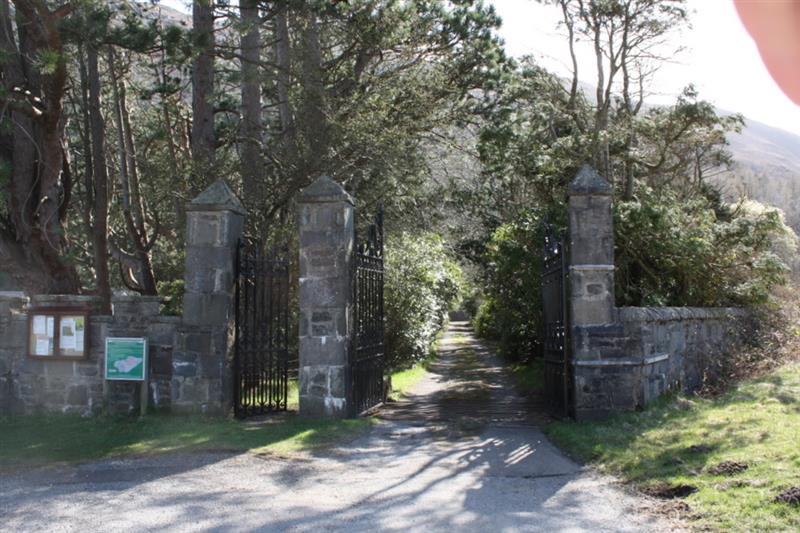 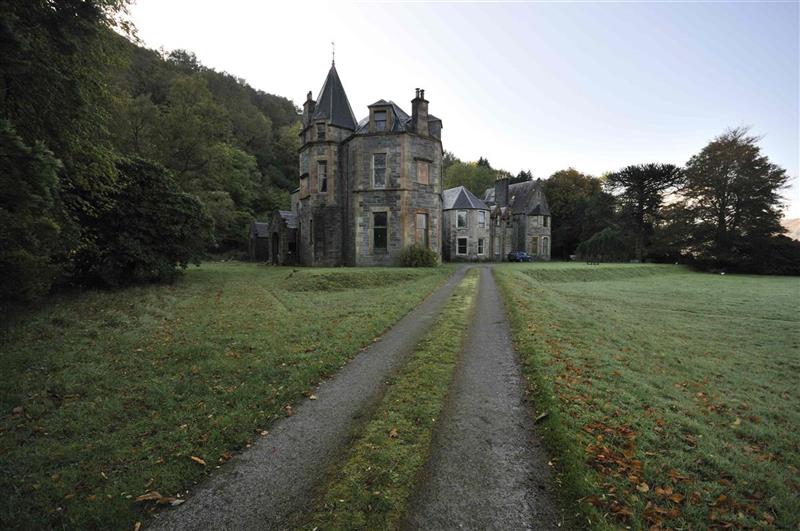 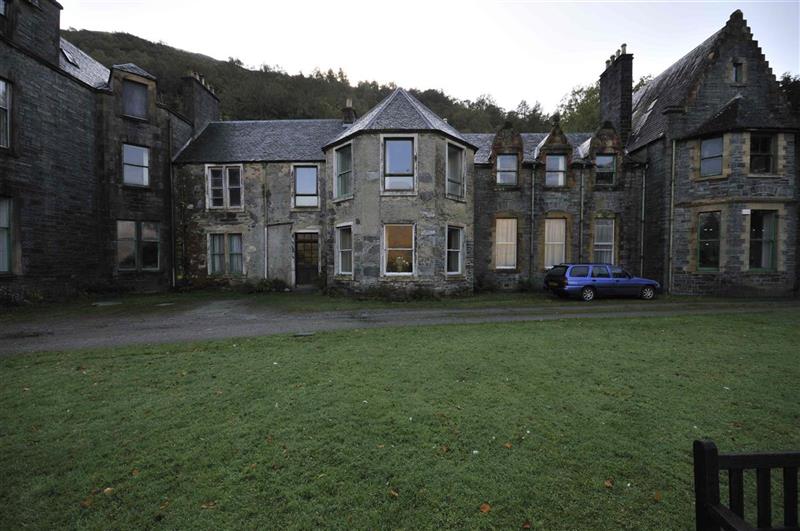 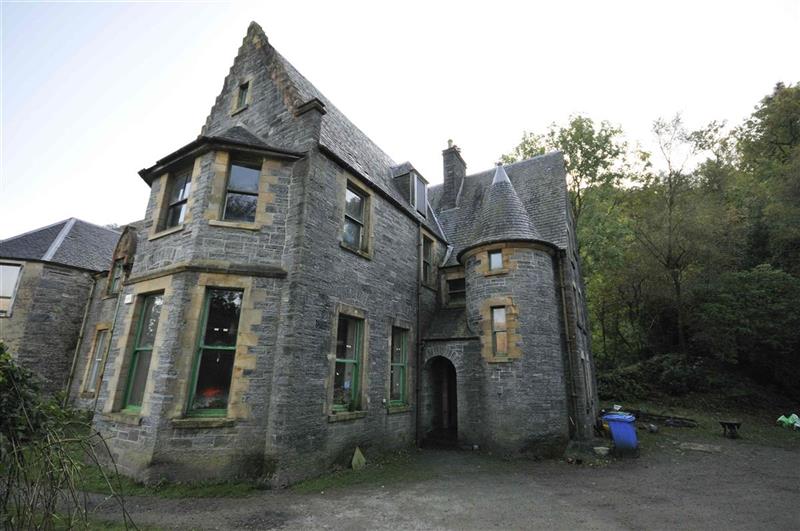 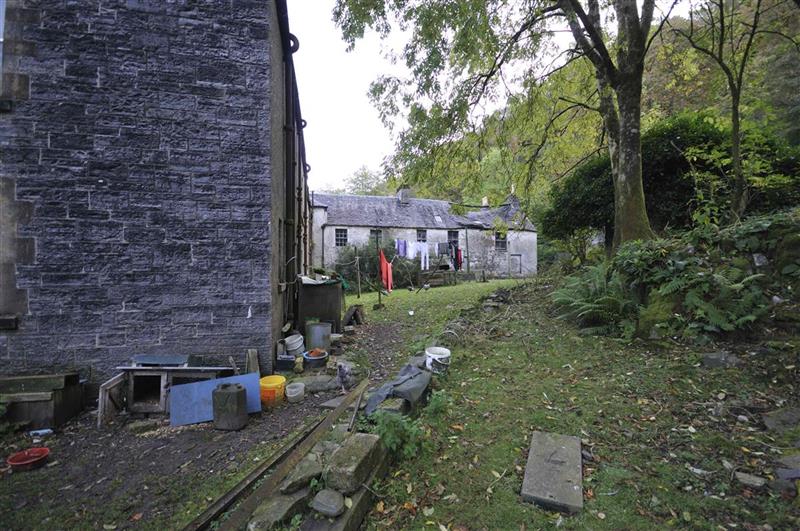 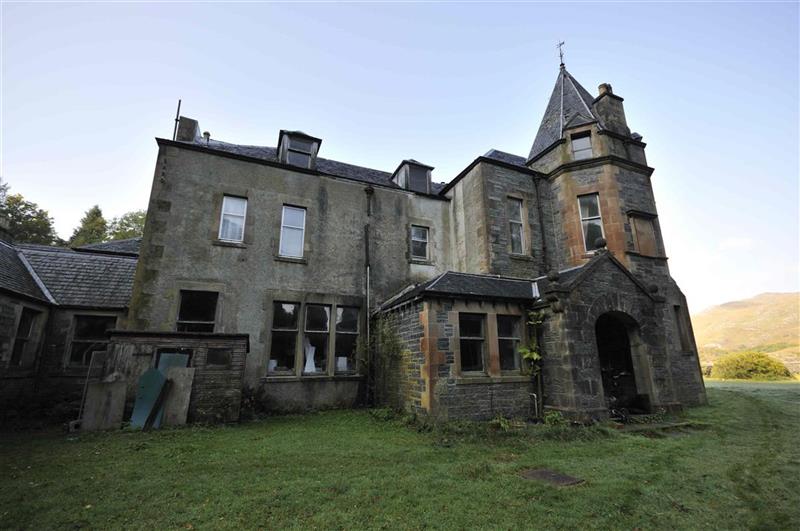 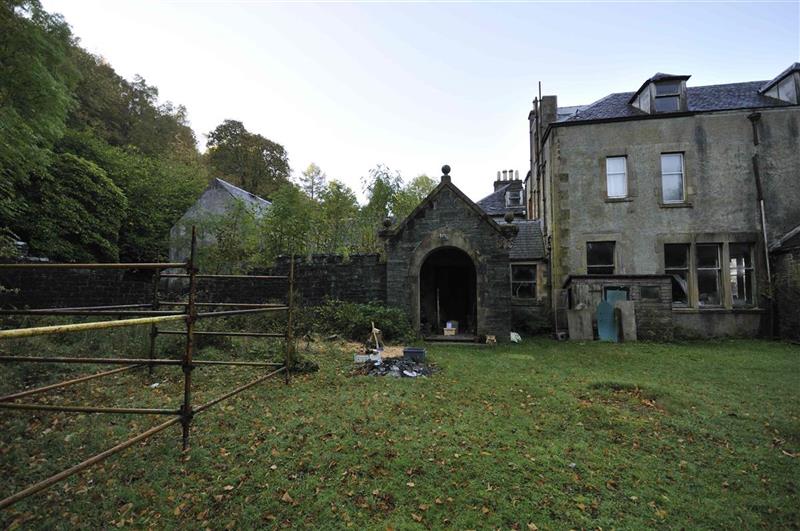 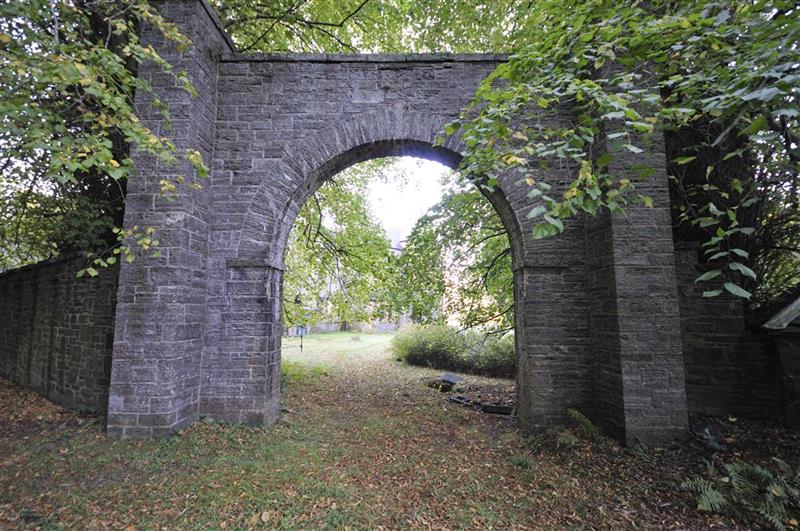 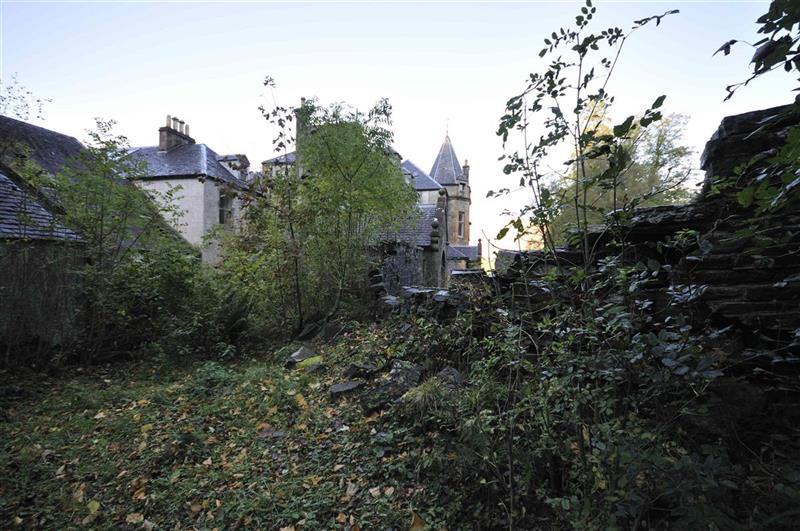 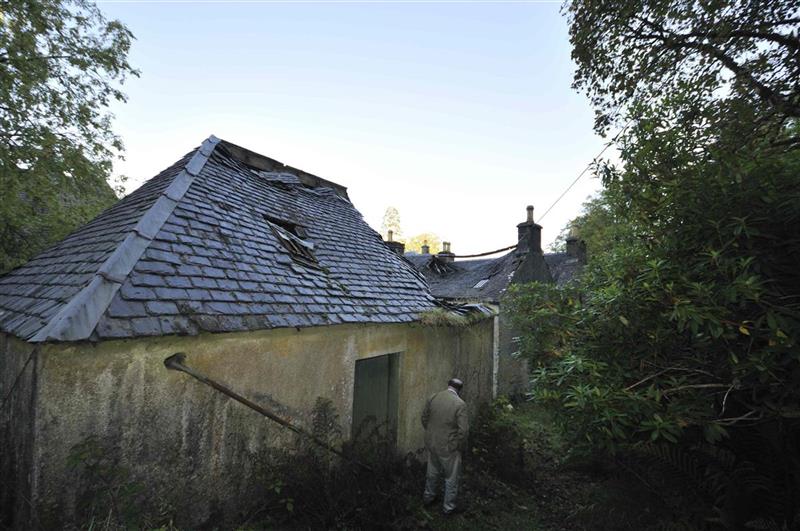 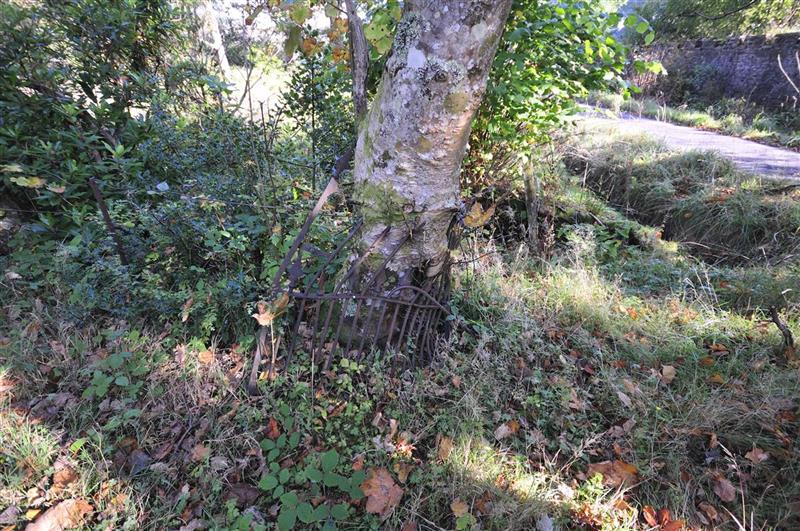 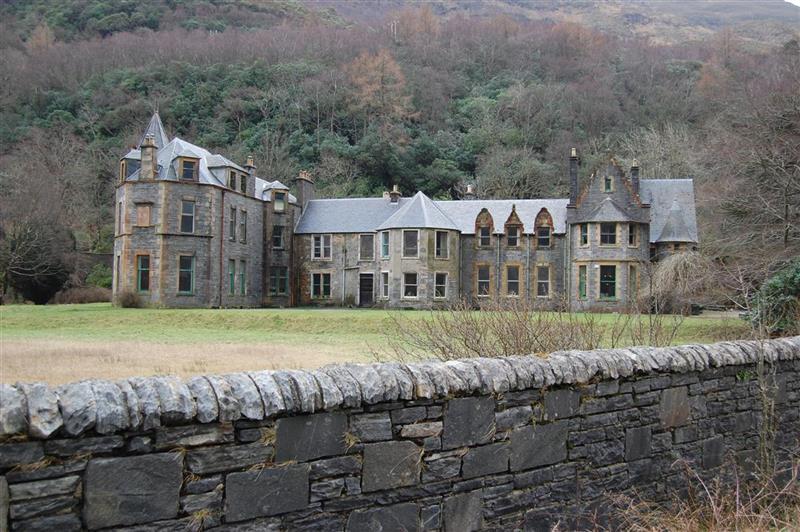 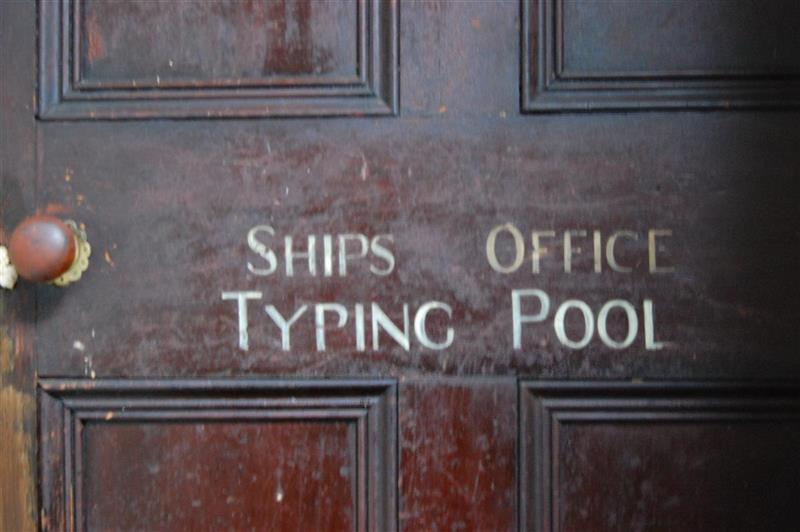 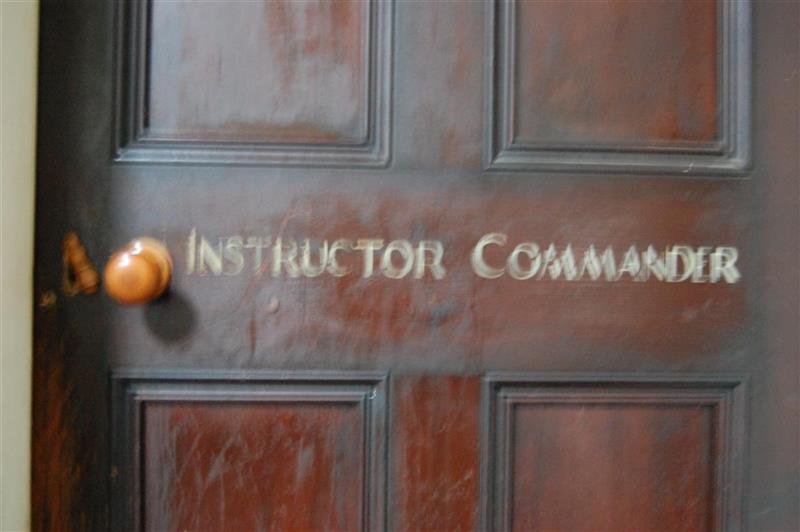 Inverailort Castle, from 18th century. A sunless apparition at the head of Loch Ailort, Inverailort has at its core a Georgian box (leadwork dated 1756), with intact interiors looking earlier than its c.1850 remodelling; further alterations 1867 and 1875, by Alexander Ross. Earlier looking range to rear -the original dwelling? (Ceann a' Chreagain). The house's present appearance is the culmination of a century's unsatiated demand for expansion by descendants of Maj. Gen. Sir Alexander Cameron, who bought Inverailort from Clanranald in 1828. More digestible than J. Pond Macdonald's somewhat nightmarish baronial addition of c.1891, is Reginald Fairlie's 1912 extension to the right in an Old Scots style. One curiosity of the interior is the untouched official signage confirming Inverailort's significance as the Special Training Centre established here in 1940, whose operations subsequently combined with other units to form the Commandos, and later as the Royal Marines Commando base. <1>

The Special Training Centre ( Inverailort House ) was set up in early 1940. Info from Peter Robins via email.

One of bases used for training Special Operations Executive Commando Units for 2nd World War. For some details, see Hyperlink to Internet page. <2>

Inverailort House is situated on the east shore of Lochailort to the south of the River Ailort on the southern edge of its fertile flood plain, sheltered beneath Seann Chruach. The oldest part of the existing house is the south wing which is shown on the First Edition Ordnance Survey map of 1872. This now appears as a relatively substantial late eighteenth or early nineteenth century house. The twin gabled or double pile form suggests that it incorporates an earlier core possibly dating back to the 17th century, and invasive building archaeology would be the only way to verify this. The house was orientated north-south, and the main front appears to have been west facing. Borrodale House, near Arisaig, is a building of a similar form and age in the vicinity.

Relatively soon after the First Edition was surveyed, c.1880, a large new L plan wing was added to the north gables of the existing house. This wide three bay two storey block contained a suite of formal reception rooms and principal bedrooms, the two storey canted bay affording excellent views of the area. This block faces north with an entrance to the east, sheltered by an elaborate cast iron veranda. The architectural style is typical of a smart villa, which would not be out of place in the suburbs of any Scottish town. Much of the interior of this block survives including a number of fireplaces and a fine sideboard recess in the original dining room.

In 1891 the architect J Pond MacDonald added a substantial baronial wing to the east, creating a large new drawing room - later called the ball room - facing north, a new entrance facing east, and further accommodation to the south. The wing is embellished with a large octagonal turret the base of which forms the ‘inglenook’ fireplace. This work is of a completely different scale to the earlier house and perhaps suggests that it was to be the first phase of a much grander scheme that was not realised. The interior of this wing is extremely elaborate with a gilded heraldic panel over the drawing room fireplace; heavy plasterwork and extensive panelling survives throughout.

During the nineteenth century the family created a Roman Catholic chapel on the first floor of the back or east portion of the original house. This evocative timber-lined chapel may well be in the earliest part of the building. Its hidden location uncelebrated externally is perhaps a memory of historic persecution.

The family’s Catholicism probably lead to the appointment of the architect Reginald Fairlie in 1912. He too was Catholic and designed a number of churches including examples in Mallaig and Fort William. At Inverailort Fairlie designed a large new wing to the west of the c.1880s block. This work attempted to balance the façade providing a large new dining room and a morning room which has since been used as the local post office. The first floor provided further bedroom accommodation. Fairlie opted for a Baronial style, but of a gentler seventeenth century inspired form, with its crow-stepped gable and elaborate dormer heads. The interior of this wing also survives largely intact.

Inverailort is a fascinating house because the different builders have made no attempt to blend their work in with the existing building. It is quite a rare example of a building where the most recent four phases of development are clearly identifiable. It is unusual that the house was enlarged three times in less than forty years. The Post Office directories show that in 1872 Inverailort was owned by Duncan Cameron of Inverailort, in 1875 by Mrs Cameron of Inverailort, but by 1894 James Head had acquired the estate, and in 1912 Mr Cameron Head employed Reginald Fairlie. Additional work on the family and ownership history is required for a fuller understanding of the building.
Information from RCAHMS (STG), 2007

House was requisitioned in 1940 during World War II for training use by Special Services Units. The estate and grounds intensively utilised for training of Special and Commando units. The house was returned to the Cameron-Head family in May 1945.
Used by the army at first it was transferred to the Royal Navy for Commando training in August 1942 after which it was called HMS Lochailort.
A large hutted camp was set up in the grounds to the NE (MHG36636).
S Allan 2007 <3>

Photographs of the entrance to Inverailot 'Castle' were submitted to the HER by Martin Briscoe in September 2010. <4>

Inverailort house was recquisitioned by Lord Lovat as the first training 'school' of Special Operations Executive (S.O.E), specialising in irregular forms of warfare in May 1940. It was known as the 'Big House'. <5>

At the start of the war Christine Cameron of Lochailort House was told that the house would probably be requisitioned so best to offer it as a hospital or a school, but she would not listen. When in London she received a telegram to say that the whole house and estate had been requisitioned. She returned as quickly as possible but all the furniture had been loaded into lorries and taken to Fort William for storage. No inventory was taken. There were storms which washed away some bridges so three of the lorries unloaded the antique furniture and used it to bridge one of the rivers. When she learnt about this she had a heart attack and went to stay with a relative. She died some time later.

Before 1942 Lochailort was an infantry training school under the command of Col. McMaster. The Royal Navy took over the premises in 1942 and renamed it HMS Lochailort. <6>

Photographs were contributed by Martin Briscoe in July 2011 via the Highland HER Flickr group.

Inverailort House was considered for listing in 2007 and again in 2010. It was found that the building did not meet the criteria for listing. <7>