This site was formerly believed to be the site of an 18th-century military camp but is now recognised as a late prehistoric/early historic barrow cemetery with more recent additions. It is one of the best surviving examples in the country. 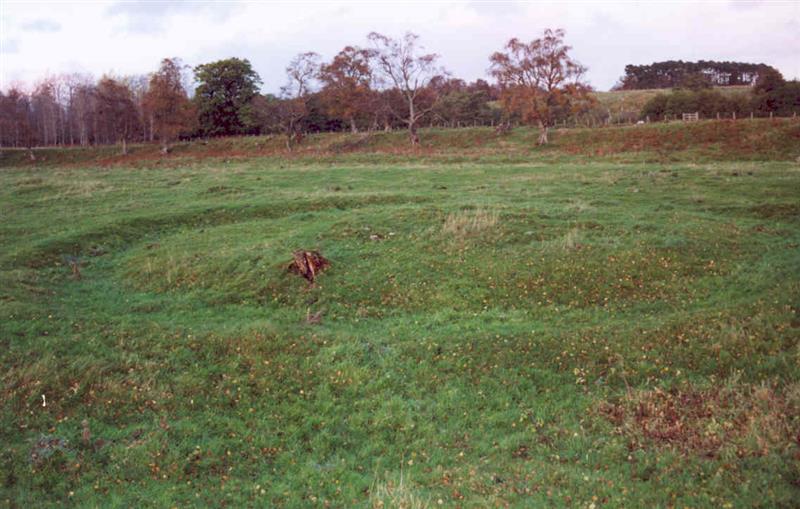 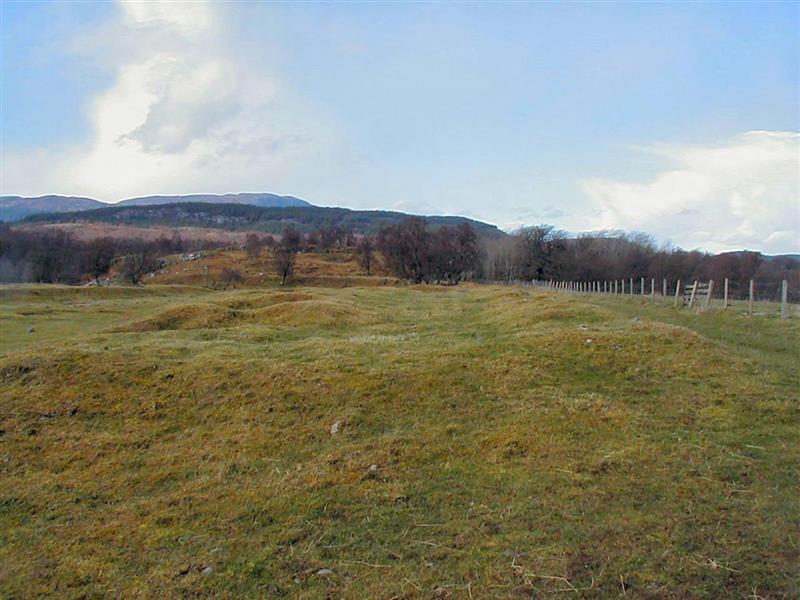 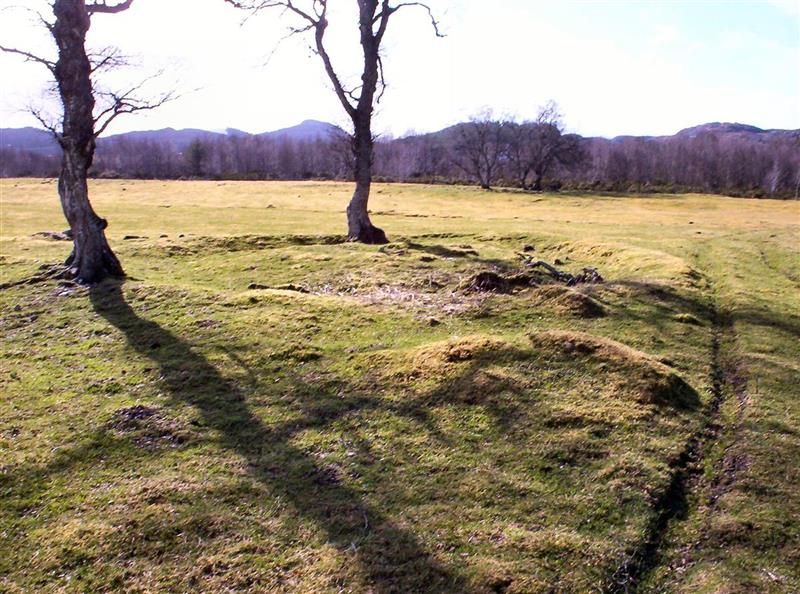 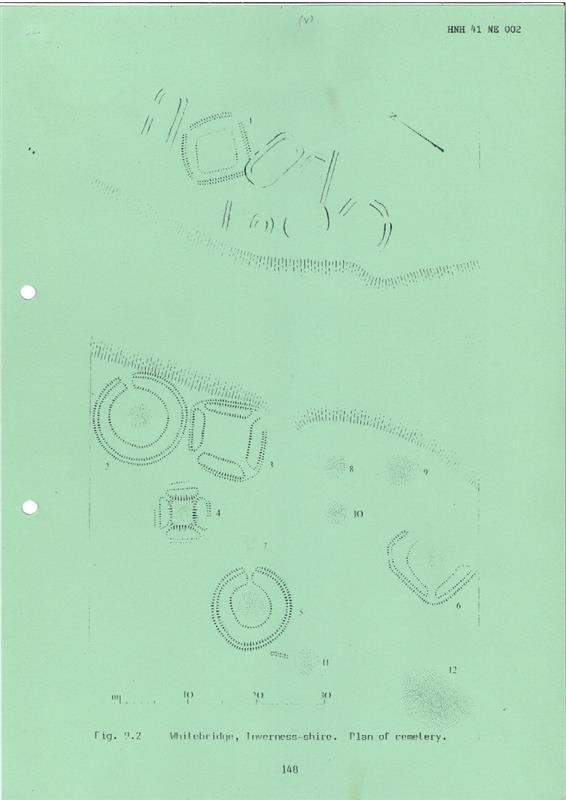 A camp of soldiers was established in 1725 at Stratherrick to report on depredations by the clans. The ruins of it can be seen on a slightly elevated piece of ground, 200 yards by 54 yards, among birch trees flanking the River Fechlin, exactly west of the RC Chapel near Whitbridge.
T Wallace 1886, 1911 <1><2>

The remains of this military camp are at NH 4928 1711 where the footings of a number of rectangular and circular structures (? Tent sites) are visible in a clump of trees, together with some small earthen mounds and a corn-drying kiln.
Surveyed at 1/2500.
Visited by OS (R D) 4 June 1964

These structures were re-examined in the light of new archaeological evidence.
The site is situated on elevated ground, and has been cut by an old, but now dry, channel of the river Fechlin, leaving the group of structures to the W on an island covered by a thin birch wood, and those to the E on a low grassy terrace below the military road.
Wallace's plan is too stylised, and he omits a number of other structures. The site has been cultivated since 1911, thus reducing the structure in height and making interpretation difficult. However, sufficient remains to show that they are a mixture of circular, rectangular, trapezoidal enclosures and mounds.
Wallace's Structure 1: A low circular mound, 1m in diameter and 0.2m high above an encircling ditch 1m wide and an outer bank 1.5m broad and 0.2m high. Near the centre is a mound of stones, possibly later dumping. Its E side has been partially destroyed.
Structure 2: Abutting immediately on the S side of the No.1 is a trapezoidal-shaped low mound enclosed by a ditch and outer bank. The mound measures 5.5m across its N side by 8.5m along its S side, by 7m N-S, and 02.m on height.
Structure 3: 8 metres W of Nos.1 & 2 is a square mound measuring 5 x 5m and 0.8m high, with vestiges of a 0.8m wide ditch at its base remaining on all but the S side.
Structure 4: A rectangular building footing with rounded corners measuring 13 x 5m, now appearing as a grassy platform 0.2m high, although stones around the perimeter indicate the course of the walls. Structure 5: Appears to be a ruined corn-drying kiln 5m in diameter at the W end of a rectangular barn measuring 10 x 5m. The kiln is situated on the edge of this escarpment.
Structure 6: A low circular mound 6m in diameter and 0.4m high above an encircling ditch 2m wide with an outer bank 1m broad and 0.2m high. There is a break in the bank in the NE arc (not SW as on Wallace's plan). There is no apparent causeway across the ditch.
Structures 7,8 & 9: Three stony mounds 6, 4.5 and 6.5m in diameter respectfully with no apparent ditches. They are about 0.7m high. Structure 10: A low, badly mutilated almost square mound measuring 5 x 6m and 0.1m in height with traces of a ditch and an outer bank bounding the N, W and S sides only, the ditch being 1.5m wide. The S side runs off obtusely from the W side.
Structure 11: A large stony mound measuring 10m N-S by 8m transversely and 1m high. Ploughing has cut away the mound on the W side. (It is not rectangular as on Wallace's plan).
Structure 12: One of a complex group of vague structures considerably ploughed down. It is a low rectangular mound measuring 6 x 6.5m bounded by a shallow ditch 0.8m wide and outer bank 1m broad and 0.1m high. Structure 13: Appears now as an open-ended rectangular enclosure formed by a stony bank 8m long on the S, 3m long on the E and 6.5 long on the N side.
Structure 14: A sub-rectangular structure 8.5m long E-W by 3m transversely, formed by a low stony bank. Its relation with No.12 seems to indicate that it is overlying the S angle of the latter, but at the same time its N side seems to have bent in an attempt to avoid destroying it. Additional features not noted by Wallace
Structure 15: A curving fragment of bank apparently forming an enclosure of indeterminate form or purpose, Structure 16: What appears to be badly mutilated remains of a square mound with enclosing ditch and outer bank, the mound being about 5.5m across and the ditch about 1m wide. c/f No.3. Structure 17: Vestiges of a rectangular building (?) measuring 10 x 4m. Its W end has been ploughed away.
Structure 18: A grassy platform 0.1m high and measuring 8 x 3.5m with some stone evident on the perimeter which may indicate a building foundation.
Conclusions: In comparing this site with the Cair Cemetery at Garbeg (NH 53 SW 15) near Drumadrochit, excavated by L M Wedderburn in 1974/5, certain analogies are apparent. The circular and square cairns strongly resemble a number of the features here eg Nos.1,2,3,6,10,12,16, except that the Garbeg sites are slightly smaller in size and do not appear to have outer banks (except in one instance). In addition, the angles of Nos.2,3,10 & 12 seem to have been cut away or never closed, but no corner stones were detected as at Garbeg.
The Stratherrick site has apparently been re-used in more recent times with the introduction of rectangular buildings, enclousres and kiln; but no reason for the utilisation of the circular and trapezoidal structures in the recent times can be given, so for the present, a prehistoric date is postulated. The stony mounds Nos.7,8,9 & 11 may be field clearance dumps, but their close setting within the complex tends to lean to their being probably funerary. Nos.4,5,13,14,15,17 & 18 appear to be associated with later agricultural activities.
Only excavation of some of these structures will determine their identity, but the irregularity of the complex makes the Military Camp tradition less certain now - a more probable location for such being at Whitebridge, 2 miles to the S, where it has been suggested that the Hotel may have been a Kingshouse.
Surveyed at 1:2500.
Visited by OS (J L D) 20 June 1979

This site is one of the best of its kind in the country. It consists of 4 square barrows, 2 ditched barrows, 5 unditched cairns and at least one indeterminate mound. The importance of the site relates to its upstanding remains - the remains visible here represent outstanding survival of this type of monument. The only other site of similar quality and survival to this is at Garbeg, near Drumnadrochit. Early confusion over the interpretation of this site came about through the lumping together of all the phases of use. The combination of elements indicates an early historic/late Iron Age date for the barrow cemetery. This is supported by the presence of extended inhumations. <4>

In 1999, keyhole excavation was undertaken across a threatened part of the site. A small trench was opened at the corner of one of the unditched cairns (no. 9). There was no trace of a surrounding kerb or bank or ditch. No artefacts were recovered relating to the construction of the cairn and no former ground surface was identified which could be used for soil/pollen analysis. <5><6>