The cemetery to St Mary's parish church. Some of the stones are said to have been moved here from Dunballoch when the parish church was re-established here in the early 13th century. 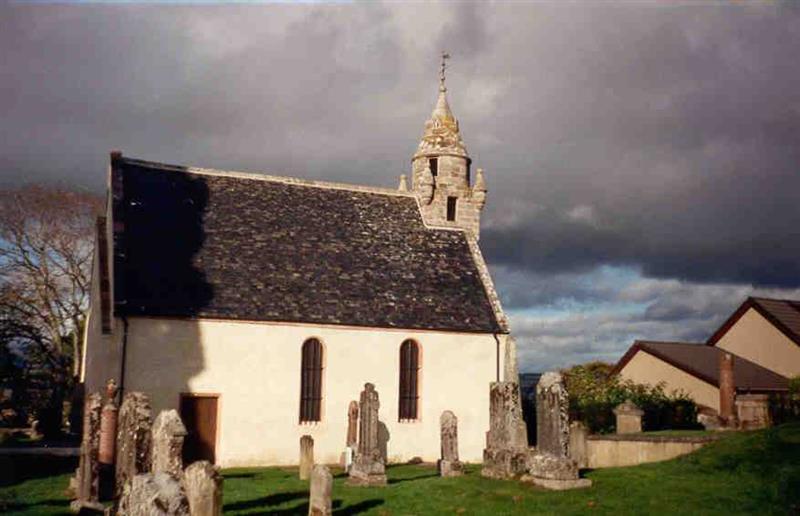 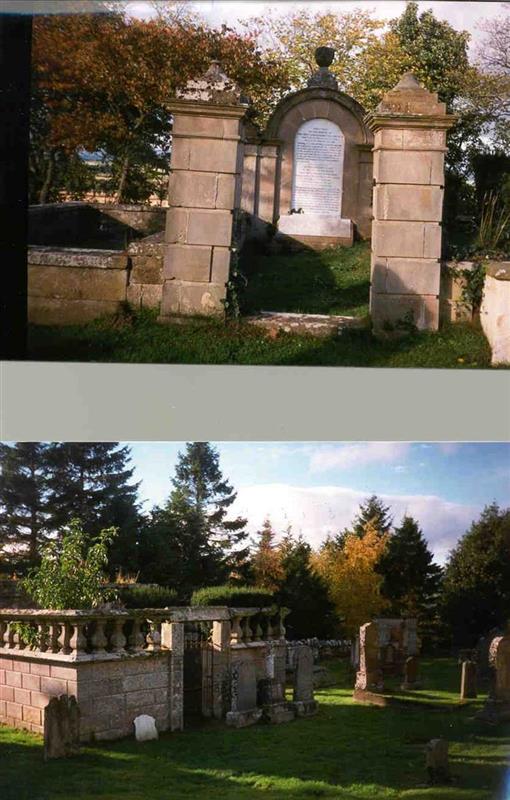 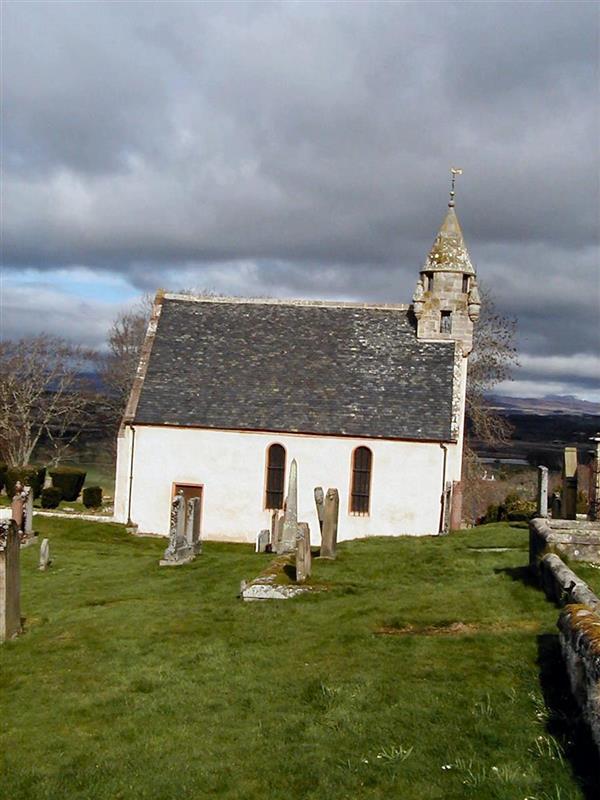 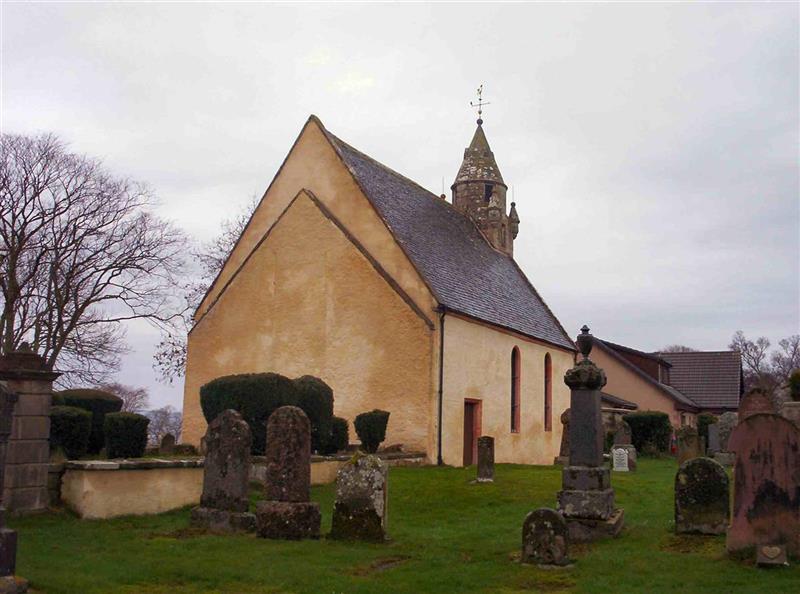 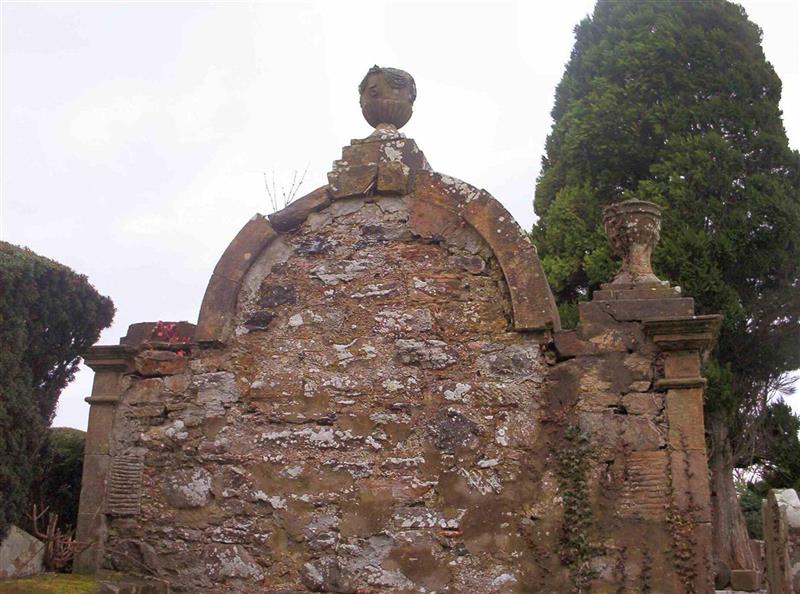 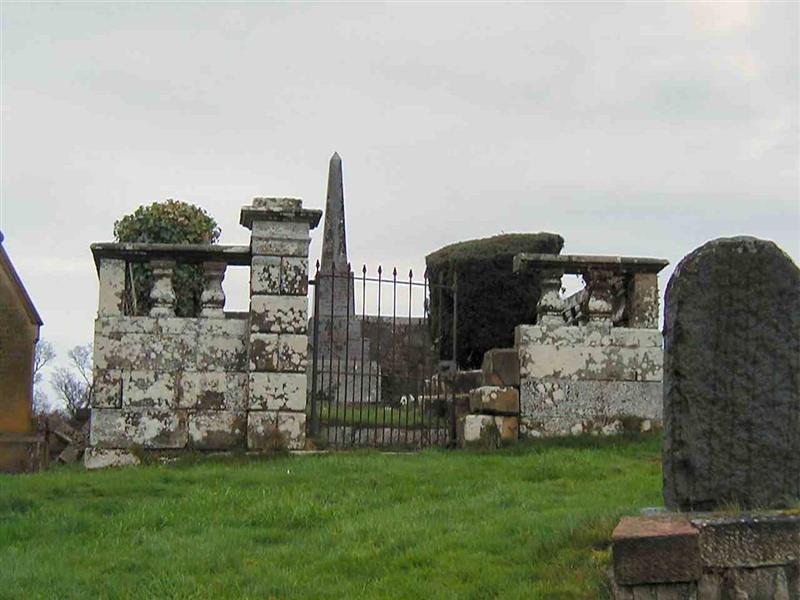 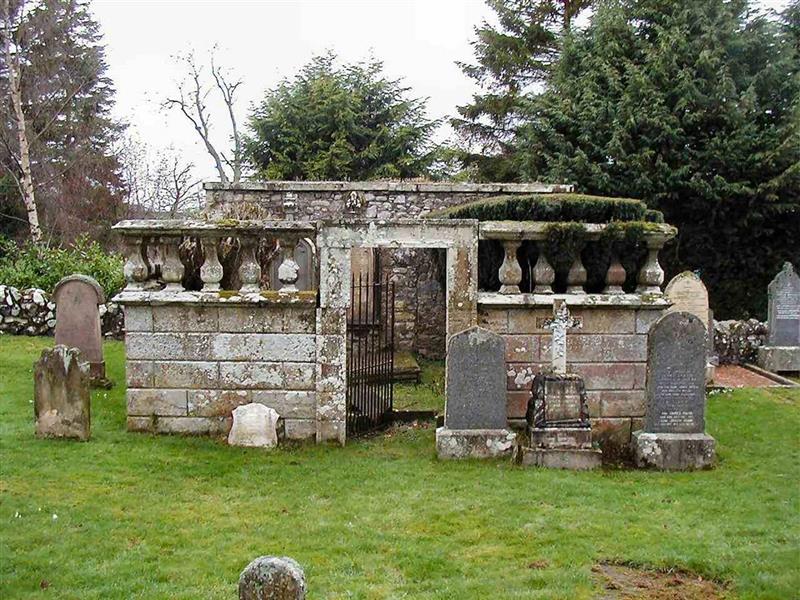 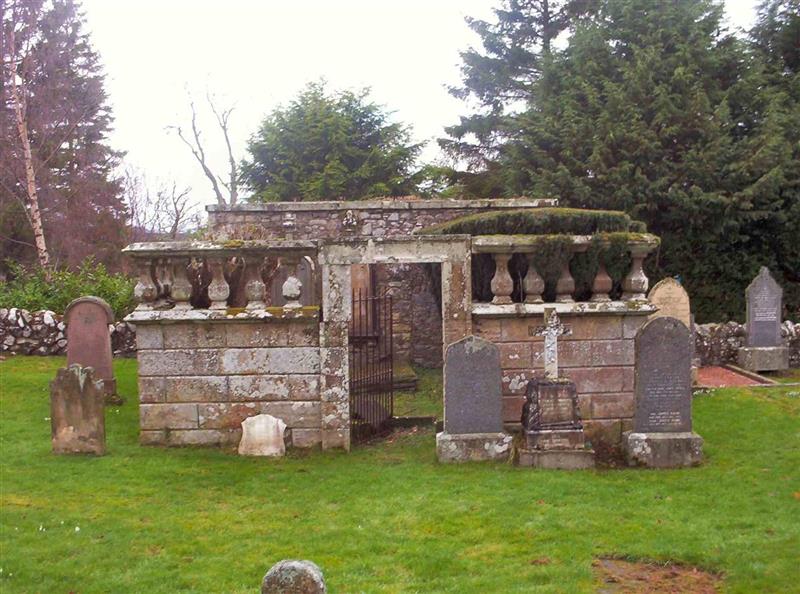 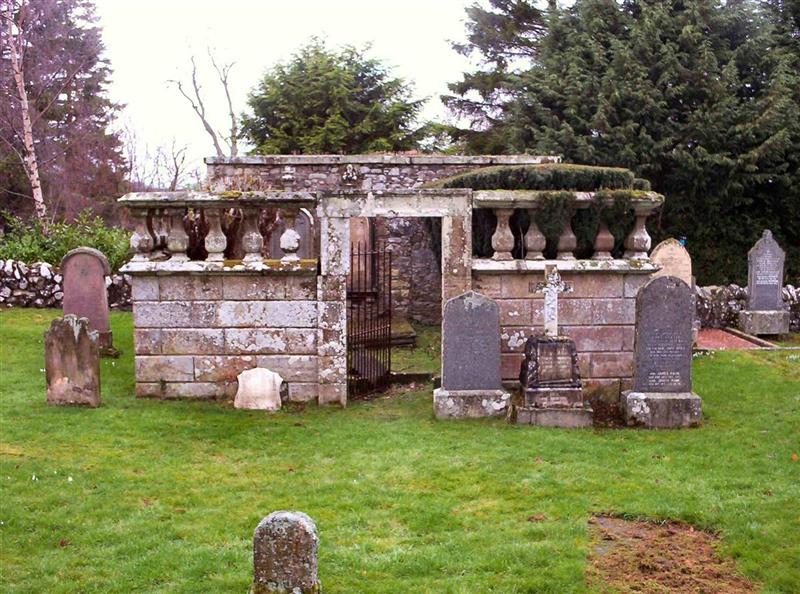 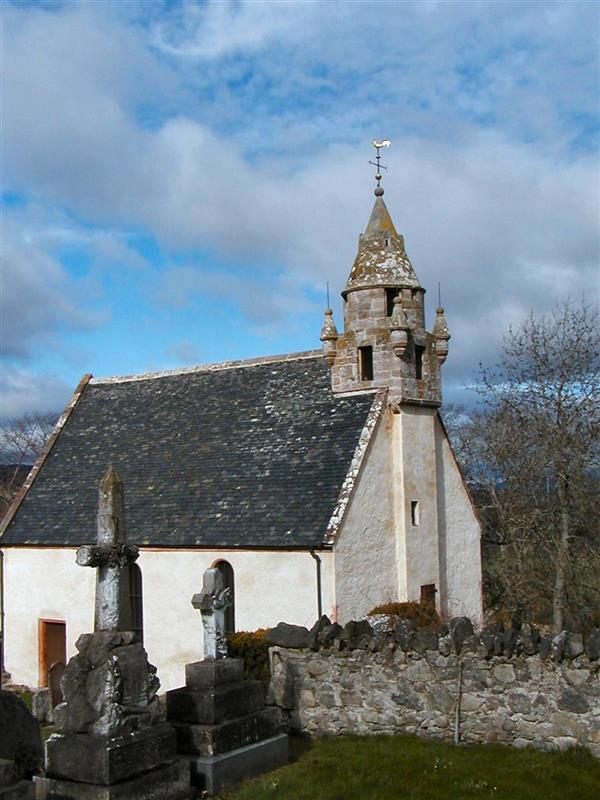 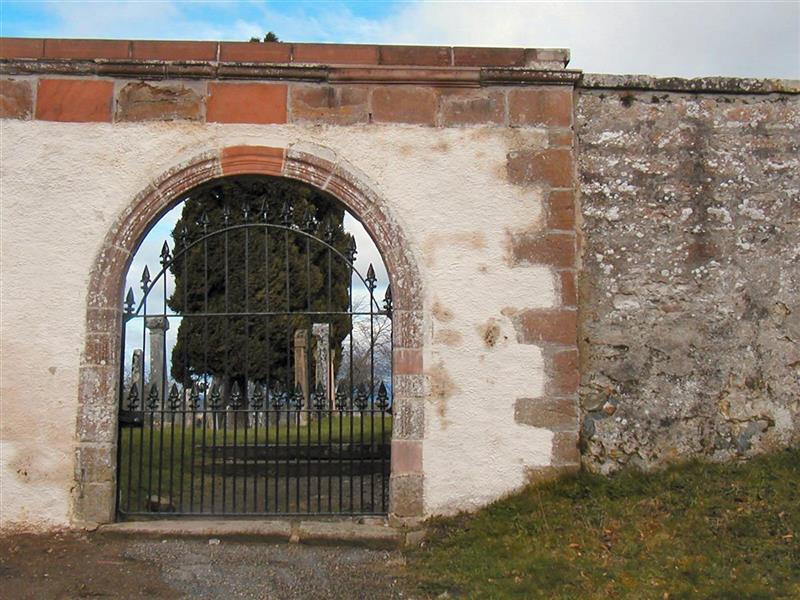 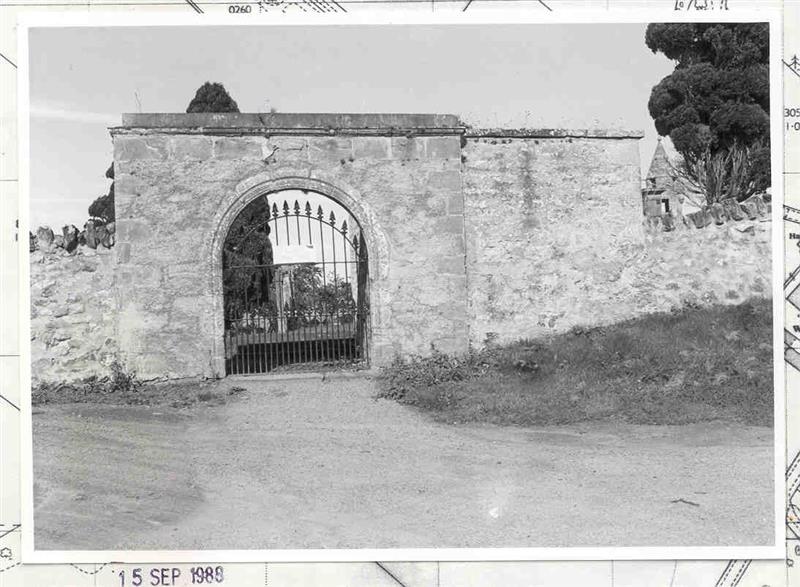 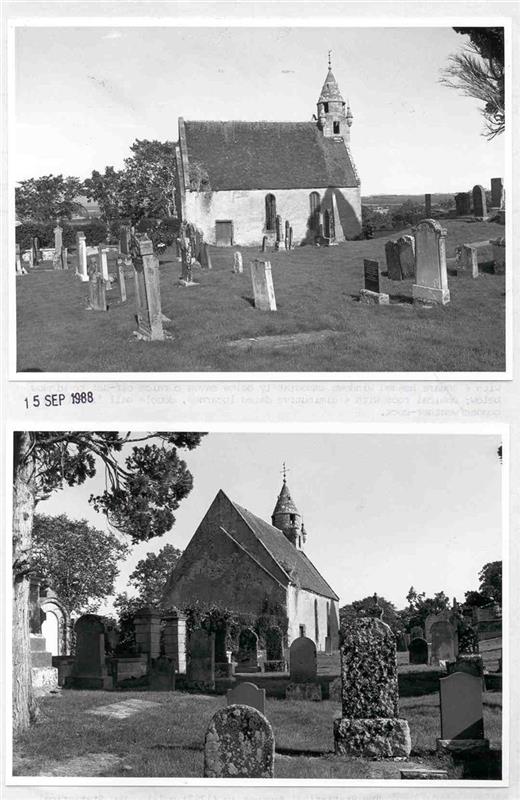 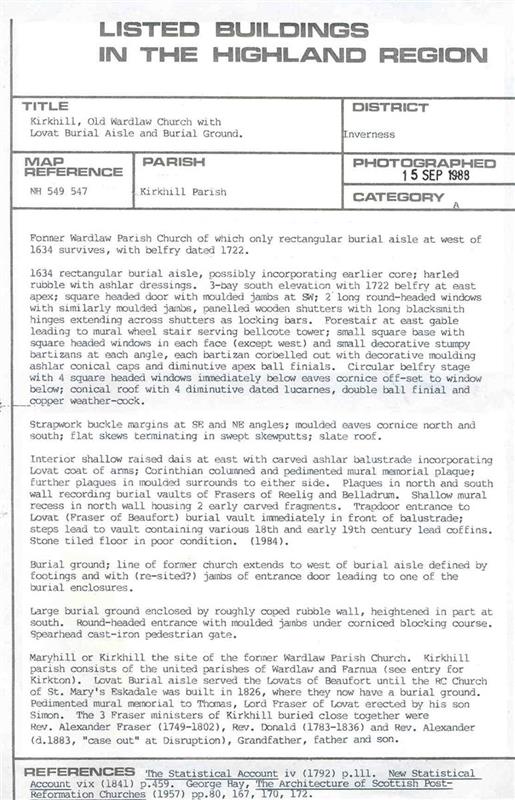 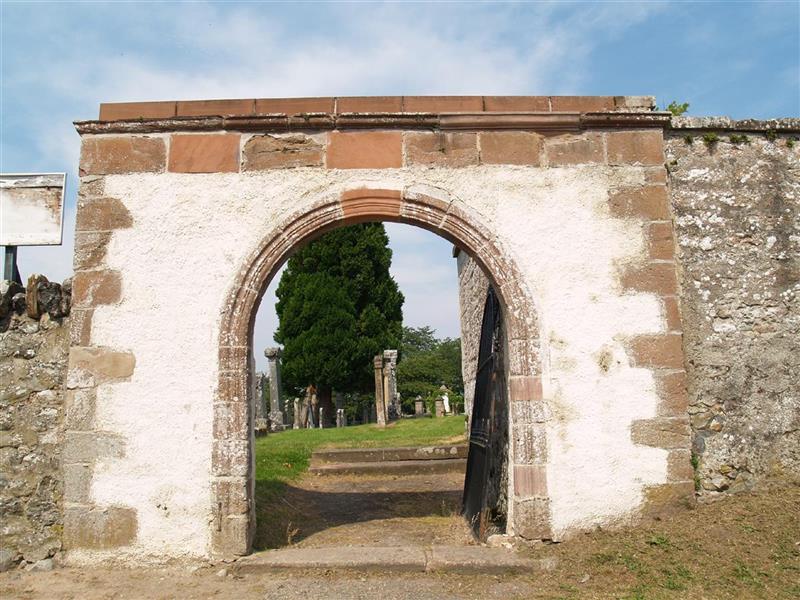 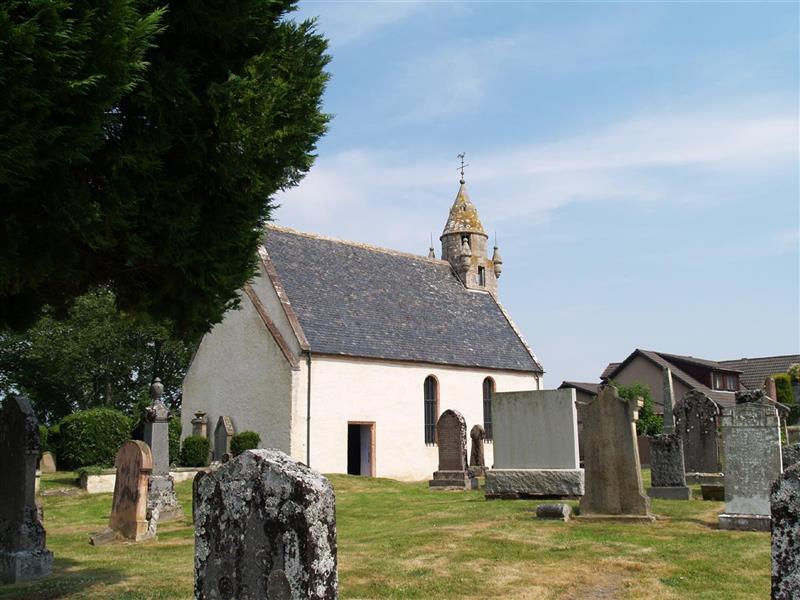 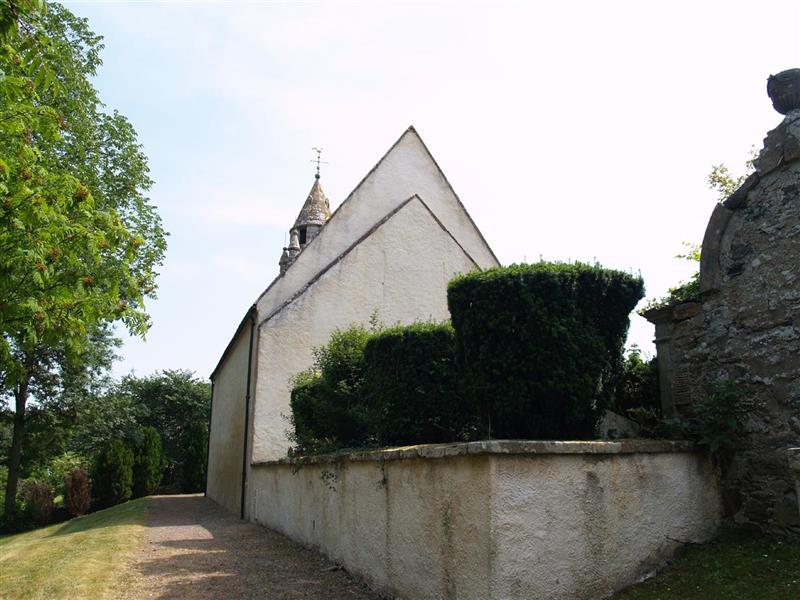 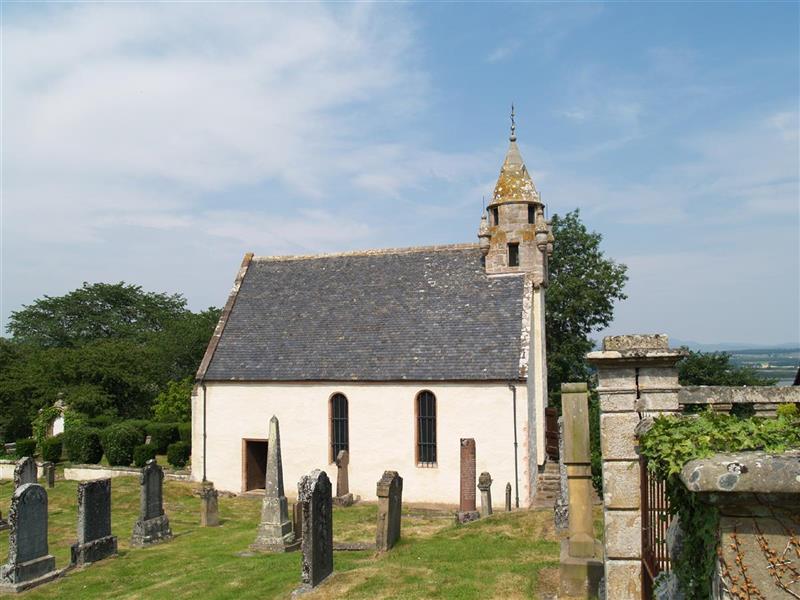 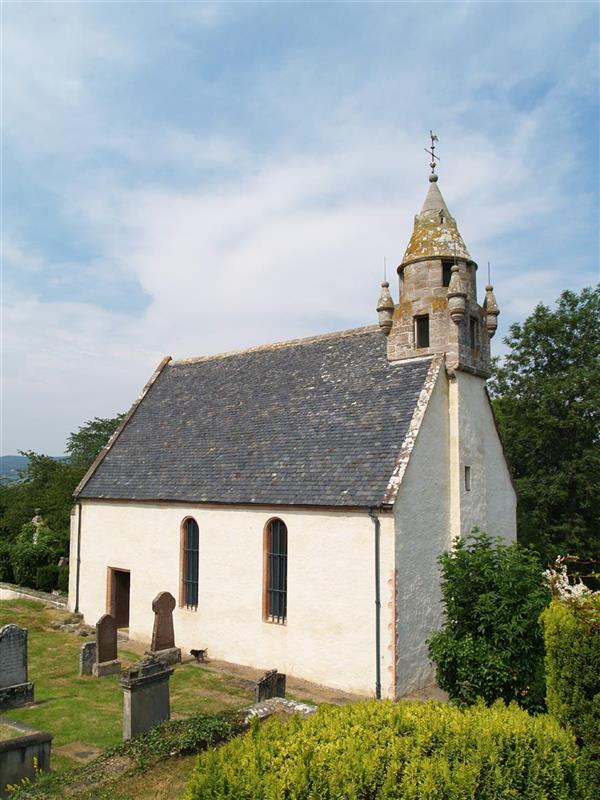 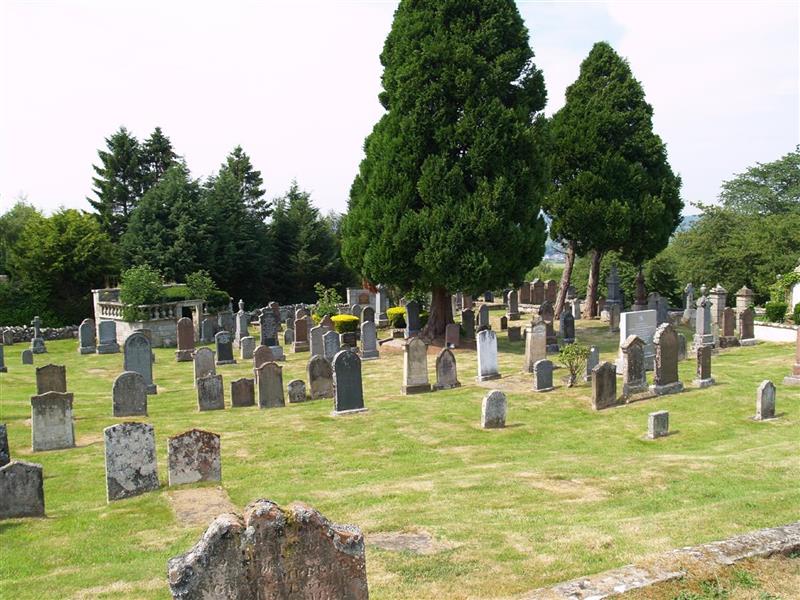 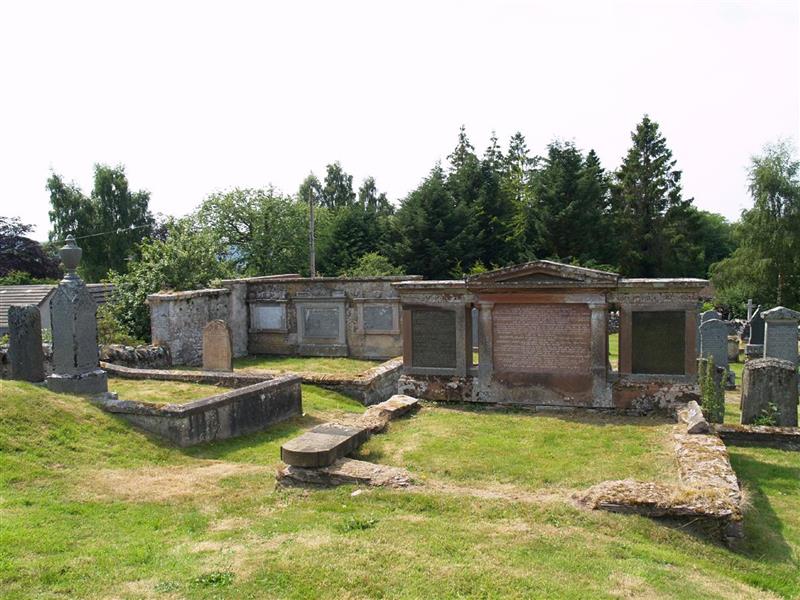 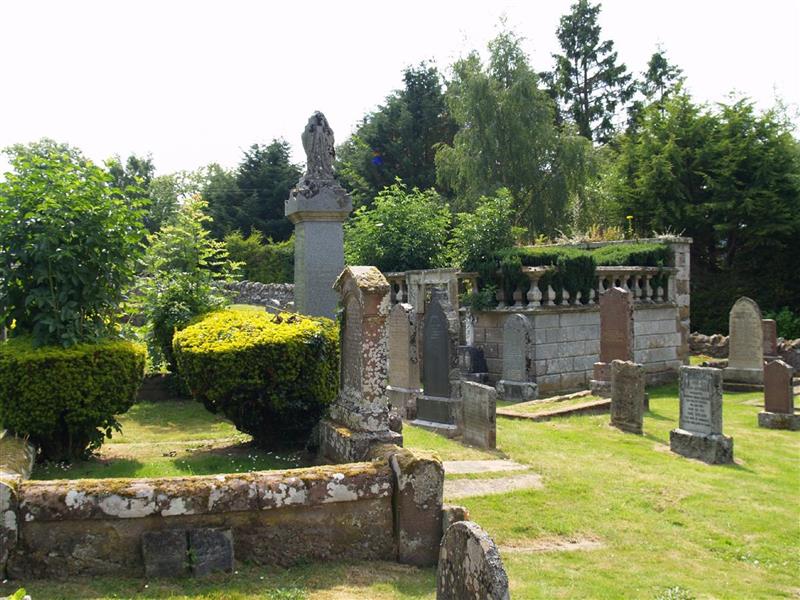 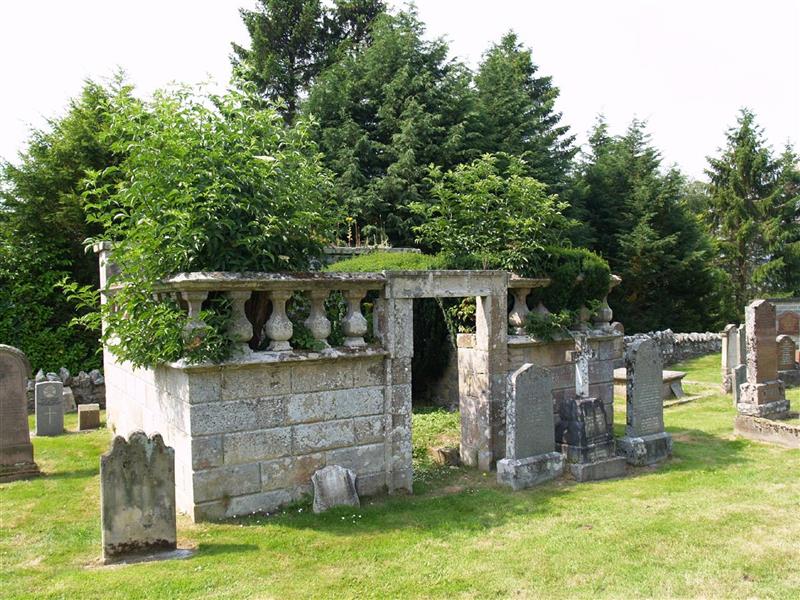 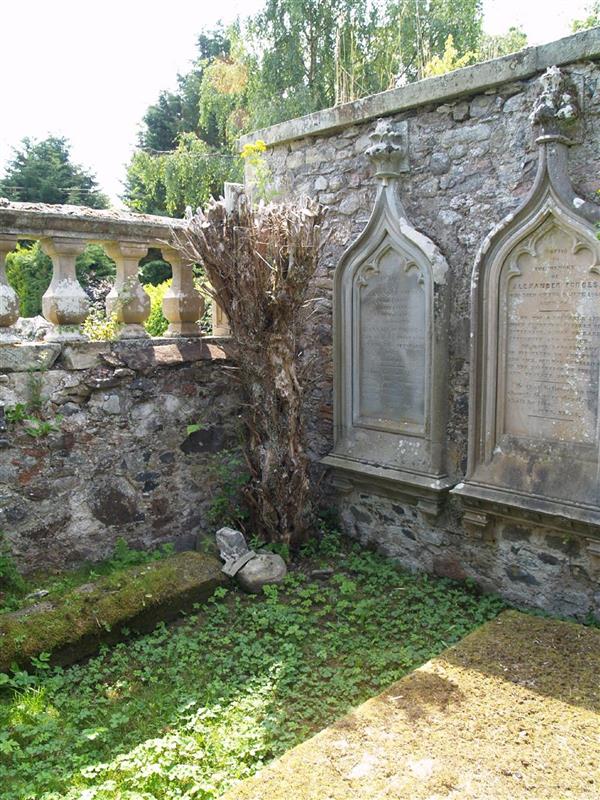 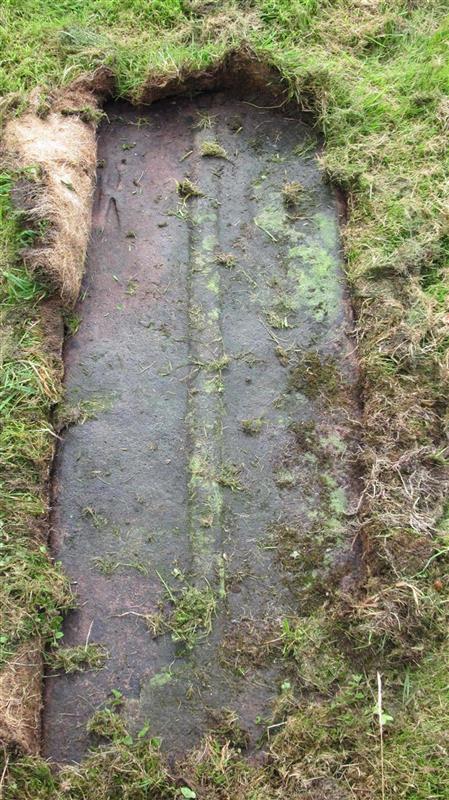 The remains of church of former parish of Wardlaw which was incorporated in Kirkhill 1618. This church, dedicated to St Mary, was successor to NH54SW1 which is said to have been removed 1220.
The remains consist of gable against the west gable of mortuary chapel which was built in 1722. Local tradition says that the tombstones from earlier site were removed to this burial ground, Where Jolly notes numerous cup-marked stones and refers to 'a fragment of a very beautfiul cross'.
T Wallace 1911 and 1886; W Jolly 1882

What appears to be the foundations of St Mary's Church are attached to the W side of the Lovat Mausoleum, and the enclosure is now used for burials of the Frasers of Reelig. It measures 10.3m E-W by 6.6m N-S within walls 0.5m thick. The W wall is partly destroyed, and the N and S walls averaging 1.0m high are topped by a later coping, but the harled E gable is virtually intact and incorporated in the W wall of the mausoleum. According to a notice board the church was built in 1618 when the parishes were united, and there is no ground evidence to support an earlier date. The same notice, however, states that the mausoleum was built in 1634, but the date 1722 is inscribed on the belfry.
The earliest legible grave markers are of the early 17th C. No trace of cup marked stones, nor of the cross fragment. The grave yard is still in use.
Visited by OS (A A) 22 June 1975

The above descriptive information was imported from Canmore when the HER (formerly the SMR) was first digitised in 1995. There are a number of inaccuracies (see details below). <1>

Elements of the above Canmore entry not relevant to discussion of the graveyard have been removed from this record. <2>

'Inverness District West Monumental Inscriptions', pre 1855
Monumental inscription survey completed by Alastair G Beattie & Margaret H Beattie. The survey may not include inscription information after 1855 and each inscription transcribed does not give the full details that appear on the stones, abbreviations used. Some ommissions and inacuracies may be encountered. First published 1993, reprinted 1994.
J Aitken : 20/12/02 <3>

The 1911 Wallace article, mentioned above, includes sketches and descriptions of four stones from this churchyard (nos 6 to 9). Nos. 7 to 9 are believed to date from the last quarter of the 17th century, no. 9 being notable for including a representation of the occupant in the costume of his office (Andrew McRobbie, kirk-officer of Wardlaw).
No. 6 is the earliest of the four, and consists of "a recumbent grave-slab 6 feet in length, bearing in the centre a cross sculptured in low relief, with a wheel-head ornamented with a geometric pattern of incuse triangles, the shaft rising from a calvary base of four steps. In the space on one side of the shaft, about a third of its length from the top, is a symbol resembling a pair of shears, and on the other side a book." See the PSAS article for full details. <4>

The "fragment of a very beautiful cross" mentioned in the Canmore entry, reproduced above, is in fact mentioned by Wallace writing in 1886 <5> and not by Jolly, who only mentions "numerous evidences of cupped stones". Jolly comments that many of the stones here were removed from the "very ancient" burial ground of Dumballoch. <6>.

The above mentioned "fragment of a very beautiful cross" (Wallace's stone number 6) is still in the kirkyard. It does not have as much of the head as is illustrated in <2>. The missing fragment could be under the turf. <7>

An archaeological examination was carried out by Wordsworth Archaeological Services in 1997 in connection with restoration work at this important 17th/18th-century building. As the reconstruction work necessary to preserving the mausoleum required trenches to be dug for drainage, access and services, there was naturally some concern that deposits of archaeological interest might be disturbed. Of particular interest was any information concerning the dimensions and architectural detail relating to the earlier medieval church. Two trenches were excavated, though additional work was recommended. A fine quatrefoil window exposed in the W gable of the mausoleum is thought to be the remains of the window dedicated by Euphemia Fraser in 1341. Other fragments of dressed masonry thought to derive from the medieval church were also found. However, apart from the W gable, no walling incontrovertibly related to the earlier church was revealed. Further work is planned. <8> Awaiting final report on subsequent work.

A programme of geophysical survey was conducted in 1997 by GUARD in the Old Churchyard, in an attempt to detect any buried structures associated with the site of the medieval chapel or any earlier archaeological activity. The results proved largely uninformative due to geological conditions and severe ground disturbance. <9>