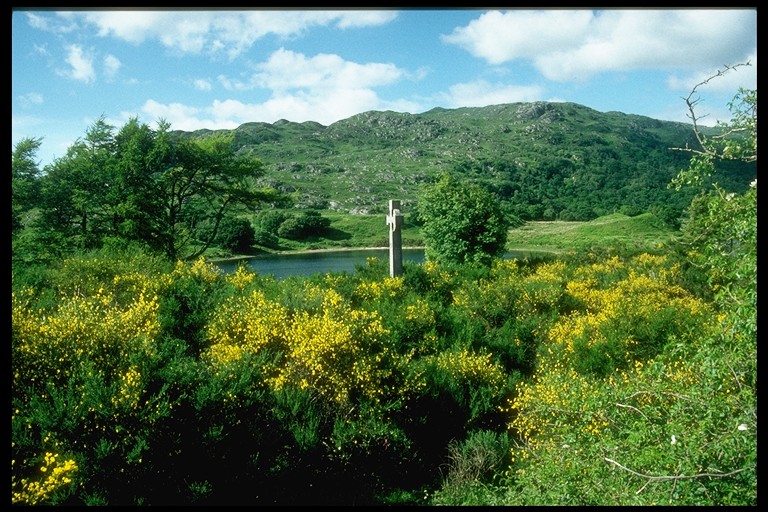 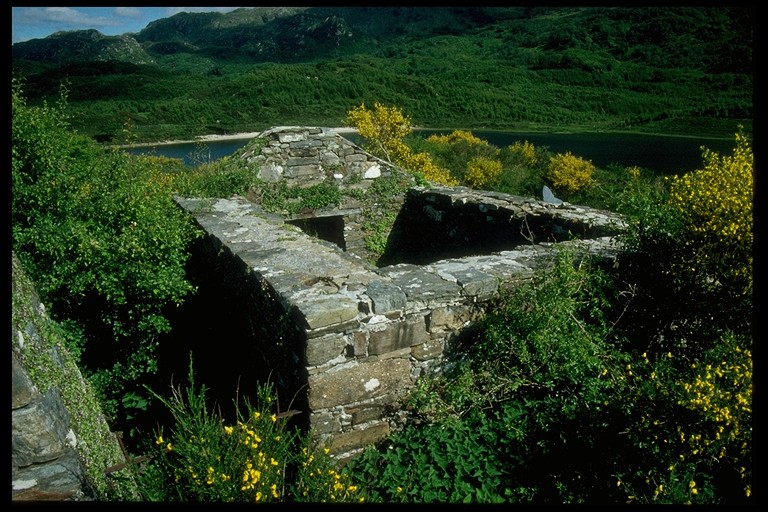 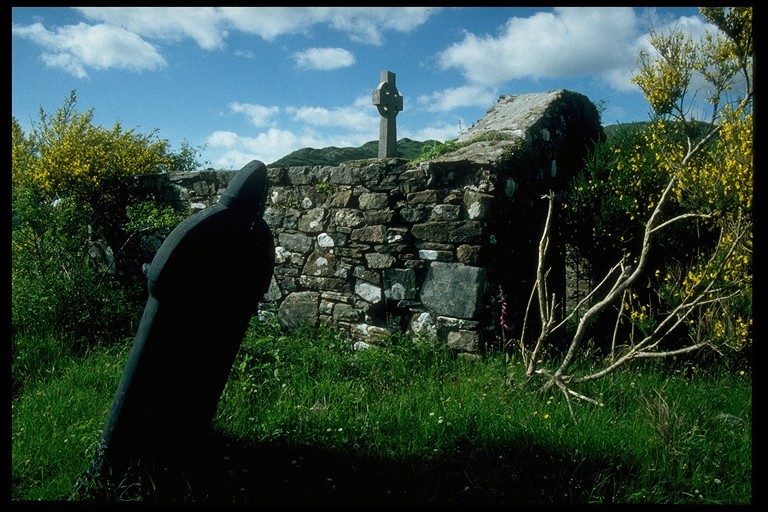 Little is known of the early history of the chapel of Eilean Fhianain. It is perhaps built on the site of a cell which St. Finan had upon the island in the 7th century and the builder is believed to have been Alan MacRuaridh, one of the early Clan Ranald chiefs. The island was the burying place of the Clan Ranalds until the end of the 16th century. The chapel became a ruin by the mid-17th century. The altar, however, remains, and on it stands a 6" high D.A. bell. A circular brass brooch found in the burial ground was donated to the NMAS in 1896. <1> <2> <3> <4>

St. Finan's Chapel (locally accepted name) is oriented E-W and measures 21.0m by 5.6m within a wall which is 0.9m thick and c. 2.8m maximum height. In the N wall are the lower halves of four windows, and near the E end is a square-headed aumbry. In the W wall is the lower part of a window and in the S wall the lower part of three windows, and towards its W end a doorway. The altar and bell remain intact at the E end. The interior has been used for burials.
Visited by OS (R L) 3 June 1970.

A contour survey of most of the island was undertaken in 1992 by CFA after the clearing of the thick scrub that has obscured the island in recent years. A number of gravestones, crosses, the chapel and other monuments were mapped. <5>

'Lochaber and Skye Monumental Inscriptions', pre 1855
Monumental inscription survey completed by Alastair G Beattie & Margaret H Beattie. The survey may not include inscription information after 1855 and each inscription transcribed does not give the full details that appear on the stones, abbreviations used. Some ommissions and inacuracies may be encountered. Published 1993. <6>

Chapel, c.1500 Believed to have been built to replace a wooden structure by Allan MacRuari, 4th Chief of Clanranald, "the dread and terror of all neighbouring clans". Abandoned 17th century, since when all dressings have been robbed. The rubble walls still enclose a stone altar slab, with a seamless bronze bell of Early Christian type (possibly 10th century), a small cross in a niche, plus various important graveslabs, including one much weathered example of the Iona School, c. late 15th century, depicting a sword and foliage scrolls. Among the many monuments scattering Eilean Fhianain in the shelter of hawthorn, larch and Scots pine are several late medieval graveslabs and a group of weathered cruciform stones, probably 18th century. <7>

The chapel and stone crosses were removed from the listing in August 2015 by Historic Scotland as part of a project looking at dual designations of sites in the Highlands, though they remain a scheduled monument. The statutory address was formerly 'Eilean Fhianain, St Finnan's Chapel and Burial Ground'. <8>

An archaeological survey of Eilean Fhianain was undertaken by HES Survey and Recording in 2016 and 2017 as part of the Special Survey programme. See link below to HES Canmore record for further details. <9>