A dun situated on a prominent rocky outcrop west of Loch Bharabhaig. 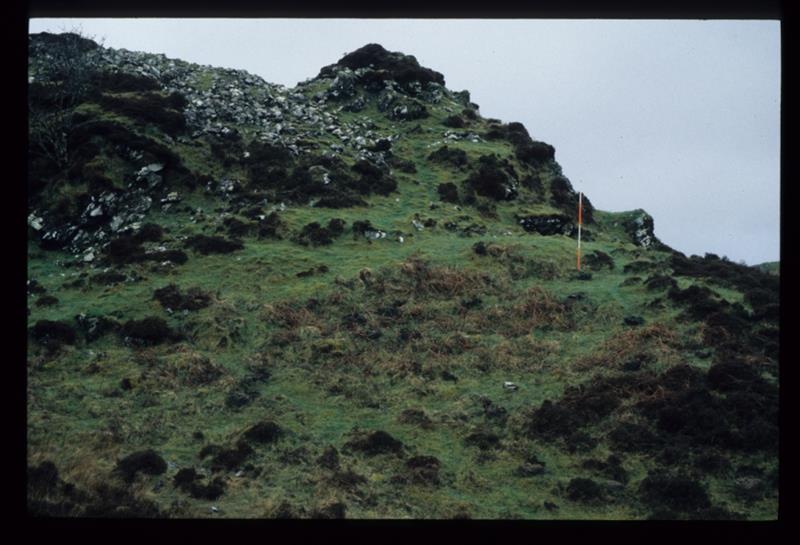 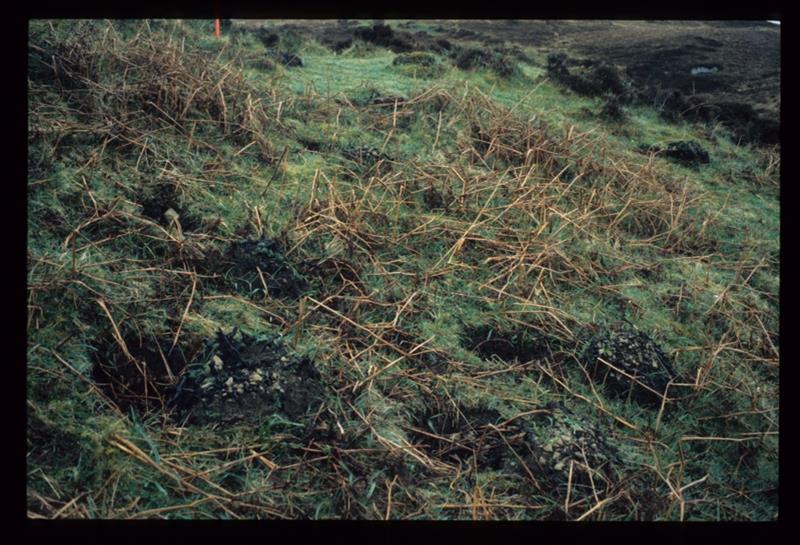 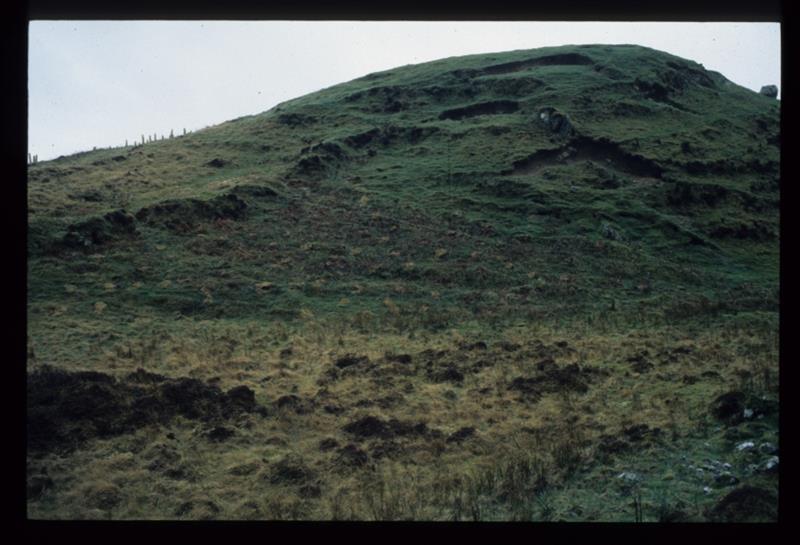 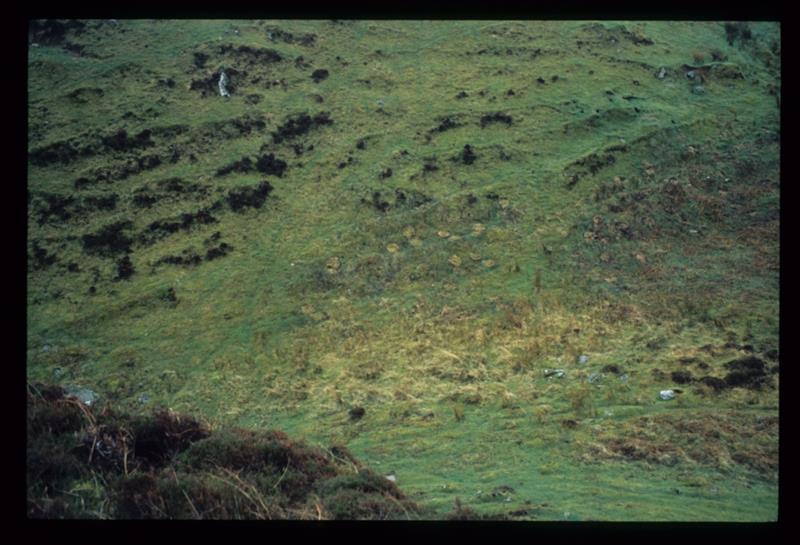 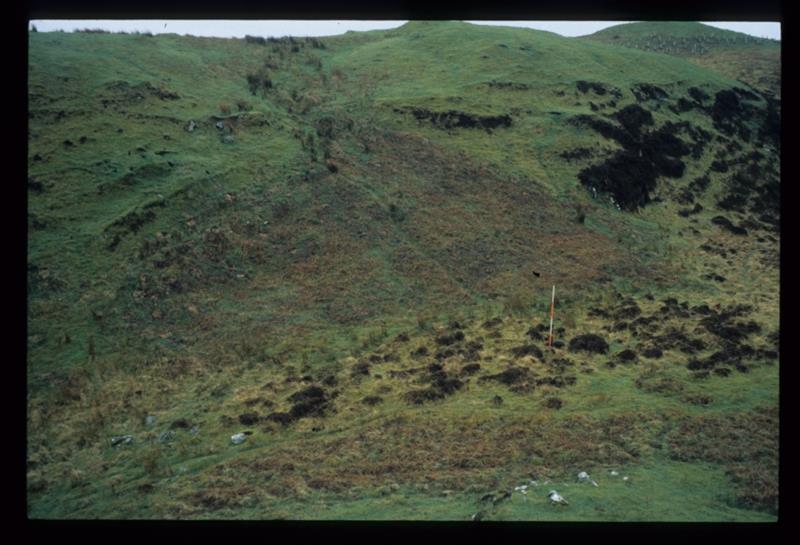 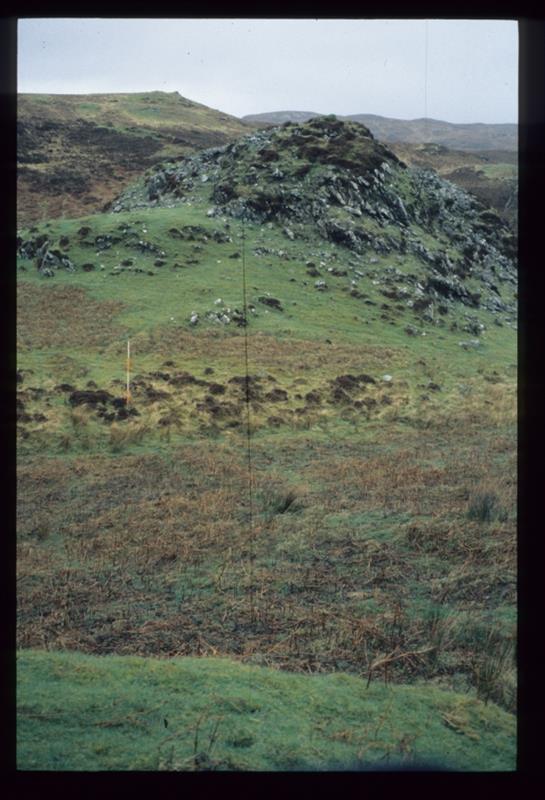 About 300 yards W of Loch Baravaig is a rocky eminence, very steep on all sides exept the S, from which it is approached over a gradually ascending ridge. The pear-shaped plateau on the summit, which stands from 30ft - 50ft higher than the adjoining land and 250ft OD, has been defended by a massive wall of drystone building, which seems to have been about 10ft thick, and which can be traced along its whole circumference, although on its W flank it has nearly disappeared. The best preserved portion is on the E side where the tumbled mass of stone rises 3ft above the interior. The main axis runs NW - SE (this should be NE-SW) and along this line the dun measures internally some 75ft, while it is 34ft across the N and 30ft across the S half. The latter part, which stands about 5ft higher than the former, seems to have been cut off from it by a curved wall, thus forming an inner defence. The fort has been approached over the ridge to the S, a narrow pathway, apparently built up on the exterior, curves round the outside of the SW are the wall for a short distance, when it enters the wall and is carried for a distance of about 30ft between the wall of the inner defence and the outer wall before it reaches the courtyard occupying the N portion of the dun. At the SE corner of the courtyard abutting on the wall is a heap of stones about 10ft in diameter, probably the remains of a circular hut.
On a small plateau about 15 yards to the S and 15ft lower than the enceinte is a circular setting of boulders with an internal diameter of 6ft, while the remains of a wall a few feet to the W of it can be traced running N-S for some 10 yards.
The interior of the dun is covered with grass, but on the top of the drystone wall at both N and S ends is a layer of peat 1ft 6ins thick. RCAHMS 1928.

A dun as described by the RCAHMS and in a ruinous condition. The "circular setting of boulders" is a ruined shieling.
Visited by OS (A C) 14 June 1961.

The dun was visited during a pre- afforestation survey by Martin Wildgoose in 2002. It was recorded as the tumbled remains of a small dun about 300 metres to the west of Loch Barabhaig, on the summit of a prominent rocky outcrop. The outcrop had very steep sides to the north, west and east with the south side less well protected. The remains of walling were everywhere, very tumbled with the best-preserved sections facing to the south were they appeared to be 2 - 3 metres thick. The interior, which was on two levels, measured 22 metres north-east to south-west by 9 metres south-east to north-west. A possible entrance survived at the north-east end. Mounding had been carried out on the north-east slopes of the outcrop on which Dun Barabhaig stands. <1>

This site was included in the Atlas of Hillforts of Britain and Ireland online database. See link below for site entry. <4>