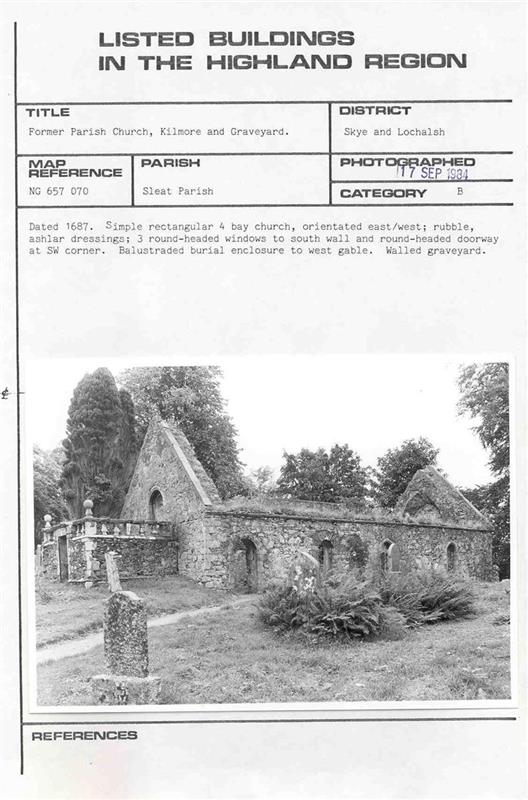 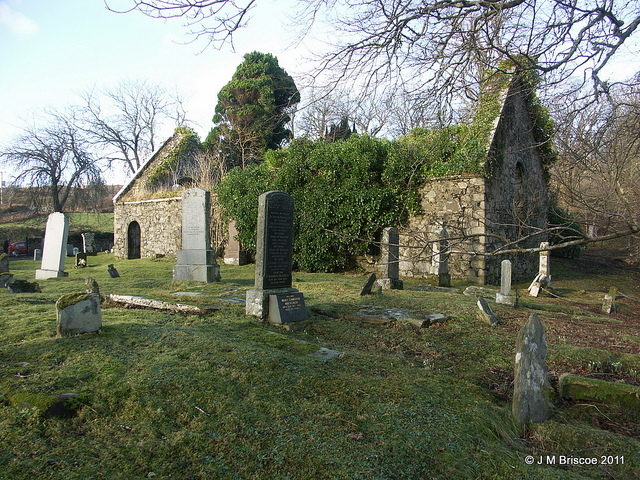 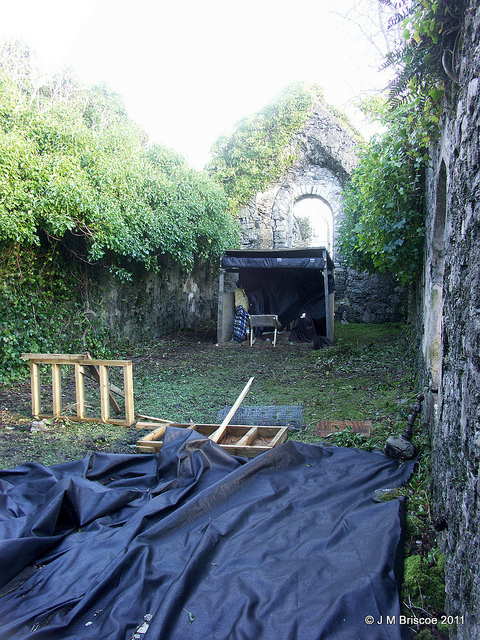 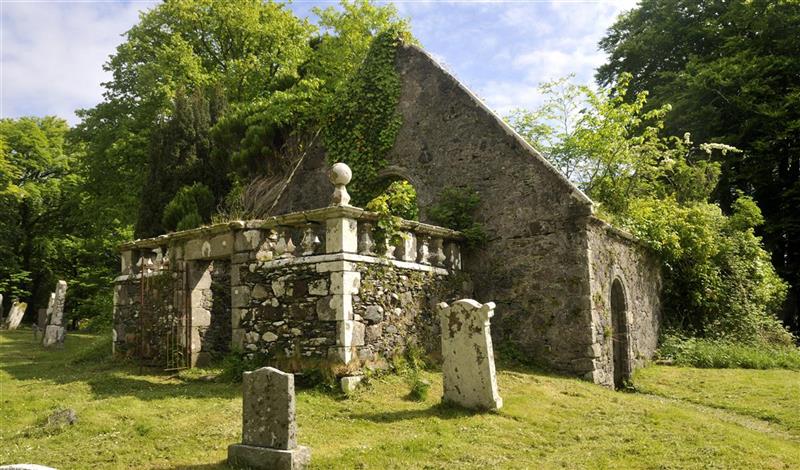 Old Parish Church of Sleat, Kilmore. It is rectangular on plan and measures 55ft in length and 20ft in width. The church is now a roofless shell with gables, 3 1/2ft in thickness, still retaining their tabling, and the side walls, 2 3/4ft in thickness, remaining to their original height. The door, which is towards the W end of the S wall, the E and W windows, and two side windows have had their rounded heads and jambs moulded. The E window has widely splayed sconsions and a pointed rear arch, but the W window is much destroyed. A stone in the W gable bears the date 1687 (RCAHMS 1928).
The first church is said to have been built by a Canon of Beauly, Crotach mac Gille Gorm, early in the 13th century and to have been in use until the early part of the 17th century when, in a fight, the church was deliberately fired in order to destroy those who had taken refuge in it. The second church was built in 1681, according to the Old Statistical Account (1792) (Muir 1885) completed in 1691, and was used until 1876, when the present church was built (Gordon 1950)
T S Muir 1885; RCAHMS 1928; S Gordon 1950.

"The earliest recorded church at Kilmore is said to have been built by a priest called Crotach MacGille Gorm who was a canon of Beauly Abbey. It dates from the early 13th century. This church was in use until the early 17th century when it was burned down during a battle between the MacLeods and the MacIntyres, a sept of Clan Donald. The battle took place in a field near the church. The MacIntyres were put to flight and ran for sanctuary into the church. The pursuing MacLeods barricaded the doors and burned the heather-thatched church to the ground with the MacIntyres inside it. There is no trace now of this building.

The second church at Kilmore, the ruins of which still stand in the churchyard, was built around 1681 at the behest of Sir Donald Macdonald of Sleat. This was the church visited almost a century later by Dr Johnson and James Boswell on their tour of the Hebrides. Boswell writes “I walked to the parish church of Slate, which is a very poor one.” However he was very impressed with the monument in the church in memory of the young late chief Sir James Macdonald (a monument later transferred to the present church). Boswell refers to Sir James as “this extraordinary young man , whom I had the pleasure of knowing intimately” and he quotes the inscription in full in his “Journal”.

The Old Church was in constant use until 1874, by which time the building had fallen into serious disrepair and Lord Macdonald agreed to the building of a new church. The third and present church at Kilmore was opened in 1876, large enough to hold six hundred worshippers. This church was in regular use until by the mid 1980s it was in a state of poor repair and was threatened with closure. However a group was set up to save Kilmore as a place of regular worship and as a result of vigorous fundraising, and awards from several Trusts, a sum of £40,000 was raised for the restoration of the church.
There is a plaque in the foyer of the church which commemorates the magnificent contribution made by the Friends of Kilmore, both at home and abroad, to the repair and restoration of the church."
(from research published on Sleat Local History Society website)

Martin Briscoe has submitted photographs of this site to the Highland HER Flickr group. <2>