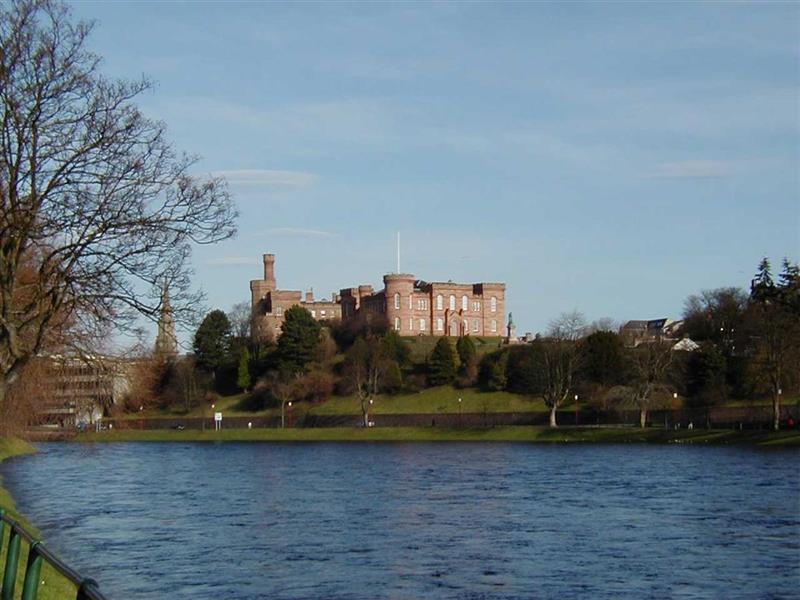 Photo from across river © The Highland Council 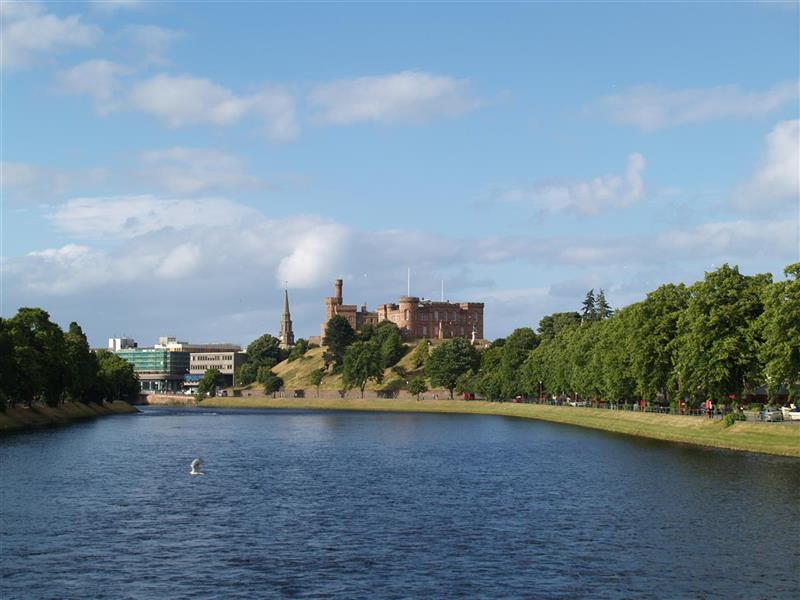 The castle of Inverness, on Castlehill, is said to have been built variously by David I c.1141 (E S Armitage 1912 and Inverness official Guide 1957), or by Malcolm Canmore (11th century) (F R Fappie 1908 and OSA 1793). It has been occupied by Edward I, Bruce, James I, III, & IV, and in 1562 was attacked and razed by Mary, Queen of Scots. It was again almost destroyed by the Royalists in 1649, and was finally destroyed by Prince Charles Edward in 1746. Additions were made to it between 1508 and 1540. All that remains of the old castle is the well, discovered and restored in 1909, the stairway leading to Castle Street, and part of the old rampart wall between Castle Street and the Castle Hill itself. The present County buildings were built on the site in 1834-46 (Inverness Official Guide 1957 and G Eyre-Todd 1923). The original castle was a square tower (R Pococke 1760), and in the reign of George II, the site was transformed into a square by adding barracks on each side and a governor's house on the north side. There was also a chapel and other buildings on the south side of the castle.
F R Frappie 1908; OSA 1793; J Grahame 1831; J Anderson 1831; E S Armitage 1912; Inverness Official Guide 1957, G Eyre-Todd 1923; R Pococke 1760.

No trace of antiquity remains about the present buildings on Castlehill, except the well in the courtyard.
Visited by OS (W D J) 1 April 1960.

REFERENCE SRO:
Fortification.
Theodory Dury's report on what is required to put Inverness in a fit state for defence by the building of pallisades.

In the National Library of Scotland is a series of Military Maps and Drawings (many are coloured) of the Board of Ordnance and relating to the Works executed in the disturbed times of the 18th Century.
Included are the following relating to Fort George at Inverness:-
In Case or Volume, No. 1647:-
Number. Year.
Z.2/76. No date. "A Generall Survey of Inverness and the Country adjacent to the foot of Loch Ness". With Explanation and view of the Town. Scale 1500 Feet to a Inch. There are 2 copies.

Z.2/78 No date "Inverness in North Britain, by Brigdr Petite. Is a Plan of the Town, with the Castle Hill, and shewing Oliver's Fort. Scale 200 Feet to an Inch. There are 2 copies.

Z.2/82 1746 "Plan for building a Fort at Inverness on the Vestige of an Old Fort demolished 1746. With Profile and References. Scale for Plan 100 Feet to an Inch and for Profile 30 Feet to an Inch. There is a copy.

Z.2/83 1746 "A Plan of a New Fort design'd for Inverness, done exactly on the old lines of Olivers Fort; with the additional Outworks of Cover'd-Way, Lunettes & Glassis" With Explanation. Scale 100 Feet to an Inch. Also Sections and Profiles to scale of 10 Feet to an Inch. The Blocks are numbered, and both drawings are docketted as "Rec'd with Major Lewis Marcell's Report & Estimate dated 1746"

Z.2/79 1746 "Elevation of the Main Gate or Entrance on the Rampart to the Fortress". Docketted as "Received with Major Lewis Marcell's Report & Estimate for building a Fort at Inverness 1746".

" " "Plans Elevation and Section of the Powder Magazine. Magazines for provisions, Baking Houses, &c". Scale and docket as before. Marked No. 3 on the General Plan.

" " "Plans Elevation and Section of the Arsenal & Armoury". Scale and docket as before. Marked No. 4 on General Plan

" " "Plans and Elevation and Section of the Hospital". Scale and docket as before. Marked No. 5 on the General Plan.

" " "Plans Elevation and Section of a Pile of Barracks for Soldiers. Scale and docket as before. Marked No. 6 on General Plan.

Z.2/34. 1732 "A Plan of Fort George & Part of the Town of Inverness, with propoer Sections relating to the Fort, surveyed and projected by John Remer, Anne 1732". With Elevations and Sections, and with Explanantion. Scale for General Plan 100 Feet to 1 Inch and two-twelfths, and for Sections 20 Feet to an Inch. There is a copy.

Z.2/35. 1739 "A Sketch of Fort George 1739", Inverness, shewing a breaching of the retaining Wall at River side. Marked as received from Captn Remer.

Z.2/36. 1750 "Plan of Fort George at Inverness shewing its present position 1750". With Explanation. Scale 20 Feet to an Inch. Surveyed and drawn by Chas. Tarrant, and signed W.Skinner. There is a copy.

Z.2/37. No date "Sections of Fort George, Inverness with part of the Town of Inverness". Scale 20 Feet to an Inch. Taken and drawn by Chas. Tarrant. Signed W.Skinner. There is one copy.

Z.2/38. No date "A Plan and Section of Fort George with part of the Town of Inverness". with a small Section, and with an Explanation. Sclae for Section 40 Feet to an Inch. No date, but considered prior to 1750.

The condition of the Castle of Inverness.
The Lord Advocate is averse to demolition in spite of the Castle going 'a complete ruin'. An interdict is passed to prevent the Duke of Gordon demolishing it. Meanwhile Mr Campbell is to inspect and report.
1777 GD 44/Sec 22/Bundle 31

Report on the condition of the Castle of Inverness.
Ilay Capbell suggests that the East Wing should remain as it was, as the people of Inverness think it ornamental.
1777 GD 44/Sec 22/Bundle 31

The removal of stone from the Old Castle and its ramparts.
A list of people of Inverness, guilty of carrying off the materials of the Castle with a note of what each person has built with what was taken.
1777 GD 44/Sec 22/ Bundle 31

Inverness. Painting of Inverness Castle.
Petitions to Queen Anne by George 4th Marquis of Huntly. narrates that the Garrison put into Inverness Castle after the Revolution in 1688 'defaced the painting of the castle which was done by Italian-masters at the sole expence of the Earls of Huntly'.
GD 44/22/31

Damage to the Castle by a Garrison of Foot [1688] 'The said Garrison without regard to any law civil or military first defaced the painting of the Castle which was done by Italian masters at the sole expense of the Earls [? Marquesses] of Huntly then tore down the wainscott lining of the rooms, pulled up the flooring and tho' of no use to themselves and tho' it required some labour too they cull the very Beams and Joists and With Great Iron Hammers broke down the steps of the Great Stair of the Castle tho' made of stone...'
Petition, Marquess of Huntly to Queen Anne
(ND) GD44/22/31/20

Removal of the stones of the Castle.
Peition to the Sheriff and complaint from the Magistrates against Capt. Alexander Godsman [The Duke of Gordon's Factor at Dunain] followed by a Summons for demolishing and taking away stone from the Castle.
1777 GD 128/6/2

Removal of the stones of the Castle.
In a Bill of Advocation the Duke of Gordon replied that after 1745 the Castle, having been blown up with gunpowder, was demolished. Since then it had been of little use except as a quarry. The inhabitants of Inverness had pilfered the stone so the Duke had ordered his Factor, Alexander Godsman, to use the stone to enclose the Duke's land adjooining the Castle.
1777 GD 128/6/2

Report on the condition and demolition of the Castle.
The Easter Gavell is reported to be in dangerous state but no more so than it was before the operation of digging by order of Alexander Godsman, the Duke of Gordon's Factor at Dunain. Robert Duncan in his report accepts that Godsman's method of taking down what remained of the Castle is the only safe one.
1783 GD 128/6/2