A Bronze Age dirk was found with two socketed axes under a granite boulder at Kincardine in about 1873. 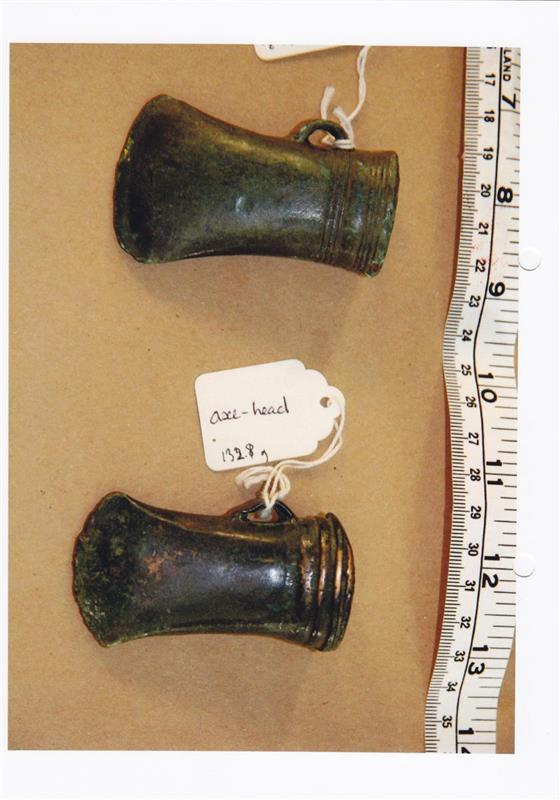 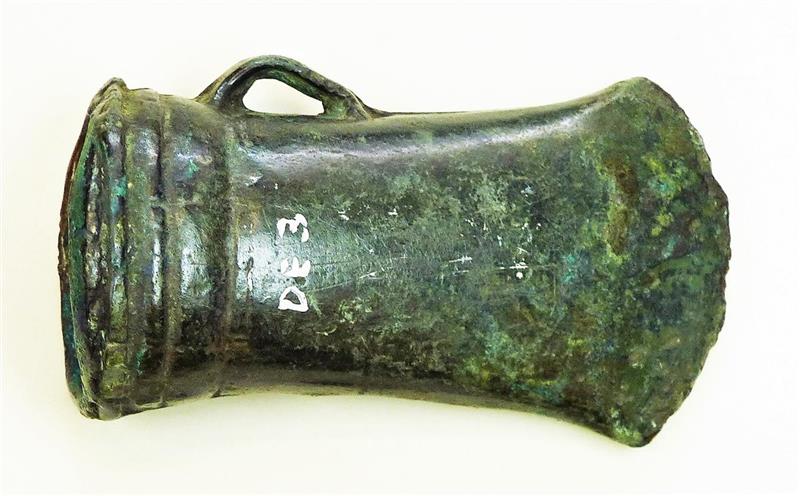 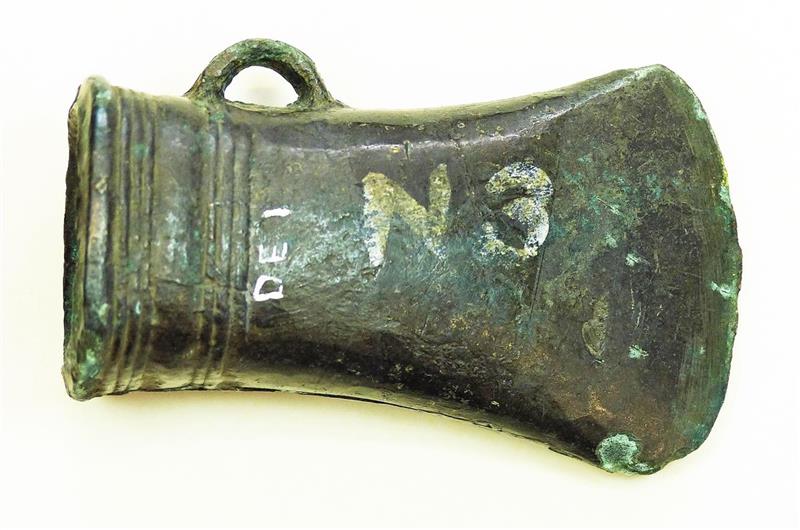 This group, comprising a dirk and two socketed axes, is said to have been found about 1873 by a Mr Smith, Grantown, under a granite boulder at Kincardine, Abernethy (NH 9417). There was, apparently, a local tradition that Colonel John Roy Stewart hid his arms and flags there in the aftermath of Culloden; the finder stated that there were the remains of silk cords attached to the loop of the axe-head and believed that it was a relic attached to Colonel Stewart's flagstaff. The group was donated to Am Fasgadh in 1951 by the executors of the late Miss Peace, Grantown-on-Spey, and is now in the Highland Folk Museum, Kingussie under accession number KIGHF: DG 1 (N4).
The small dirk is largely complete, though very worn, and the hilt is damaged. On one face there are two casting faults where the surface is missing. Remains of very dark patina on a bronze surface suggest a water deposit. There are traces of two rivet notches high up on the hilt, and possible remains of another lower down on one side. The hilt is flat and bevelled edges converge to a midrib which extends to the point. The blade is broader at its tip than at the centre. Dimensions: length 117.2mm; width 34.4mm; thickness of butt 3.2mm; thickness of blade 3.8mm. Despite its small size and relatively poor condition, this dirk can be attributed to the Cornacarrow group of Burgess and Colquhoun's Group IV, and compared to an example in the National Museum of Ireland.
It is difficult to assess the significance of this group of material; the apparent association of types of Middle and Late Bronze Age date argues against a formal "hoard" deposit, but in the light of the circumstances of the discovery under a prominent boulder, it is possible that the group could reflect metalwork deposited on more than one occasion in antiquity. The association of the metalwork with Col. John Roy Stewart is intriguing but probably spurious (perhaps reflecting the power of the "45" to sway the heart rather than the mind), while the supposed remains of silk cords doubtless represent further uncritical embroidering of the traditional associations of the place. It is just possible that traces of organic fibres had survived but, equally, in his enthusiasm, the finder may simply have misinterpreted plant fibres (eg fine rootlets) adhering to the metal.
Information from Mr B O'Connor and Mr T Cowie, 10 January 1995. <2>

The discovery of this dirk may be linked with that of two socketed axes (NH91NE 4). The following unpublished sources refer:
(1). John Coles card index: dirk - midrib; drawing and details ent by George Davidson 12.9.1966 - found together Kincardine on Spey with 2 socketed axes? 6.5 miles SW Nethybridge, on Spey.
(2). NMAS green card: small bronze dagger or reduced rapier, L [not given]; a midrib diverges 2" from the butt to follow the outline of the blade; traces of three out of four rivet holes remain. Found in 1875 under a granite boulder in Kincardine-Abernethy, Inverness-shire in a spot where Col John Rory Stewart was reputed to have hidden his arms and flag. Acquired by Am Fasgadh, 1951.
(3) Highland Folk Museum, Kingussie: details received recently from HFM are slightly different: Found c1873 by Mr Smith, Grantown, under a granite boulder in Kincardine, Abernethy. There was a local tradition that Colonel John Roy Stewart hid arms and flags there and the finder stated that there were remains of silk cords attached to the loop of the axe-head and believed that it was a relic attached to Colonel Stewart's flagstaff. Donated by the Executors of the late Miss Peace, Grantown-on-spey. Kingussie acc no: KIGHF: DG 1 (N 4).
Information from Mr T Cowie (NMS) 27 November 1994 <4>

The dirk was previously described twice in the Highland HER. <6>

This group was catalogued and photographed as part of the North Kessock & District Local History Society and Archaeology for Communities in the Highlands (ARCH) collaborative 'Feats of Clay' Project, which was focused on Bronze Age metalworking around the Moray Firth. The dirk was assigned a Middle Bronze Age date and the two socketed axeheads Late Bronze Age dates. <7>