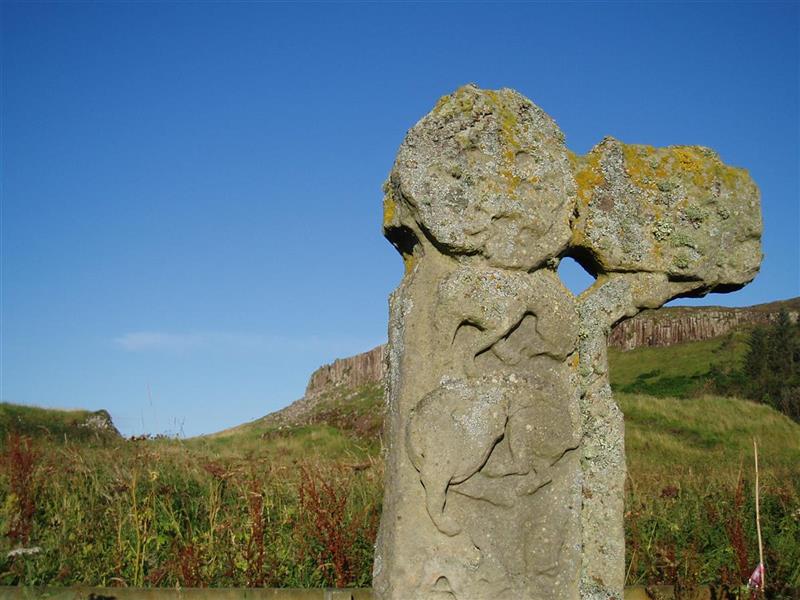 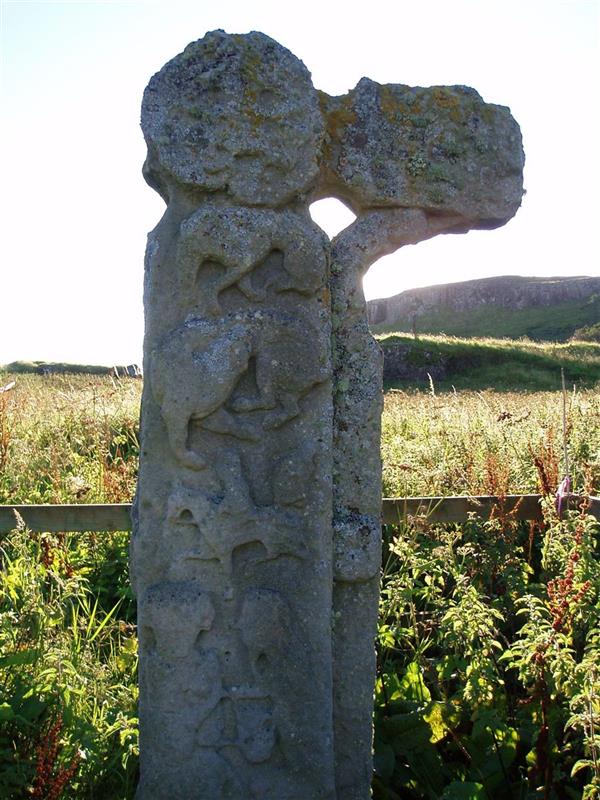 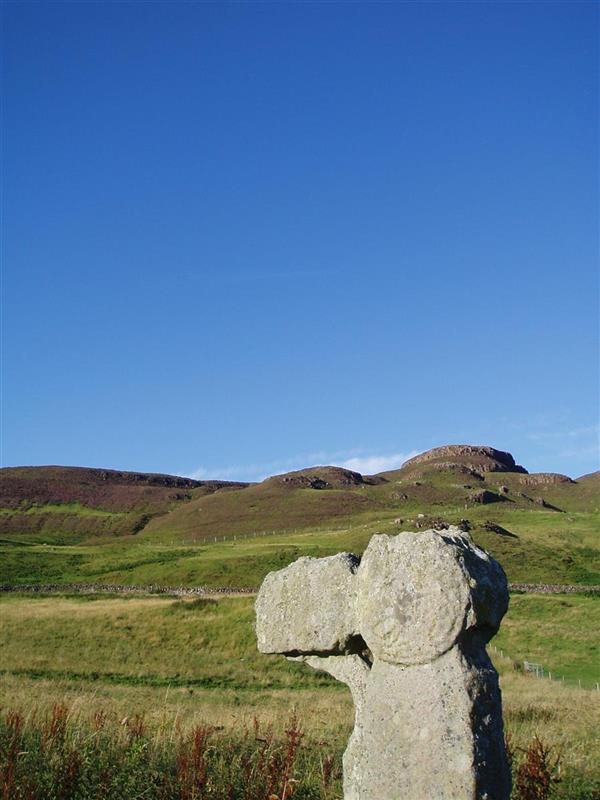 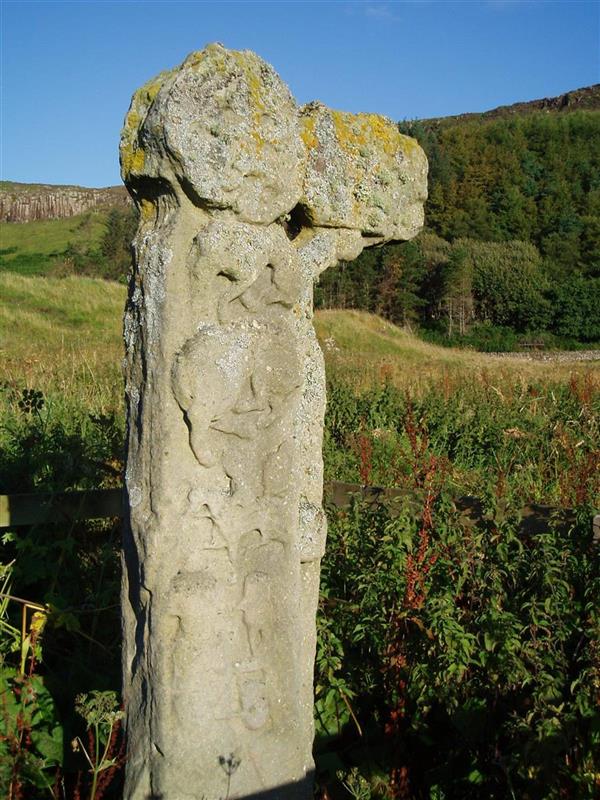 A free-standing cross of yellow sandstone situated in the old burial ground of St Columba's Church, Canna. It is c. 6 1/2' in height with one limb of the cross only remaining.
J Stuart 1867; RCAHMS 1928, visited 1925.

This cross (as described and illustrated by RCAHMS) still stands within the site of the old burial ground.
Visited by OS (A A) 12 January 1972.

Cross, A'Chill. Worn shaft and one arm of a cross, perhaps of the 8th or 9th centuries, the W face carved with intertwined figures and a panel of key pattern, the E more robustly with figures including animals, a horseman and perhaps the Holy Family.
J Gifford 1992.

NG 2695 0553 The replacement of the post-and-rail fence around the Early Christian sculptured cross (NG20NE 2) required a watching brief to comply with Scheduled Monument Consent. The fence posts were driven into the same holes as those that had been created for the removed fence. No features of archaeological interest were recorded during this work.
Archive to be deposited in the NMRS.
Sponsor: NTS.
J Harden 2002.

A’ Chill 12 (St Columba), Canna, Skye & Lochalsh, cross and cross-base
Measurements: cross H 2.11m above base, W at base of shaft 0.54m, D 0.26m; base 0.98m by 0.81m, socket 0.55m by 0.28m.
Stone type: yellow sandstone
Place of discovery: NG 2695 0553
Present location: in a field at A’ Chill.
Evidence for discovery: first recorded in the mid nineteenth century, when traces were still visible close by of the early medieval church and graveyard. The cross is oriented with its broad faces east and west. Two fragments of the upper sections of the ring were found in the neighbouring field.
Present condition: very weathered, and the upper and south arms are missing, as is most of the south face of the shaft (face D). The original span of the cross-head would have been about 1.35m.
Description:
This was once an imposing and elaborately decorated ringed cross, set in a solid base which is enclosed by a kerb of low upright slabs. The ornament includes figural, zoomorphic and interlace designs, carved in relief, and it appears that all faces of the cross were ornamented. The shaft is carved in two levels of relief, a central higher panel and a lower flange on either side, giving an impression of the treatment of a cross-slab to this free-standing cross. The central panel on face A is in higher relief than that on face C.
The east face (A) shows vestiges of entwined animal ornament on the surviving side-arm and central roundel of the cross-head, and the motifs on the central panel of the shaft are presented in one continuous field. At the top, immediately beneath the central roundel is a two-legged animal above a supine quadruped. Below them is a rider on a horse trotting to the left, with a possible signifier motif above the horse’s rump. Below the horse are two much larger figures: on the left a seated woman and child and on the right a kneeling bearded man with very long hair, offering objects towards the child. At the foot of the shaft are two supine animals, a deer above a dog-like animal. The flange on the right-hand side is carved mostly with interlace patterns, but at the top the ring-section bears an elongated robed figure apparently supporting the right-hand arm.
The north narrow face (B) bears the rounded figure supporting the arm at the top, with two smaller figures below, one above the other and both frontal. There is interlace ornament on the end of the surviving arm.
On the west face (C), the top of the shaft is carved to represent the lower arm of an equal-armed cross, and it contains diagonal key pattern. The side-arm appears also to have been filled with interlace, as is the central roundel where there are four scroll-like designs. All the elements of this face are framed by narrow roll mouldings. The lower part of the shaft is divided into four panels, the top three of which contain entwined elongated animals and interlace. The lowest panel is carved with confronted S-dragons guarding a central human figure. The flange bears interlace ornament.
Date range: eighth or ninth century.
Primary references: Stuart 1867, pls 50-1; ECMS pt 3, 107-9; Fisher 2001, 96-7.
Compiled by A Ritchie 2016 <2>