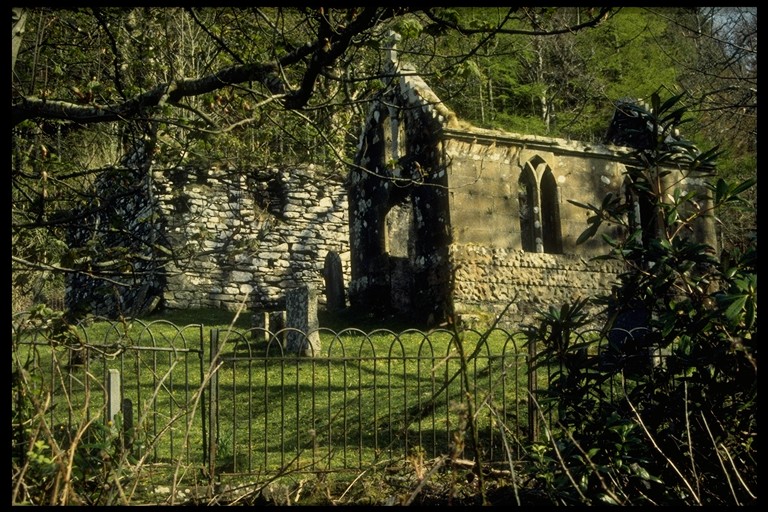 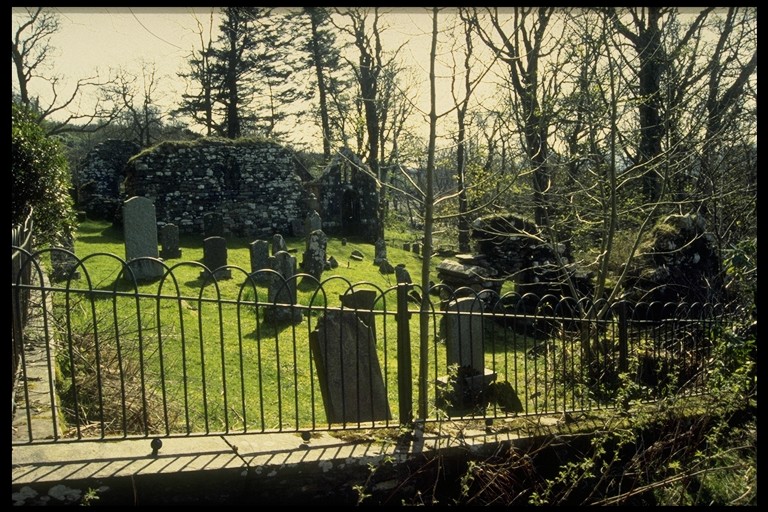 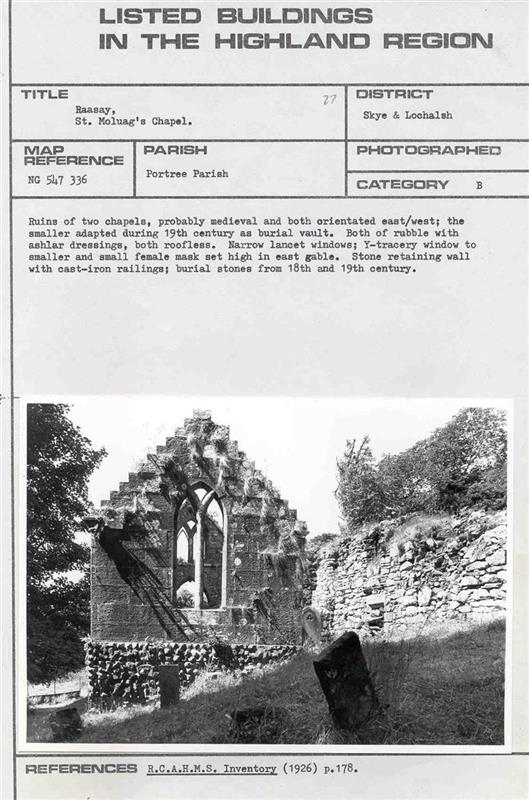 St. Maol-luag's Chapel, Raasay, a church dependent on Lismore in Loan, the central community of St. Moluag, (A B Scott 1918) is described by Johnson as a chapel unroofed and ruinous. Its precincts were of old a sanctuary, which was marked by 8 erect stones or crosses mentioned by Martin as pyramids for deceased ladies, (NG53NW 4) some of which were remaining in 1773 (OPS 1854; M Martin 1934). The ruins of the 13th century chapel (D MacGibbon and T Ross 1896-7) are situated within a small burial ground. Both gables and the larger portion of the S wall remain to their original height, but the N wall is now considerably broken down. There are a number of interesting features, details of which are obscured by obvious changes of ground level both internally and externally. The chapel is roofless, orientated NW-SE, and measures externally 52ft long, 24 1/2ft wide at the NW gable and 2ft at the SE gable. The walls are 3ft thick and there is evidence, especially in the S wall, of structual alterations at different periods. The original door was placed 16 1/2ft from the W end of the S wall, but it appears to have been built up and substituted by another doorway, traces of which can still be detected in the dilapidated N wall. There are windows in the E end of the W wall and N Wall, and the W gable. The W gable is intaken 10ins - 1ft at 10 1/2ft above the present interior level, and remaining joist-holes indicate that there was a gallery at this end. Similar joist-holes in the N and S walls near the E gable possibly indicate provision for a screen. There is a tomb recess in the S wall. There is a decorated cross-slab in the burial ground. (W D Simpson 1935).
D MacGibbon and T Ross 1896-7; Orig Paroch Scot 1854; A B Scott 1918; RCAHMS 1928; M Martin 1934; W D Simpson 1935.

St. Maol-luag's Chapel as described above. On the S side of the chapel is a small detached 19th century family burial vault of the Macleods of Raasay. The burial ground is still used for the descendants of those interred there.
Visited by OS (A S P) 12 June 1961.

The ruined medieval chapel was scheduled in 1967.

The decorated cross-slab mentioned by RCAHMS could not be found, otherwise no change.
Visited by OS (R L) 22 September 1971.

The ruined chapel and its surrounding graveyard were listed at Category B in 1982.

Class I symbol stone showing a tuning-fork above a crescent and V-rod.
A.Mack 1997.

The chapel and its surrounding graveyard (including funerary monuments and structures) were surveyed by members of ACFA in 2005 as part of their ongoing survey of archaeological and historic monuments on Raasay. The survey included included the production of measured plans and photographs. <1> <2>

The chapel ruin was removed from the listing in August 2015 as part of a project looking at dual designations of sites in the Highlands, though it remains a scheduled monument. The statutory address was formerly 'Raasay St Moluag's Chapel'. <3>