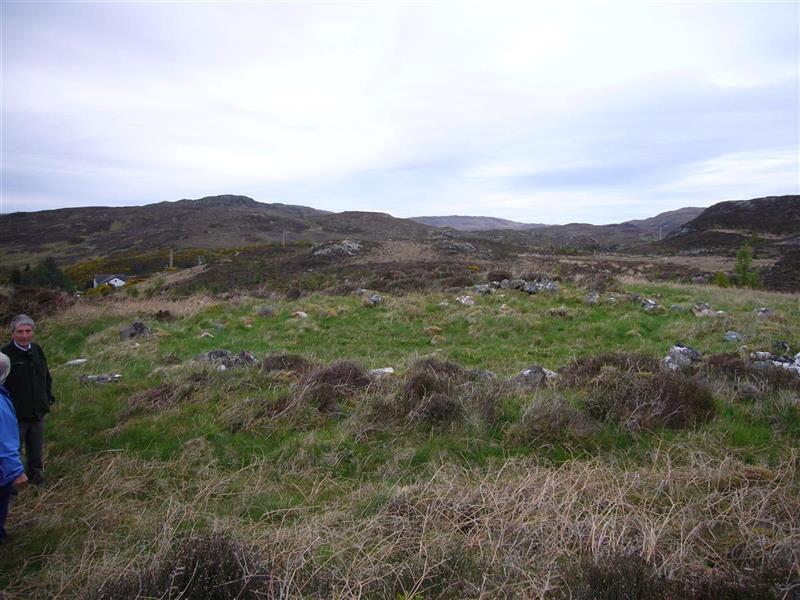 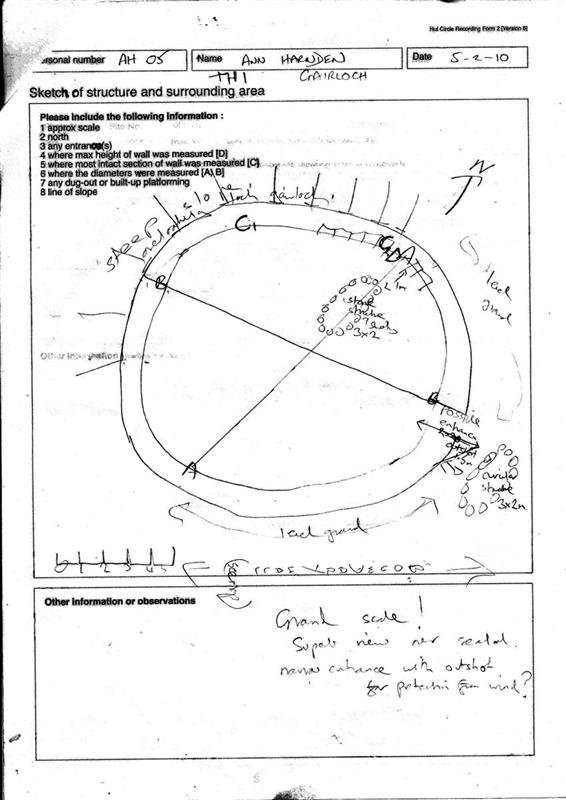 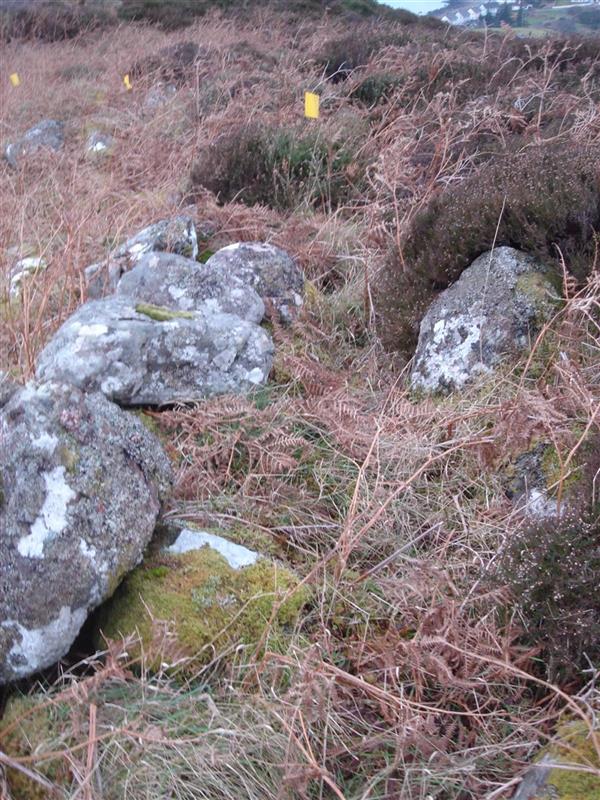 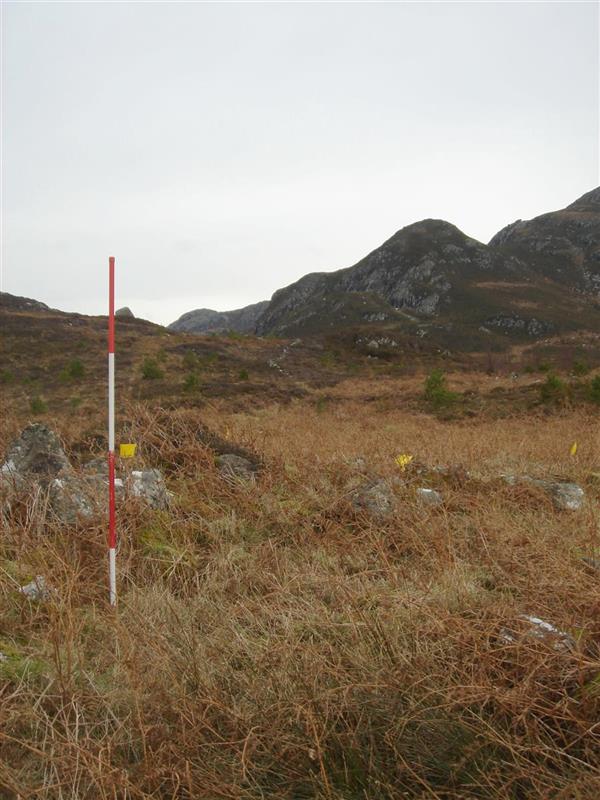 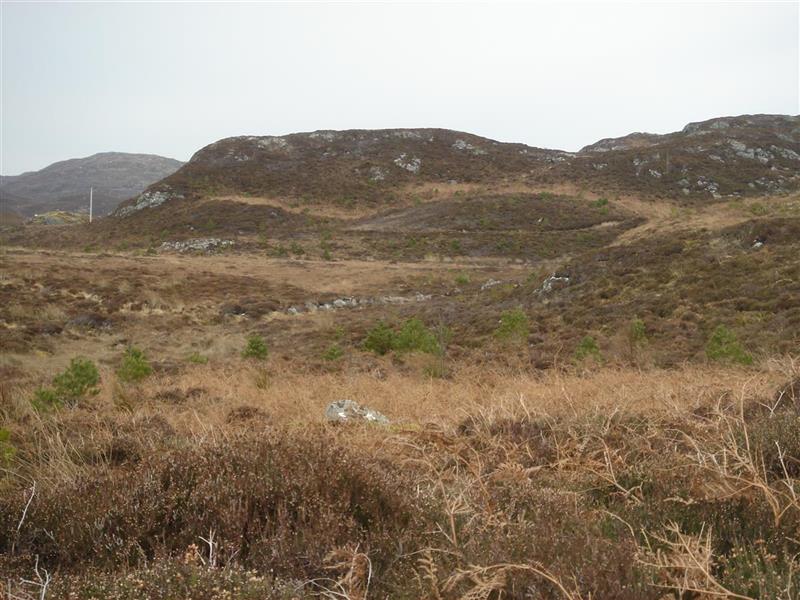 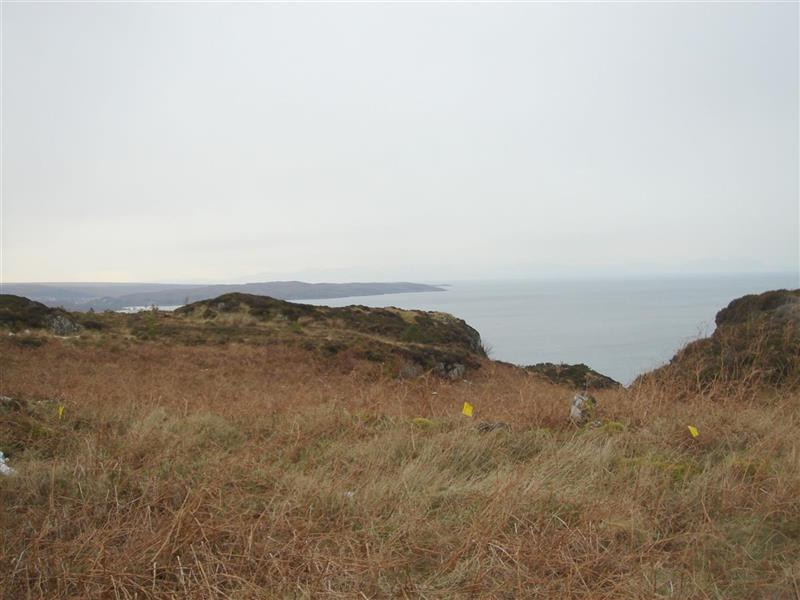 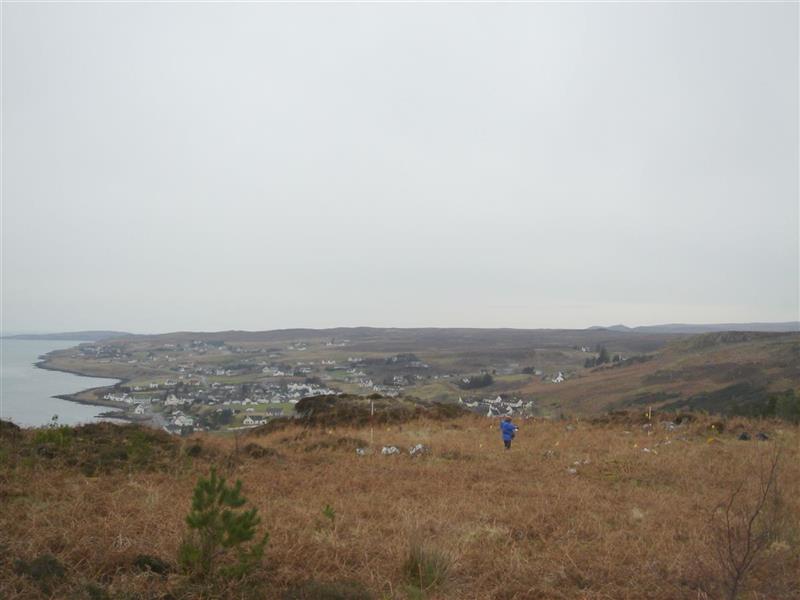 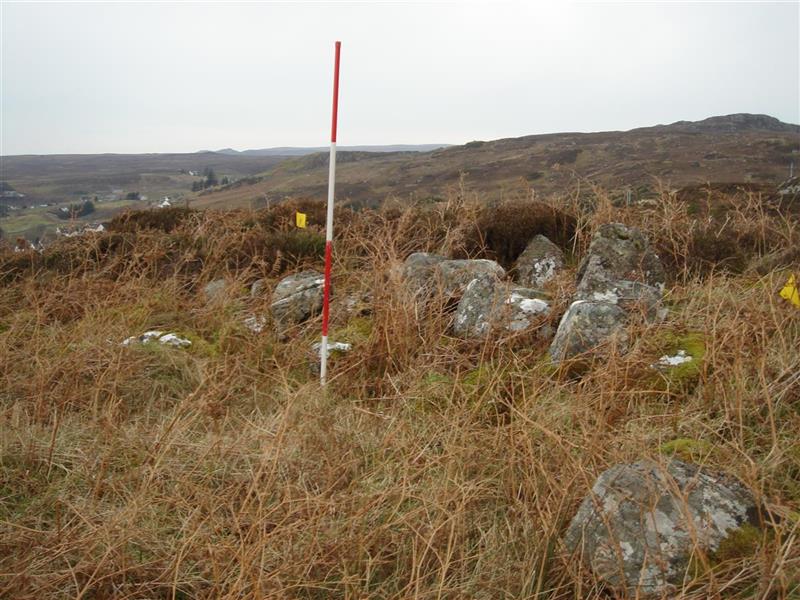 At an elevation of about 85m near the top of Torr na h-Ulaidh beside a small rock face and 25m northwest of of a low stone dyke running along the hilltop, is a hut-circle. It is quite large, ca. 12m diameter, with the walling of stone. The doorway is apparently at 240⁰ grid. The ambient vegetation is bracken, moss and grass inside the circle; the same plus heather outside. There are also the remains of two small oval buildings, ca 2m x 1m one inside and the other adjacent to the circle. Not shown on the OS maps. <1>

One of a number of hut circles in the area, dug into the slope and with a panormaic view. Internal diameter 12 m; outer diameter 17.8 m. Detailed record made by Anne Harnden 5-2-10 as part of Anna Welti's hut circle database recording project. Grid reference is taken from Anne Harnden's recording sheet. <2>

180605 877136 Torr Na H-Ulaildhe 1 (Auchtercairn R8) AH005: The hut circle was visited by A Welti, A MacInnes and A Harnden in 2010 as part of research for a dissertation on hut circles in Wester Ross. This was part of a degree course overseen by Aberdeen University. This HC is one of 10 circular stone structures in the Auchtercairn area above and to the east of Gairloch. AH005 is built on a massive scale. It is sited on a level platform with superb panoramic views out to the west over the sea. There are enclosures and field boundaries in the immediate area. The platform is dug into and built out from a gentle north west facing slope. It is 100m from a stream, and 500m upslope from the sea loch, Loch Gairloch. The surrounding landscape is covered mainly with bracken, as well as some heather, some grass, and some young trees. Inside the structure there was initially a mixture of bracken, heather and grass. The bracken was taken down before the excavation, giving a clearer picture of the structure of the walling. Facing stones were large and infill was of slightly smaller stones (see photo). Average internal diameter is 12.0m, external diameter is 17.0m. The double skinned wall is 2.0m thick with maximum height 1.0m. The definite entrance faces southwest with internal width 1.5m, passage length 2.0m. External width and any extension to the entrance passage could not be distinguished from tumble and stone slippage downslope. A rectangular shieling hut, 4m x 5m, has been built inside the northeastern arc and a smaller circular stone structure adjoins the outside of the eastern arc. AH005 is 75m from AH006 (see MHG) and 50m. It may be associated with these, as well as with the other 7 HCs in the Auchtercairn area. <3> <4>

This HC was chosen as one of the sites for a Wedigs excavation in 2012. Four trenches (which included two soil sampling pits outside the structure - trenches 3 and 4) were excavated as part of the project. Trench 1 was excavated in the centre of the hut circle and yielded evidence of intense fire. Trench 2, excavated across the wall of the stucture, revealed the monumental well-built base of a 2m thick wall. There was no trace of an occupation horizon. Charcoal from two hearths in the central trench gave dates of 254BC and 213BC, Middle Iron Age. <6>

Environmental and finds analysis were carried out by AOC Archaeology Group. <7>

Pollen Analysis was carried out by S Timpany of ORCA Marine. <8>

Multi-element analysis of soil samples taken across the site of this hut circle was carried out by S Curran of the University of Stirling. <9>

Additional soil analysis of samples taken from outside this hut circle was carried out A Welti. <10>

Radio-carbon dating of samples from this hut circle was carried out by SUERC. <11>

A shorter published summary of the WeDigs project, including the archaeological trenching at this hut circle was also produced. <12>