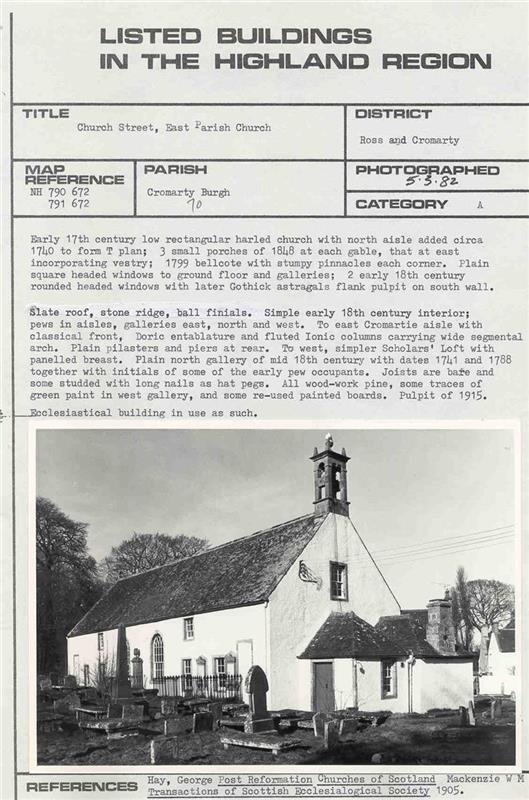 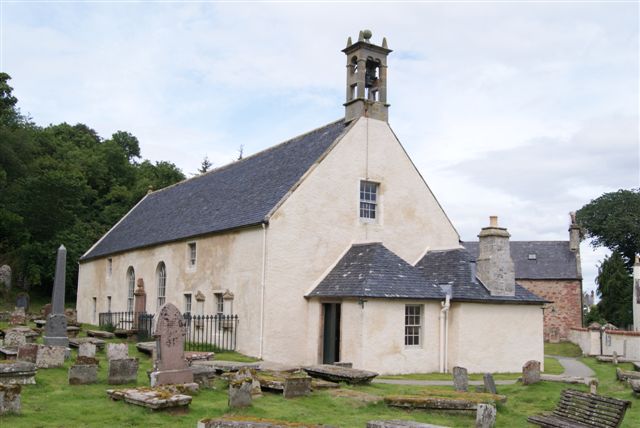 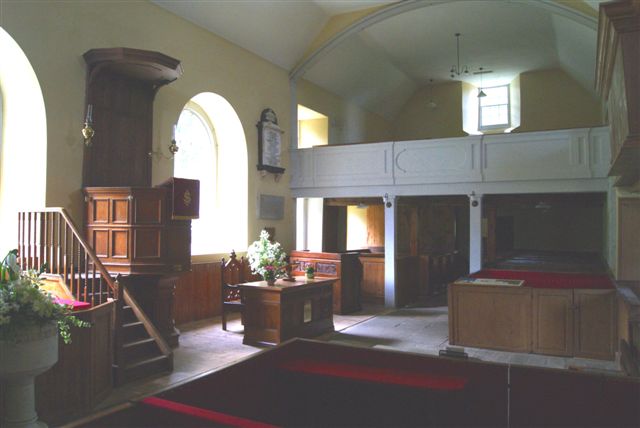 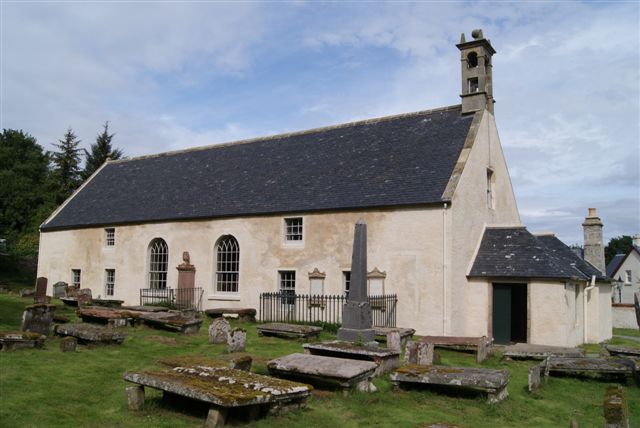 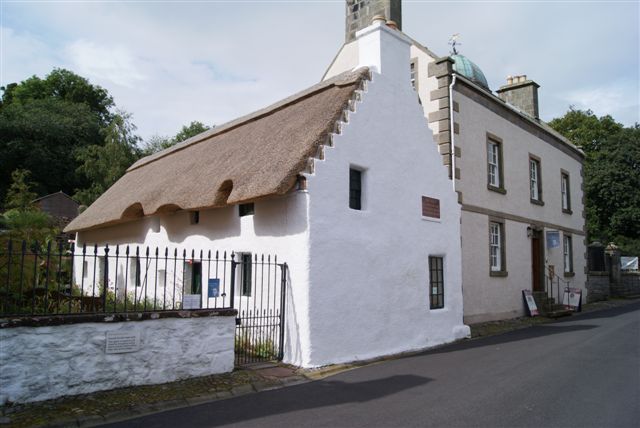 Cromarty Parish Church is as described by previous authorities.
Visited by OS (N K B) 28 January 1966.

Brief description of church with photograph. <5>

Evaluation trenching was carried out in the churchyard and close to the walls of the Church in 2007. These trenches revealed fairly substantial modern drains running along the exterior of the church walls, which appeared to flow away from the building into a combined sewer. <6>

A programme of archaeological survey, photographic recording, trial trenching and observation of groundworks was carried out by Highland Archaeology Services Ltd from 2008 to 2009 on behalf of the Scottish Redundant Churches Trust (SRCT) during repair and conservation works.
Contra <1>-<3>, no evidence of a date of 1593 could be found on the church. This is potentially a reference to the former church (see MHG8778).
Cromarty East Church is a Presbyterian T-plan building, but with the main body of the building lying east-west. A north aisle was added in 1739-40. There is also an aumbry in the north wall, and a fine late 14th or 15th c. gravestone was discovered inside the church in the late 1970s and placed in the west porch. Archaeological work in the 1990s at Portmahomack and Edderton demonstrated clearly that both these succeeded earlier churches on the same site, and that much medieval fabric survived in their walls, hidden by later harling. In these cases, as at Cromarty, burials were found within the church itself – a practice which ceased at the Reformation. The present archaeological work also found charnel pits containing skulls just inside the west door of the church, but where these remains came from is not known.
The pre-Reformation church appears to have consisted of a simple rectangle. There was no indication of any side chapels, chantries or tombs. Fragmented areas of paving suggest that the floor may have been flagged. However burial within the church must have led to constant subsidence and a need for continual maintenance. The 14th c. gravestone, moved to the west porch in the late 1970s, may well have been a feature of this early church.
After the Reformation of 1560, it is not clear when the altar was removed and a pulpit set up. Throughout the 17th c. there was a strong Episcopalian party in Cromarty including the laird, Sir Thomas Urquhart; and there were several Episcopalian ministers. Whether this affected the form of worship at all, or simply the church’s organisation, is not entirely clear. Whenever the church was rearranged for a service based on preaching it seems possible that the altar kerb at least may have continued to be part of the visible floor for some years after 1560. Certainly the erosion of its surface must have taken many years to achieve, and it seems reasonable to assume that the stone had a life as a grave-marker before its re-use.
Although little seems to have changed in the church fabric in the late 16th or early 17th c., the walls may have been substantially refashioned at some point. When the church roof was renewed in 1756, the old timbers were described as ‘140 years old’. Perhaps there was a major rebuilding in the early 17th c. Certainly, the wall fabric as a whole shows little evidence of alterations or rebuilds before the 18th c. Apart from the 16th c. east window, blocked late medieval window openings were not found when the harling was removed as might have been expected, although, a 16th c. lintel had been re-used in the south wall.
In the later 17th c. the fabric of the building seems to have been largely unchanged but the session minutes reveal the construction of pews by wealthier local families. It is not known when lofts were first constructed but a scholars’ loft was in existence by 1680, for children attending the parish school. This was one of several lofts built in the west end of the kirk, with those in front built lower than those behind. In 1716-17, a new loft was constructed whose front in now under the front seat of the west loft. This stretched across the width of the church and replaced an earlier common loft, the scholars loft and one or more small private lofts. An ‘Eastern Gallery’ is mentioned in 1756.
Hugh Anderson was the first minister to be chosen by the congregation in 1655, taking over from his father. Despite being deposed after the Restoration he returned to the ministry in 1690 and continued until his death in 1704. He was buried in a tomb built onto the church’s east end. By the 1730s there was a need for more accommodation. The North Aisle was built in 1739-40, and this probably coincided with the blocking of the old doorway and its replacement with a new entrance in the NE corner. An external staircase was provide to access the new poor’s loft, so named as the proceeds from renting pews were devoted to poor relief. In 1760, Richard Pockocke reported the discovery of ‘an old font and some stones of the old church’, ‘found lately on pulling down a wall. This probably refers to the removal of part of the south wall in 1739 to build the North Aisle. What became of these items is not known. In 1756, major works were carried out, including re-roofing as the slates used in 1740 on the north aisle had proved defective. The walls were raised by 4 feet (1.22m). The scholars’ loft was replaced by a new Laird’s Loft, and the west loft was renewed by the leading merchants. New doors and steps were constructed to access these lofts from outside the building, and new windows were provided in the south wall to light the pulpit. These windows were enlarged in 1799. At the same time, new entrances were created in the three gables, the North Aisle roof was raised, and the external stairs and door to its loft were replaced by an internal staircase. A belfry was added to the east end.
After the Disruption of 1843, a Free Church of Scotland congregation was established in Cromarty. This built a new church at the west end of the town (The West Church). However in 1929 the Church of Scotland and Free Church reunited. For many years both churches were used, but by the 1990s it was no longer possible to maintain two churches with the resources available and the West Church was designated as the parish church. <7>

Restoration work has been completed and the church is now open to the public once again. Photographs were submitted to the HER by Andrew Taylor in August 2011. <8>