A township comprising the remains of nine buildings, two enclosures and other features. The settlement is most likely earlier than the neighbouring western settlement. If the other settlement was indeed a distillery, as suggested by local tradition, then the workers may have lived here. One of the buildings in this eastern township has also been identified as a possible still house. 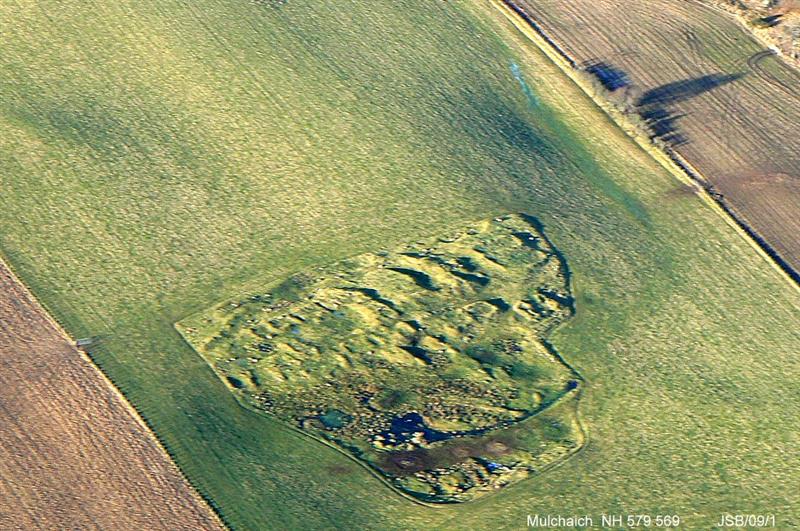 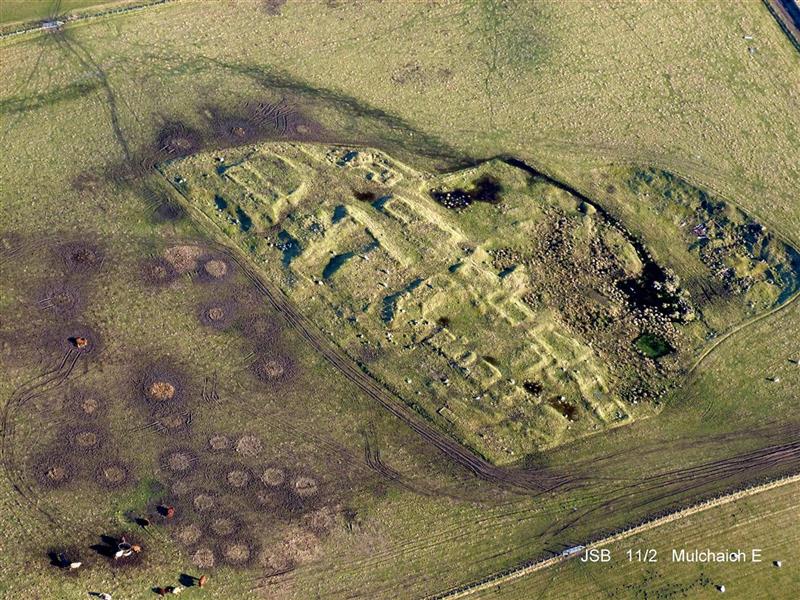 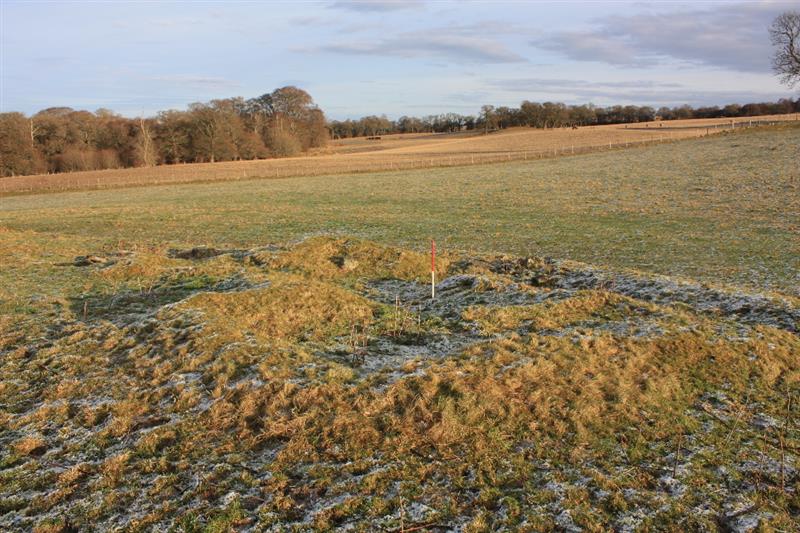 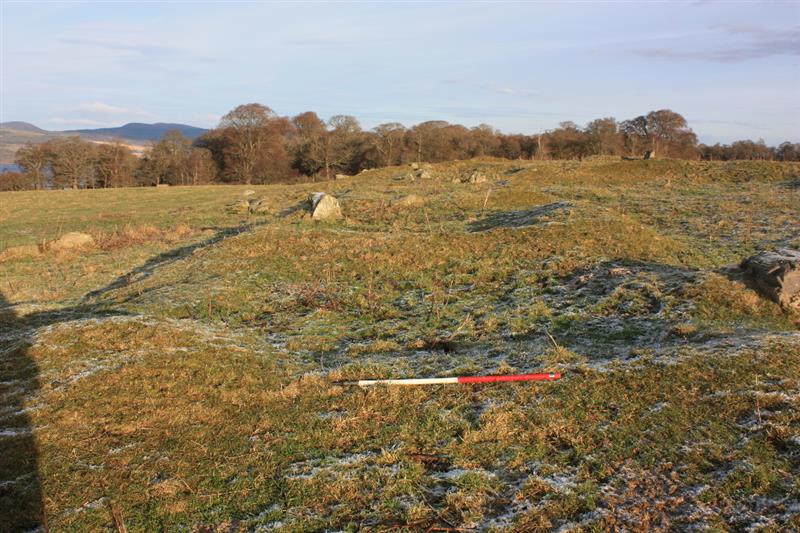 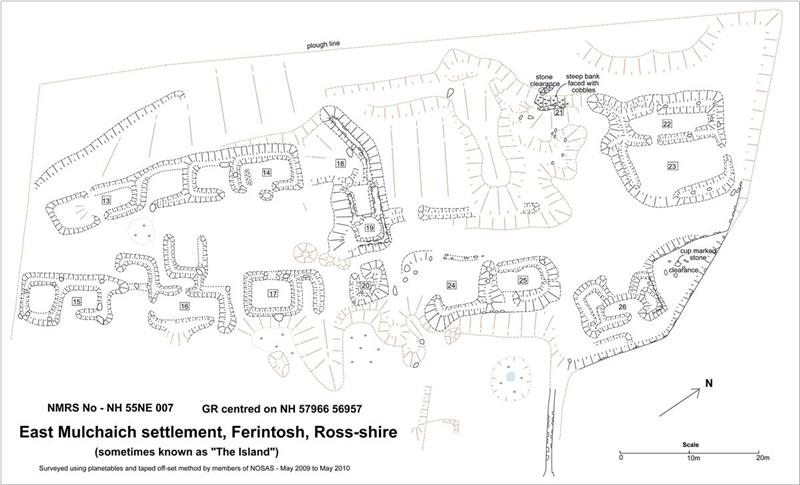 Some six turf-covered footings survive in a reasonable condition on a small stony eminence in an arable field, and there are two or three others mutilated by quarrying. The wall footings are spread to 1.0 m and 0.3 m high.
Surveyed at 1:2500.
Visited by OS (J B) 27 Feburary 1981.

GR corrected to scheduled area above. No buildings marked on 1st ed OS - just an area of trough grazing that approximates to SAM - HAW 03/2005

Impressive aerial images of this site have been submitted to the HER by Jim Bone. <2>

This site was surveyed by the North of Scotland Archaeological Society in March and July 2009 and May 2010. The settlement is most likely earlier than the neighbouring western settlement. If the other settlement was indeed a distillery, as suggested by local tradition, then the workers may have lived here. One of the buildings in this eastern township (site 26) has also been identified as a possible still house. The survey report gazetteer entry for this township is as follows:

"This township is located 400m to the NE of Mulchaich Farm in intensively farmed land. It is on a NW facing slope above the Cromarty Firth and has extensive views towards the town of Dingwall and Ben Wyvis. The site is in the middle of a field on an elongated flat knoll and does not appear to have been ploughed. It is grazed by cattle or sheep but in the summer is overgrown with dockens and thistles. An area of marsh to the SE has what may be a spring within it, although this may be the outflow of a field drain. The water runs in a ditch down the east side of the site before entering a further field drain.

The site covers an area of 100m x 50m. The remains of nine buildings, two enclosures and several other features are apparent as earth or earth and stone banks, which are 0.3m to 0.5m in height with a spread of between 1 and 1.5m. Some of the buildings have distinct stone edges to their footings, others have substantial earth underbuild on their lower sides. Many of the buildings have multiple compartments.

Buildings 13 and 14 and buildings 15, 16 and 17 in the SW part of the site form two parallel ranges, which stretch for a length of approximately 50m and enclose an elongated quadrangle, with building 19, set at right angles in the central part of the site, forming the north limit. Building 19 has more stone composition in its wall footings and has two compartments, with a stone slab set on edge between them. To the east there is an earthen square structure, 20, and to the west a platform, 18, which is enclosed by a stone and turf bank on its north side, this is open to the west where the ground slopes away abruptly.

The north part of the site has two single compartment buildings, both with enclosures, 22-23 and 24-25. A complex building, 26, occupies the NE corner of the site. The main part of this building is just 6m x 2.5m internally and there are two outshots, with communicating openings into the main compartment, abutting each of the west most corners; both are at a higher level by some 0.3m; the south most also has an entrance to the outside in the south.

On the NW side of the site there is a complex series of terraces with, in one part, a steep bank, 21, which is faced with cobbles; this is 5m in length x 1m in height.

Two areas of quarrying are seen as deep indentations into the side of the knoll, one into the NW side and the other, a smaller one, into the SE side. An earth and stone bank which has been truncated by the NW quarry may have defined an enclosure." <3><4>

Full background information and analysis can be found in the survey report, linked to this record. A cup marked stone was also recorded on this site - see MHG55077. <5>