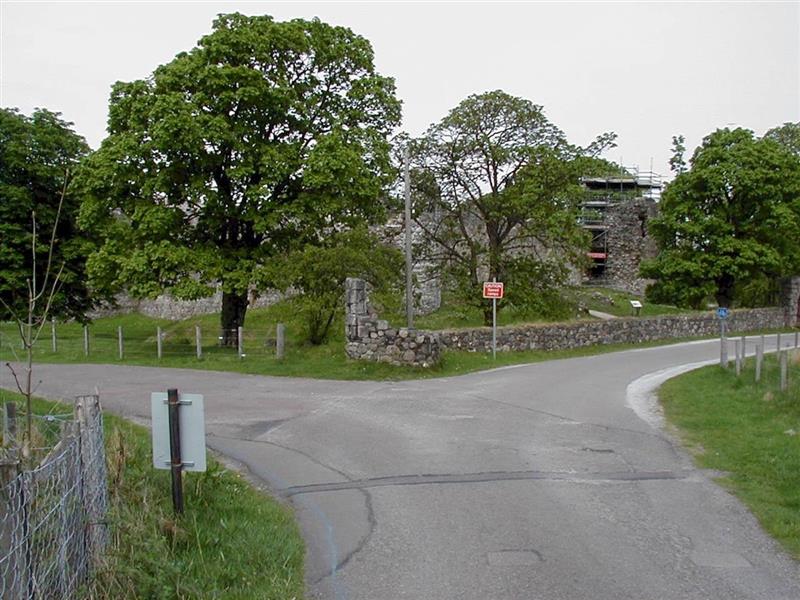 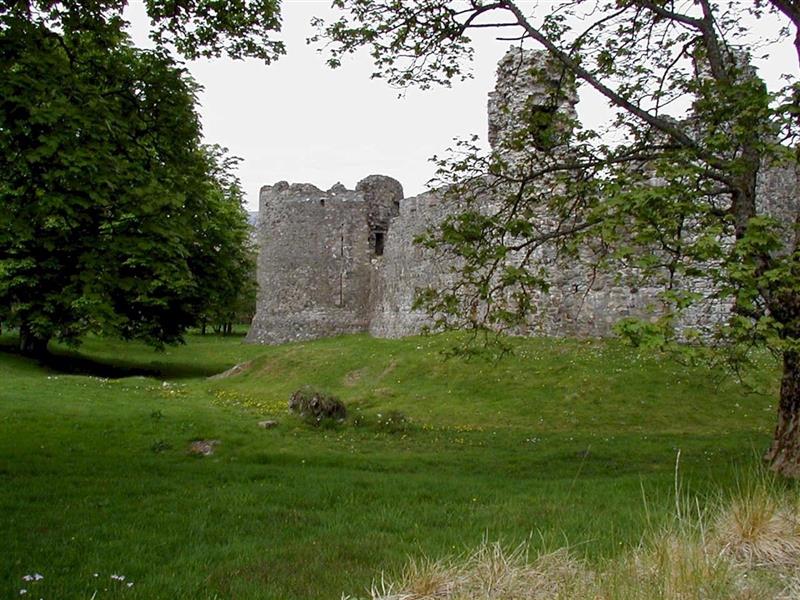 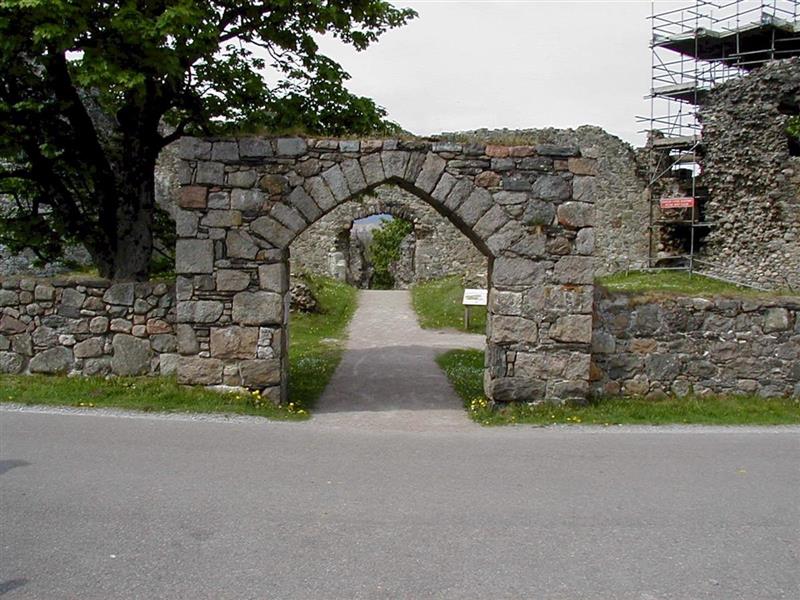 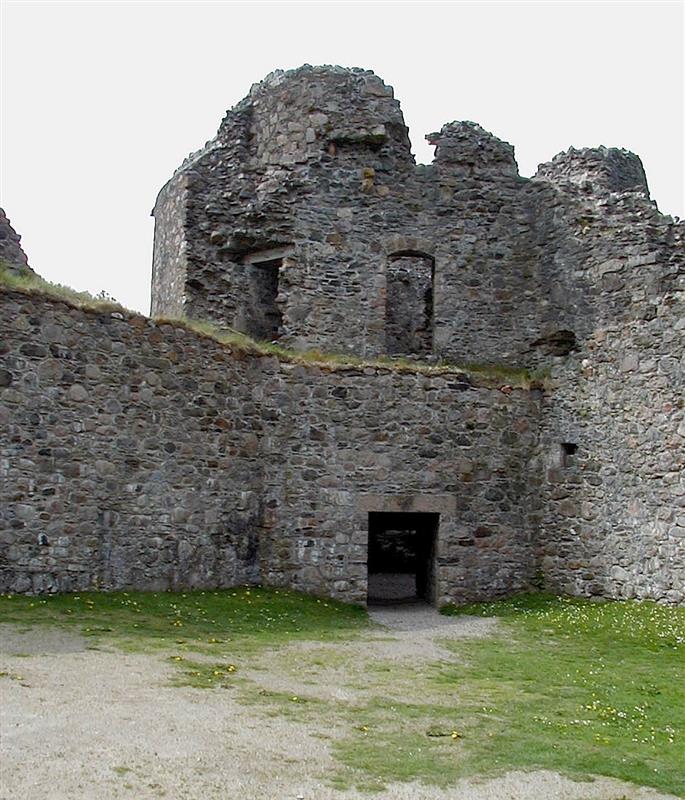 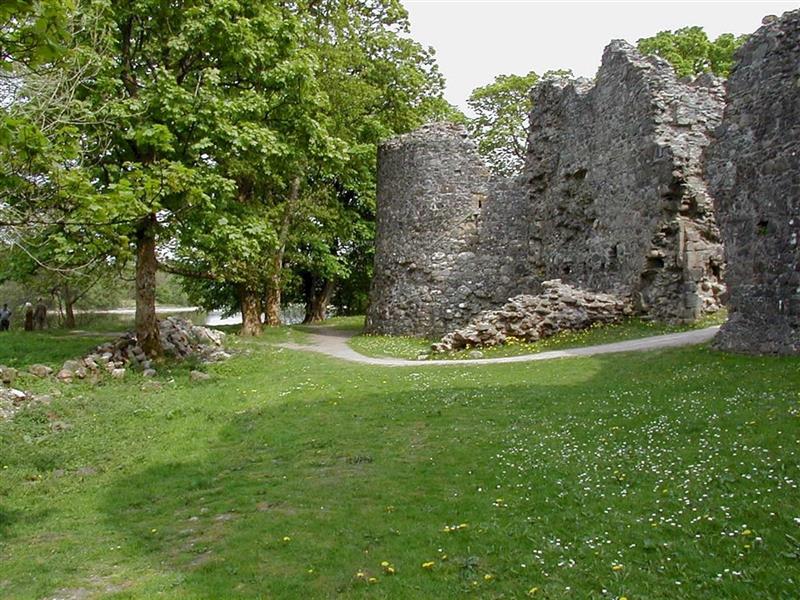 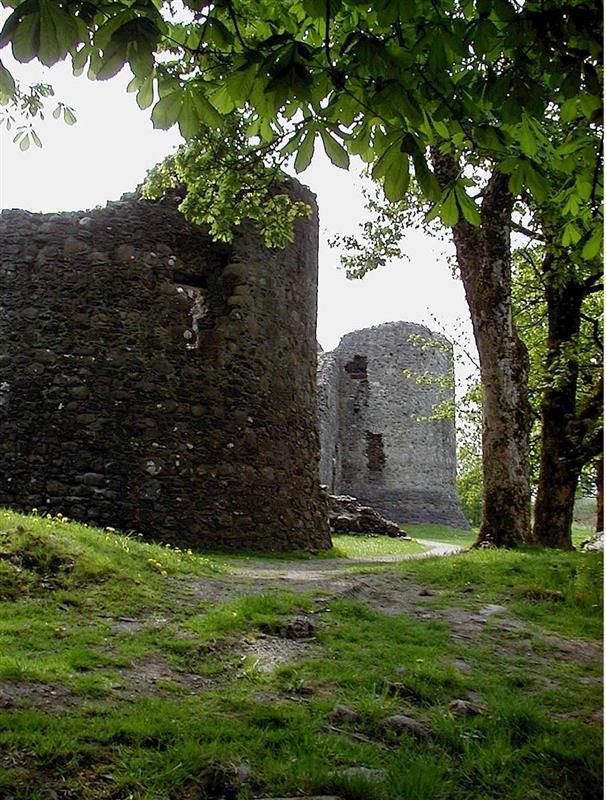 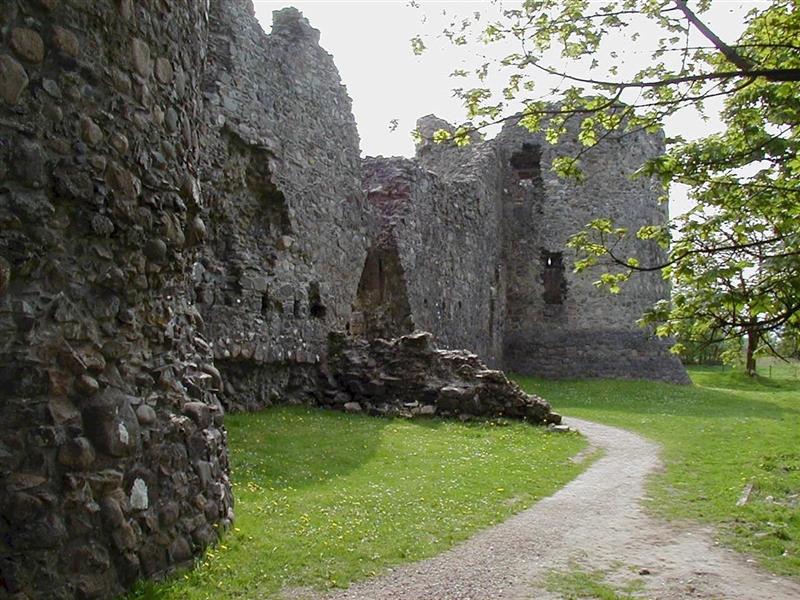 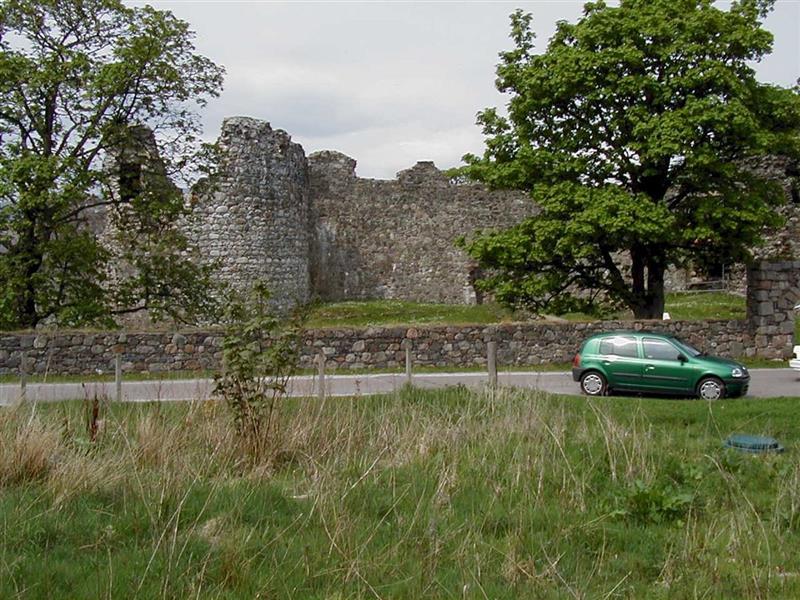 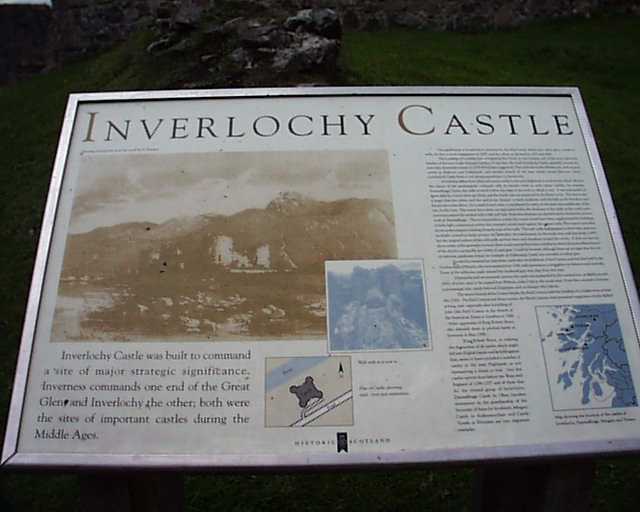 Photo of interpretative board © The Highland Council 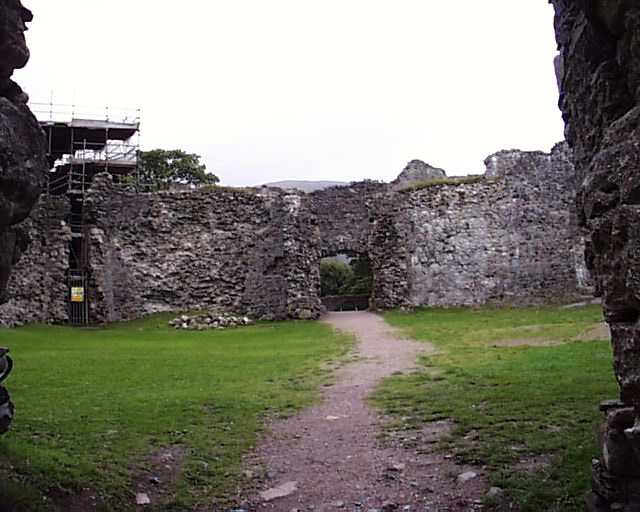 Photo of interior © The Highland Council 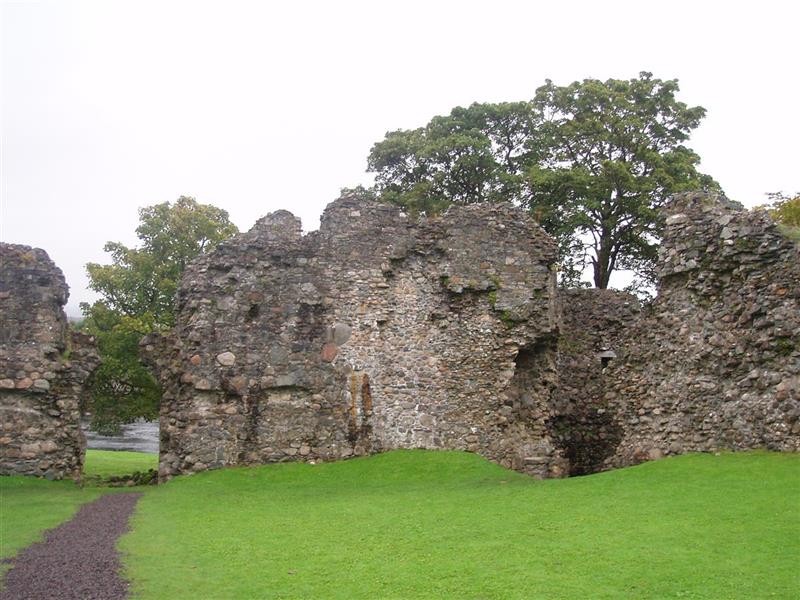 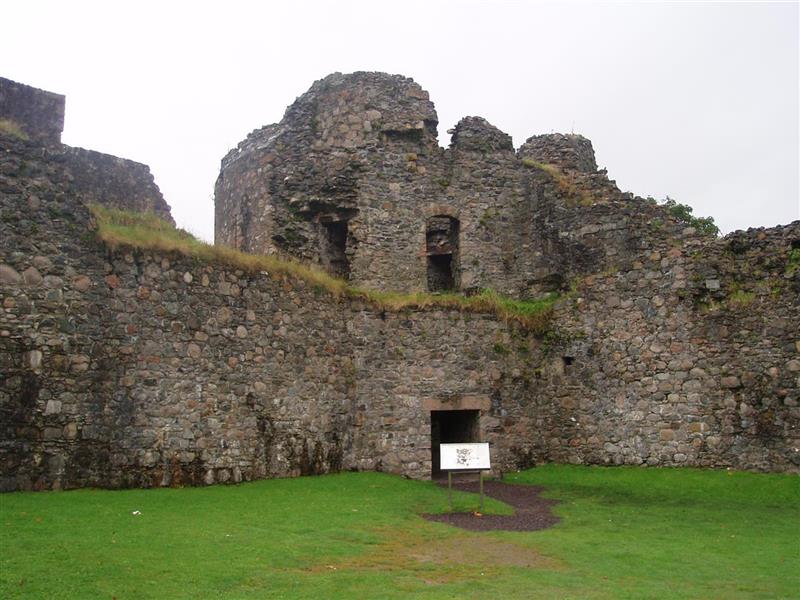 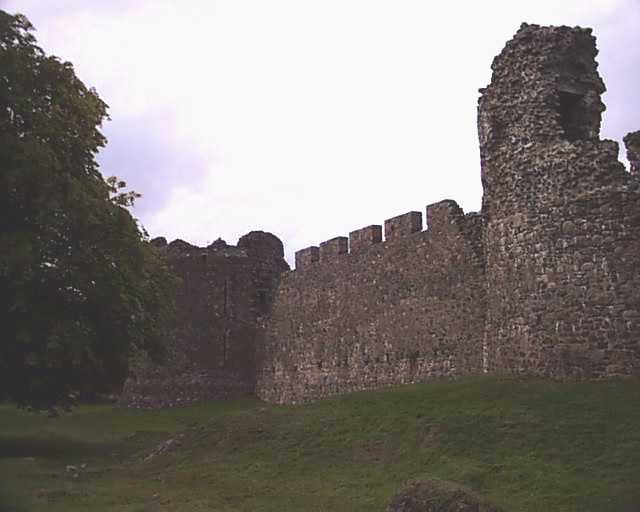 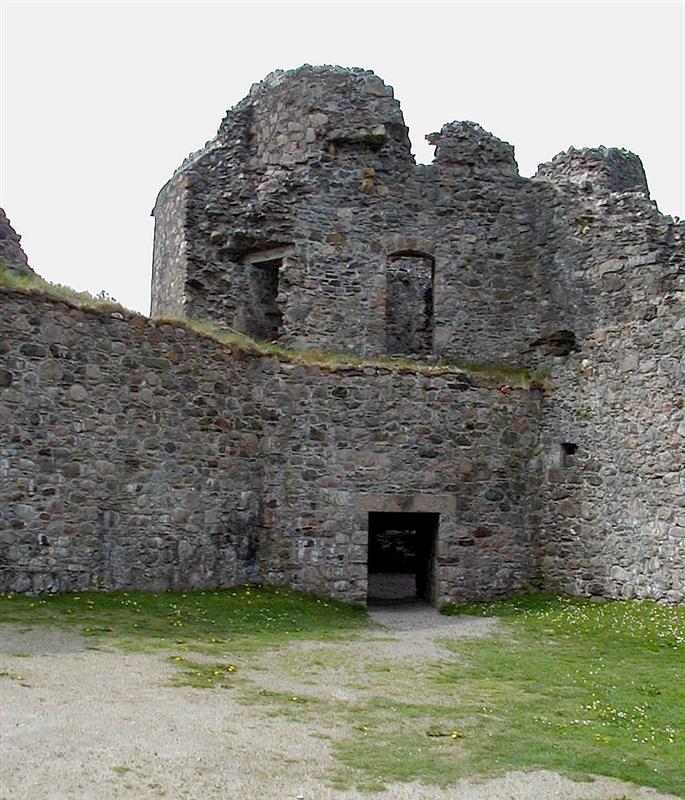 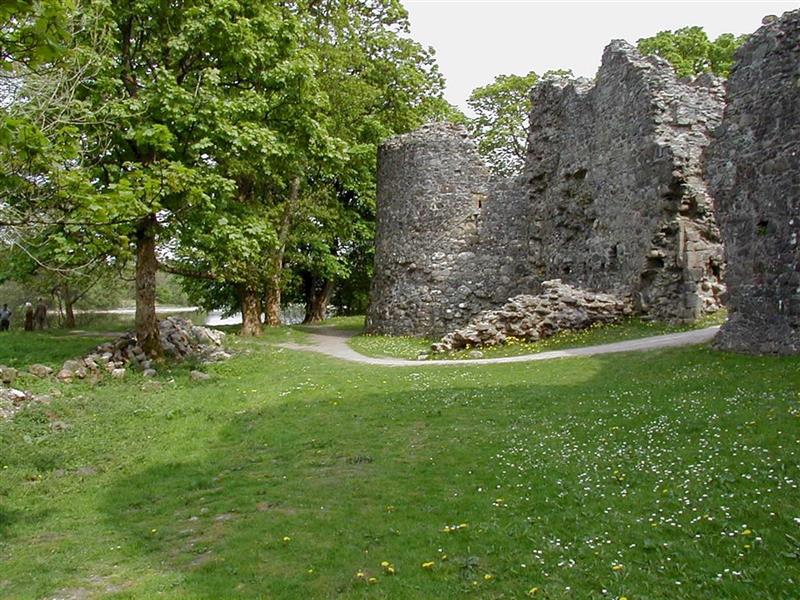 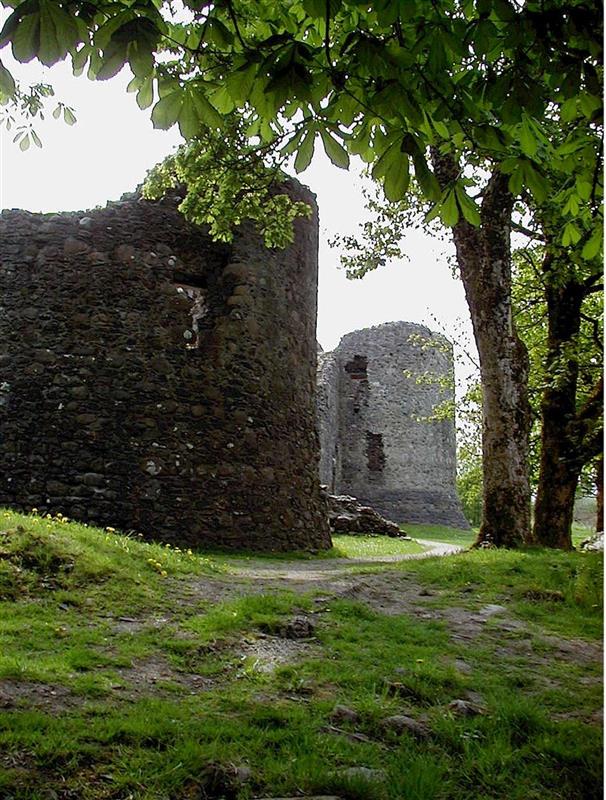 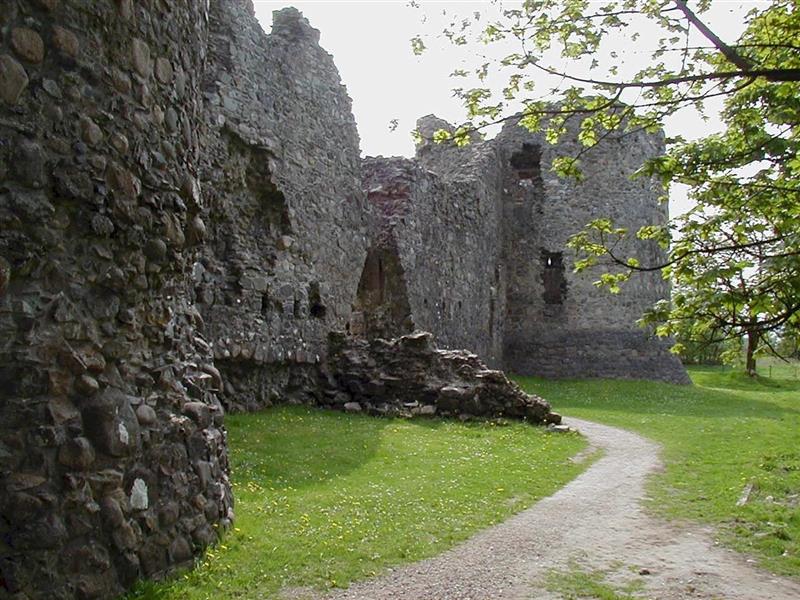 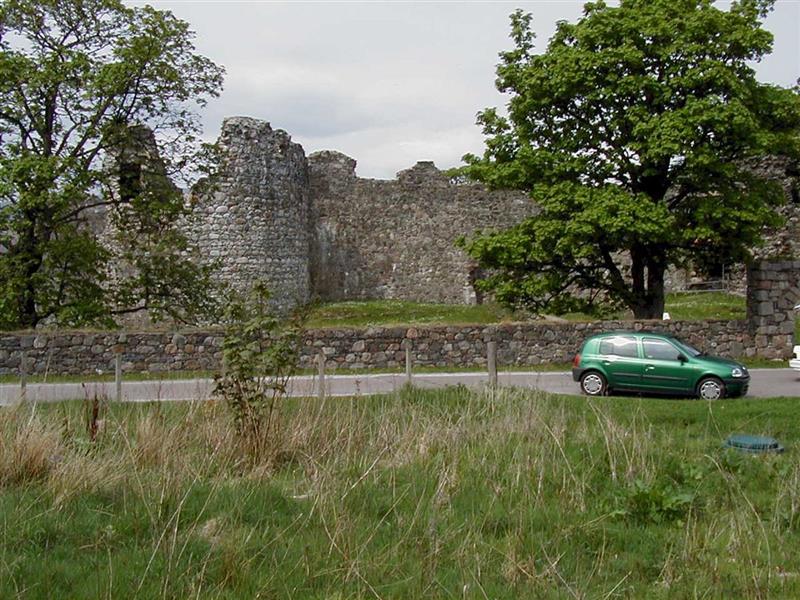 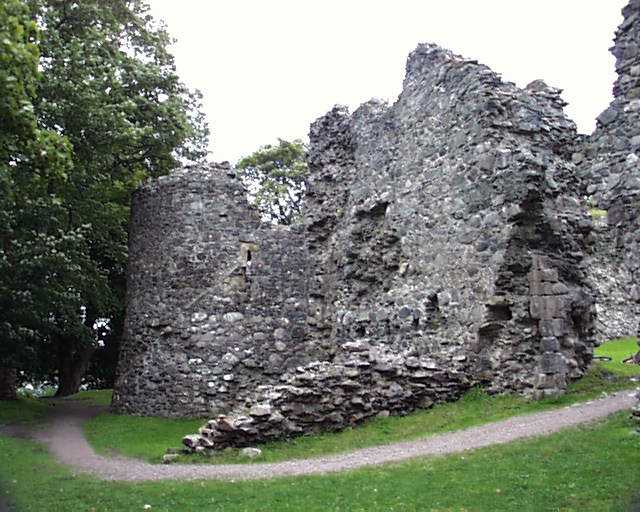 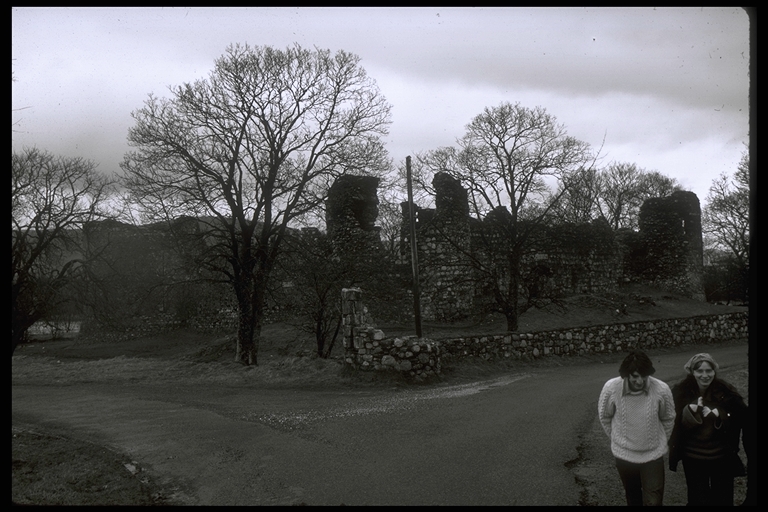 Inverlochy Castle, of c. 1270-1280 date, is a simple square courtyard contained by four high curtain walls. A massive round tower projects boldly from each corner, one, the donjon (Comyn's Tower) (D MacGibbon and T Ross 1887), being larger than the others.
The enclosure so formed has two entrances, plain pointed arch openings, without foreworks or gatehouse, through the centre of two opposite sides. The entance is but a doorway in which hung a heavy two-leaved door secured by a draw-bar and protected by a portcullis. The curtain is surrounded by a wide ditch and outer bank concentrically disposed about it. The ditch is silted but clearly definable round 3 sides. the fourth side confronting the River Lochy, was not ditched. The entrance through this side was the water-gate; before it there would no doubt be a channel from the river and a small harbour or dock. Water from the river was introduced to the ditch round the other 3 sides.
The curtain and towers stand to a height of about 30'. (S Cruden 1960) (Toy {S Toy 1966} describes and plans a barmkin here. Not only is this a 'folly' but his description and plan of it are in error).
There is no proper history for this castle but tradition has it that it was built by the Comyns, Lords of Lochaber and Badenoch from about 1080 to the accession of Bruce in 1306. In 1505 its ruined site was granted to George, second Earl of Huntly on condition he built 'a towerand strength and Barmekyn' to serve as a Royalist garrison.
D MacGibbon and T Ross 1887; S Cruden 1960; S Toy 1966.

The principal area of excavation was the NE tower where rubble up to 1m deep overlay the original floor of roughly levelled construction debris. The tower had been built against disturbed soils which included skeleton remains, believed to be human. This indicates an occupation of the site earlier than that of the extant castle's construction.
Adjacent to the tower and within the courtyard a 5m by 4m trench was opened. Nothing in this trench substantiated the theory that there had been a range of timber buildings in the E of the courtyard although a line of squared sockets along the entire length of the E curtain, at first floor level, would suggest that such buildings had once existed there.
Access to the living quarters of the NE tower was probably gained via the first floor and in the N curtain was an entrance way (later blocked) that may have coincided with this level. A sandstone threshold in the basement exhibited almost no sign of wear suggesting this to have been a little-used room.
A cobbled floor of good construction was partially uncovered outwith and adjacent to the N curtain and the NE tower. This was of late date and may have belonged to a building erected by the Invergarry Ironworks Company in the second quarter of the 18th century.
J Lewis 1983.

The principal area of excavation in 1989 consisted of the interior of the SW tower and a 3m wide trench between the tower and the castle's S entrance. In addition, the removal of vegetation and losse debris provided an opportunity to examine the wall-head of the somewhat complex W curtain wall.

South West Tower and Courtyard
Both areas were covered with humic soils and rubble, up to 1.4m deep, derived from masonry collapse and, on the evidence of very modern artefacts, perhaps also from recent, unauthorised activities within the monument. In many places these deposits lay directly upon tightly-folded and fractured schistose bedrock, there being no surviving trace of a floor surface or any other occupation horizon.
Where the outcrops of bedrock were high, the castle walls were built directly upon it; otherwise the masonry was laid on foundations of mortar-bonded granite rubble or, particularly within the SW tower, simply upon buried topsoil.
Prior to excavation, the ground level adjacent to the S curtain was considerably higher than at any other within the courtyard, giving rise to speculation of an internal timber range, similar to that against the E curtain. Excavation, however, demonstrated that the raised platform was simply the result of high outcropping of bedrock.

West Curtain Wall
At wall-head level, the 3m-wide curtain comprised three main elements: 1. an inner skin of rubble masonry, 0.55m to 0.6m wide and 0.8m high;
2. a 0.55m to 0.6m outer parapet, which had been remodelled by the addition of battlements in the 19th century.
3. the intervening wall-walk.
There were neither paving slabs over the walk-way's mortared rubble surface nor were there any drains to remove surface water from it, suggesting the wall-head may have been roofed.
Four steps descended from the level of the SW tower's upper storey to that of the main section of the wall-head. Three further steps led down to the top floor (possible guard chamber) of the NW tower and, independently, to the wall-walk atop the N curtain.
Two deep beam sockets and a single projecting corbel, adjacent to the donjon, may have been associated with a garderobe overhanging the ditch to the W of the castle. Another socket, further S, was for a beam projecting into the courtyard.
Sponsor SDD HBM
J Lewis 1989.

The wallhead of the E section of the S curtain was cleared of debris by Scotia Archaeology Limited prior to the consolidation of its masonry. Midway along this stretch of wall, below a thin skim of loose debris, was a block of compact, well mortared rubble, almost 4m long and covering the width of the wall to a height of 0.8m. Although there were no visible surviving impressions of treads or risers within this rubble, this material is tentatively interpreted as the base for a short flight of steps which perhaps led into an upper storey of a building set against the inside face of the curtain wall.
Sponsor: Historic Scotland.
J Lewis 1994c.

NN 120 754 Exploratory excavations were carried out by Scotia Archaeology Limited at several locations within and adjacent to the 13th century castle.
A small, L-shaped mound in the E corner of the castle courtyard proved to be of relatively recent origin.
Work outside the main (SE) entrance to the castle revealed that the low terrace against the curtain wall was bounded by a wall which abuts and presumably post-dates the putative barbican which survives to a height of at least 1.0m.
Several trenches were excavated against the outer enclosure wall which encircles the castle. It is thought that parts of the wall, which has a maximum width of only 0.5m, were once field boundaries and that its SE side, including its turrets, are of 19th century date.
Sponsor: Historic Scotland.
H Smith 1995.

NN 120 754 A trench, measuring approximately 8m N-S by 3m wide, was excavated by Scotia Archaeology Ltd within and adjacent to the N entrance (the seagate) to the castle. This revealed what may have been a metalled surface through the gateway; and, abutting the outer face of the N curtain, the fragmentary foundations of a substantial wall, perhaps an element of a structure similar to the barbican at the S entrance to the castle (see Discovery and Excavayion, Scotland 1995, 41).
In addition, a watching brief was undertaken during the excavation, by Historic Scotland's DEL squad, of drainage trenches from the W curtain wall and NW (donjon) tower, through the seagate and beyond the N limits of the castle. In one of those trenches was found the lower part of an articulated human skeleton, perhaps dating from the second battle of Inverlochy in 1644. Another drainage trench exposed the foundations of what appeared to be the S wall of a range, built against the W side of the N curtain.
Sponsor: Historic Scotland.
H Smith 1996.

LOC Local Plan, Feb. 1991: P47/4.5.58. Heritage Buildings. The Council will encourage improvement/enhancement and where appropriate, suitable after use of sites like this.
J Aitken : 05/06/01.