A vitrified fort on the sloping summit of an eminence on the western flank of Glen Nevis. 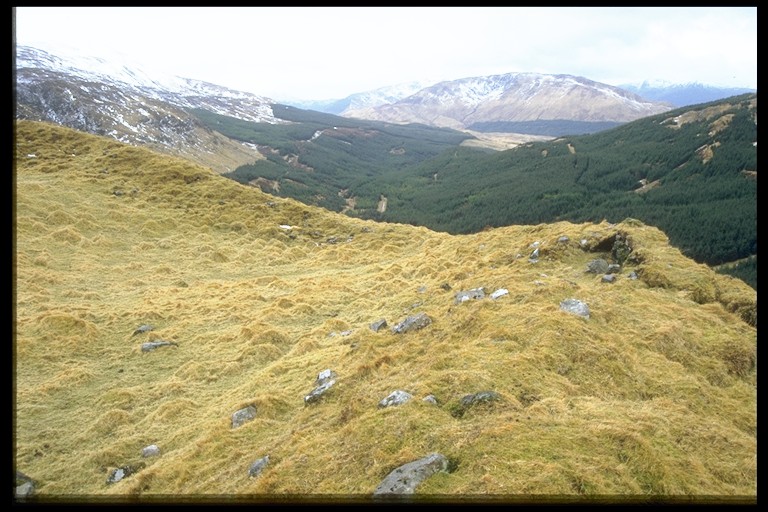 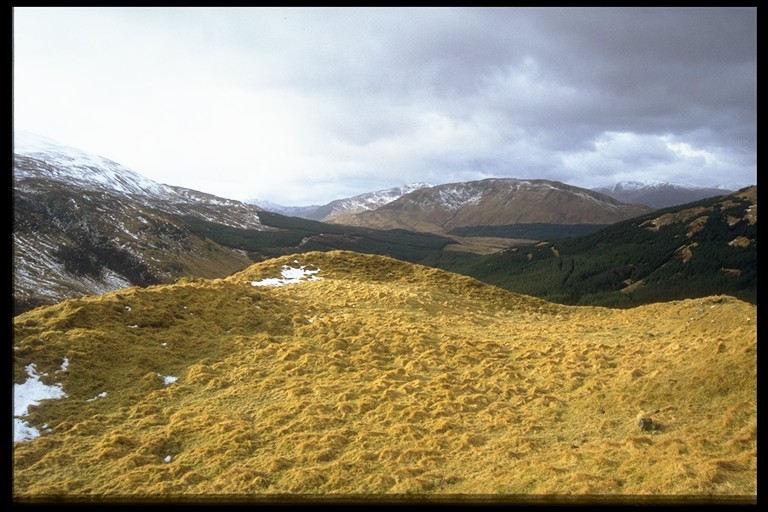 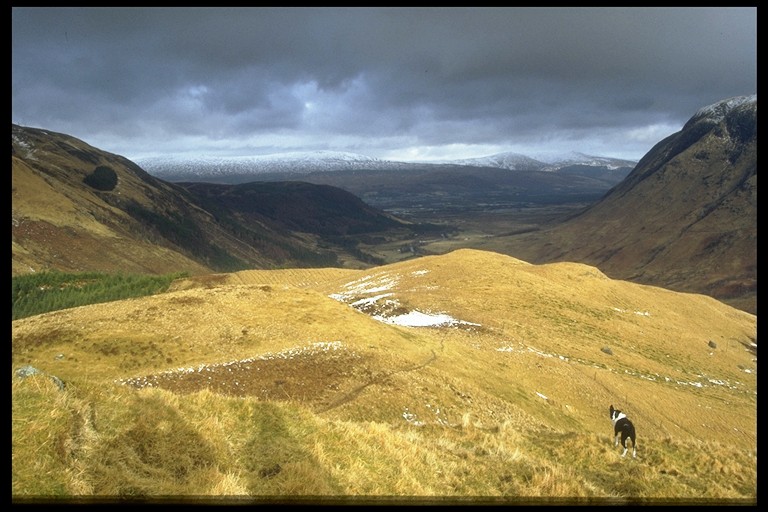 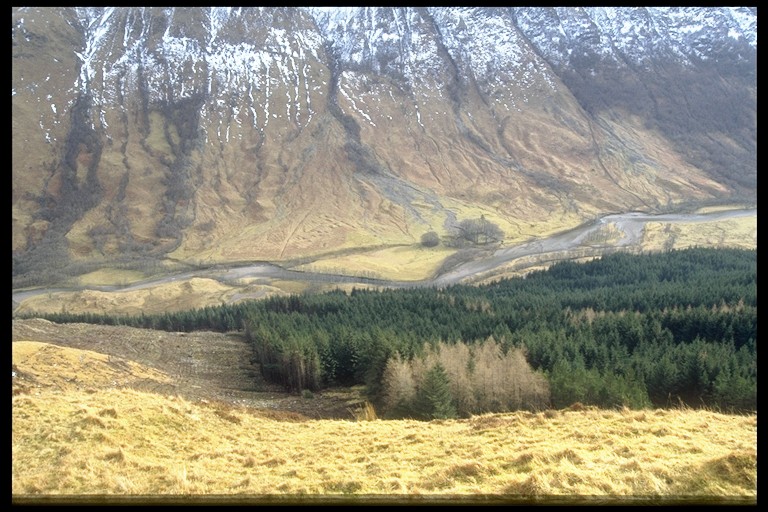 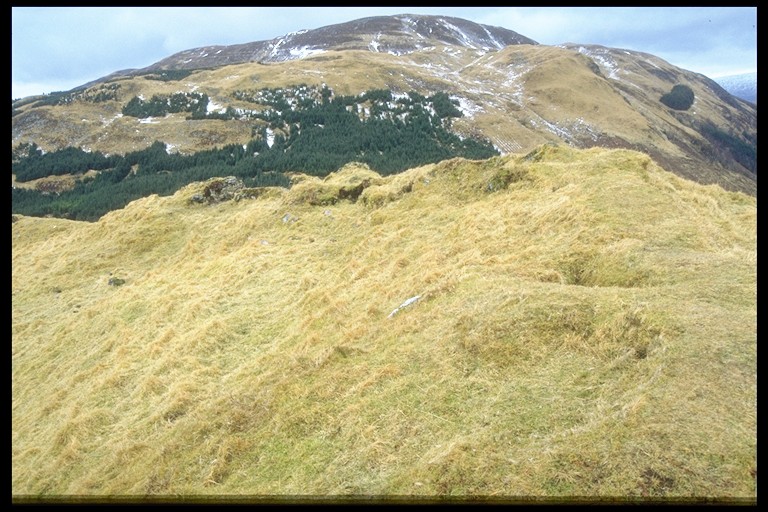 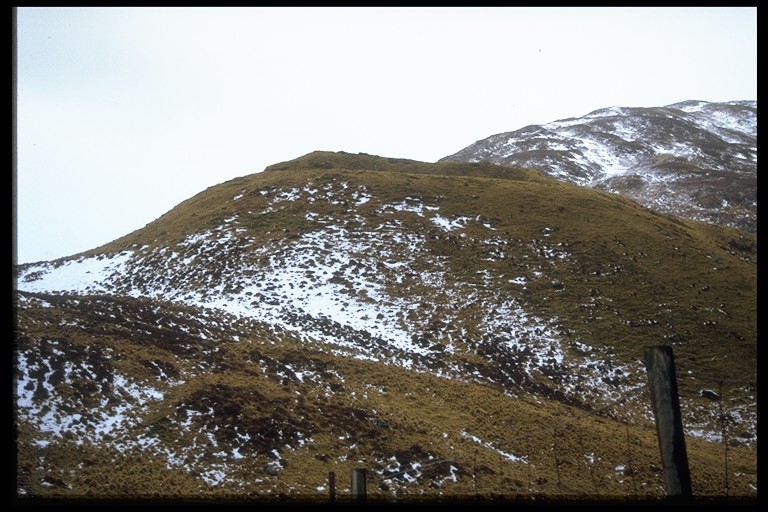 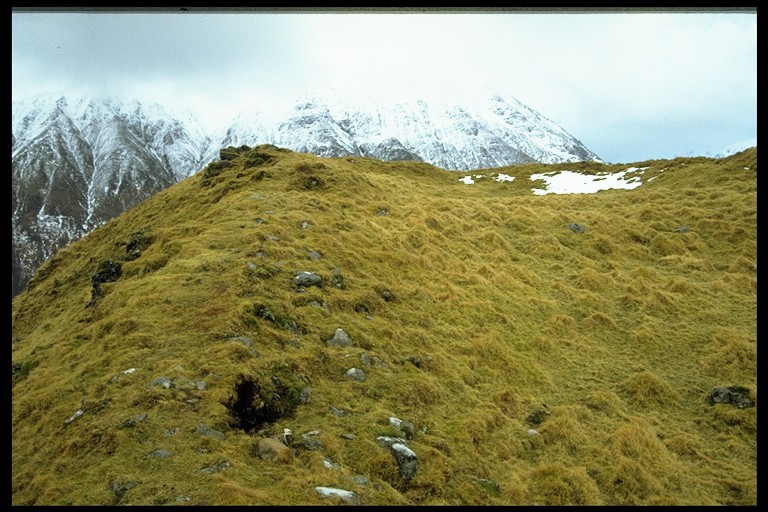 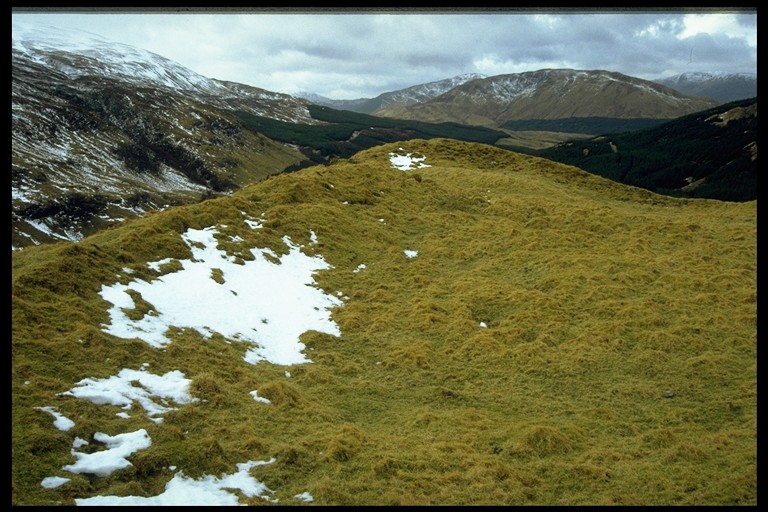 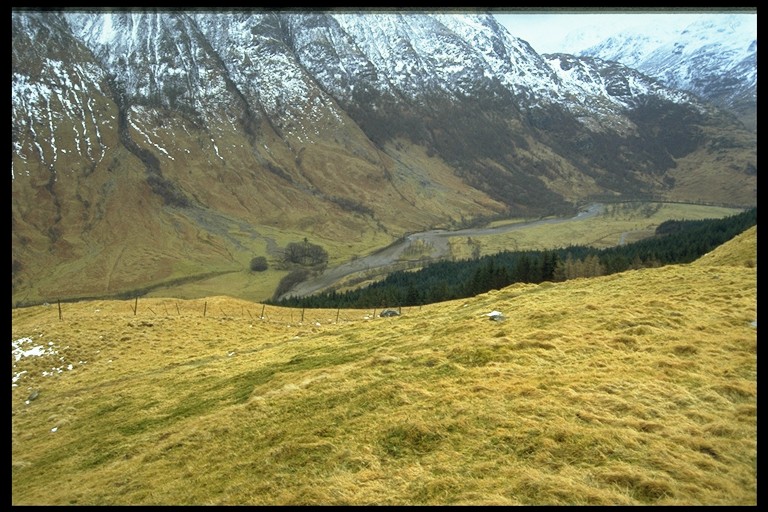 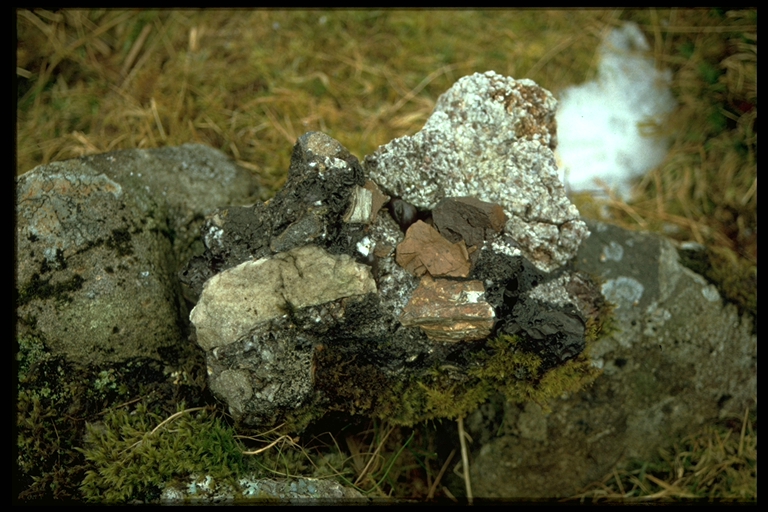 Dun Deardail, a vitrified fort, occupies the sloping summit of an eminence on the W flank of Glen Nevis. It is near-pear-shaped on plan with its long axis lying ENE-WSW, and measures internally c.46.0m by c.27.0m at its widest in the WSW and c.11.0m at the narrowest part in the ENE. The ruinous stone wall is spread to a maximum of c.8.0m in the N, and to a minumum of c.4.5m at the entrance in the W, with a maximum height of c.2.5m, and shows numerous lumps of vitrifaction, but no evidence of built masonry. The interior slopes down unevenly from E to W, with, in the E, two stony scarps turning N-S supporting two level platforms. The lower of these is presumably what RCAHMS (MSs notes, 3 July 1956, R W Feachem) describes as "a secondary internal division, possibly recent", but there is nothing to show that it is not contemporary with the fort. The entrance, marked by a gap at the lowest point in the wall, shows no trace of "a wall foundation 23ft long flanking its S side" described by Christison (1889). A faint path up the NW slope to the entrance is probably the original approach.
Around the top of a lower knoll approximately 120.0m N of the fort are traces of a wall, noted by Christison and described by Feachem as an outer defence, but by OS (ASP; 18 July 1961) as natural. It appears to be the scant remains of an associated enclosure wall rather than a defence, and can be traced around the E, N and W sides of the knoll. At each end it disappears in marshy ground at the base of the eminence on which the fort stands. Traces of what is probably a continuation of the same wall occur to the S of the fort and here it seems to have terminated on the rock face forming part of the SE defences. Within this enclosure, at the base of the N slopes of the fort beside a marshy area, is a circular depression c.4.0m diameter, c.0.5m deep which is probably a well or cistern. Feachen compares this enclosure wall with a similar structure at Torr Dhuin, Auchteraw, Invernessshire (NH30NW), and it is similar, although on a smaller scale, to that at Tap o'Noth, Banffshire. (NJ42NE 1).
The name, now spelled Dun Deardail, has been in dispute in the past being published as Dundbhairdghall on OS 6" 1873, and noted as Deardinl and Dun dearg suil by MacCulloch, and Dun dear duil by W Johnson (Plan of the Lordship of Lochaber, 1831; West Highland Museum, Fort William). Surveyed at 1/10,000.
Visited by OS (AA) 18 May 1970

A topographic archaeological survey was carried out by Headland between September 2010 and February 2011 as part of a Forestry Commission project to survey five Iron Age forts, four of which were in Highland region. <11>

A detailed topographic survey was carried out by Rubicon Heritage Services in February 2014 on behalf of Forestry Commission Scotland. The purpose of the survey was to provide an enhanced baseline record of the upstanding remains at the site which will inform future conservation and management of the monument. Results from this survey provided digital terrain models recording the nature and extent of surviving stonework and earthworks. <12>

Archaeological investigations at the vitrified fort of Dun Deardail were undertaken as part of a three years project between 2015-2017 by the Nevis Landscape Partnership, local volunteers and AOC Archaeology. This comprised the excavation of 8 trenches and topographic and geophysical survey across three seasons. Trenches were placed across the walls of the upper fort, within the interior of the fort and across an external bank defining a lower plateau outside the hillfort. Evidence regarding the layout of the hillfort, the vitrification of the ramparts, pre-vitrification occupation of the hillfort and post-vitrification occupation of the hill fort was uncovered. Full details are available in the attached DSRs, including a suite of radiocarbon dates from the first season. Post-excavation results are anticipated in a final publication of the site. <13> <14> <15>

In June 2017 an aerial survey of Dun Deardail was undertaken by Skyscape Survey on behalf of Forestry Commission Scotland. A high resolution 3D model of the site was created from this, and the resulting data surface model was processed to remove the vegetation and produce a data terrain model. <16>

This site was included in the Atlas of Hillforts of Britain and Ireland online database. See link below for site entry. <17>

An information booklet for Dun Deardail and the recent archaeological survey and excavations there has been produced by Forestry Commission Scotland. It available on their website (see link below). <18>

A piece of vitrified stone from Dun Deardail was acquired by the NMS in 1905 from Colonel McHardy. It was one of eight pieces collected from the walls of various forts. Acc. No. HH 86. <19>

Slaggy material from Dun Deardail is with the Cambridge Museum of Archaeology and Anthropology. It is listed under Acc. No. 1961.216 and described in the catalogue as 'Lump of slaggy material forming rampart of vitrified fort on west side of Glen Nevis called Dun Deardail. Unfired clay, includes mud'. <20>