A medieval castle, thought to have been built in the 12th or 13th century. The castle was reduced to ruins in 1719 during the Jacobite uprisings and was reconstructed in the early part of the 20th century. 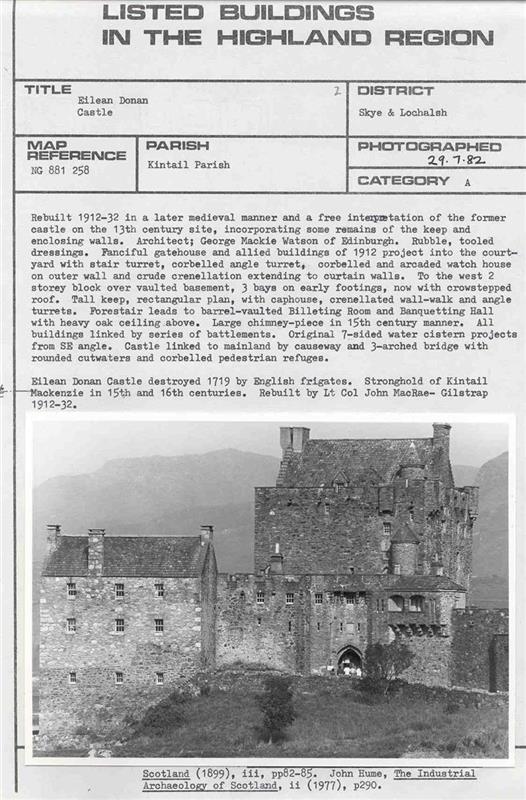 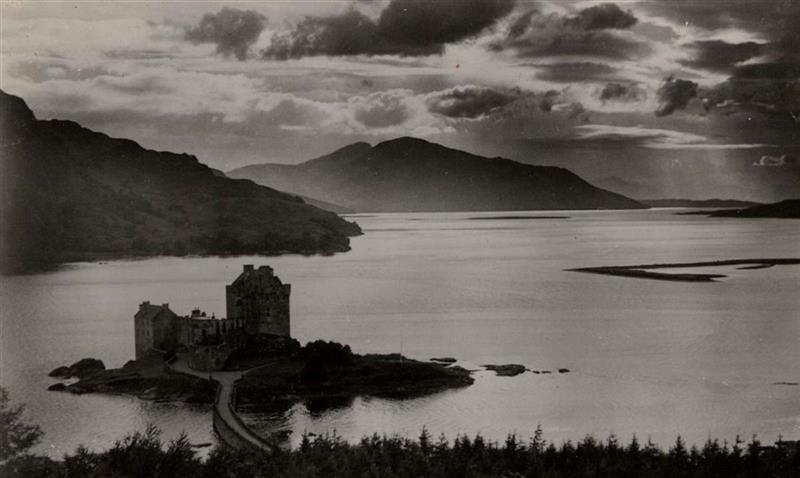 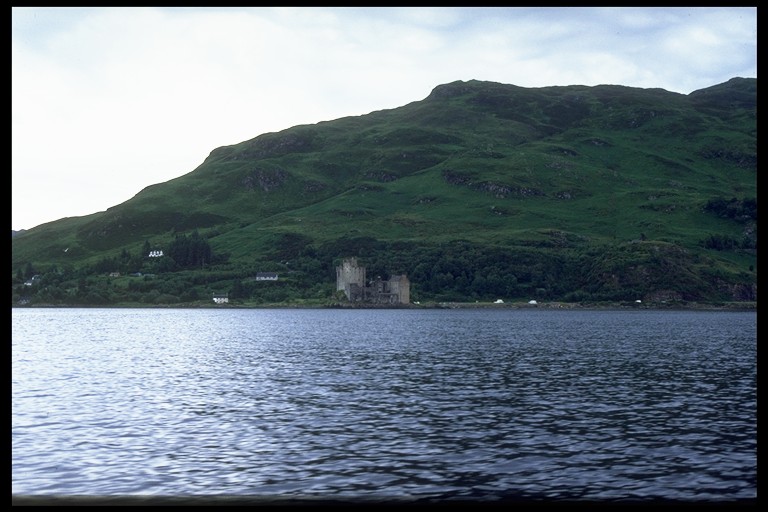 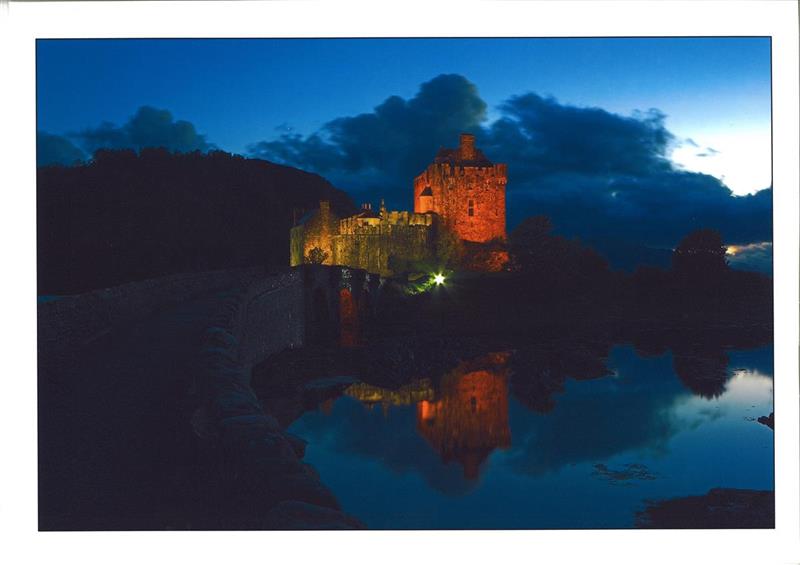 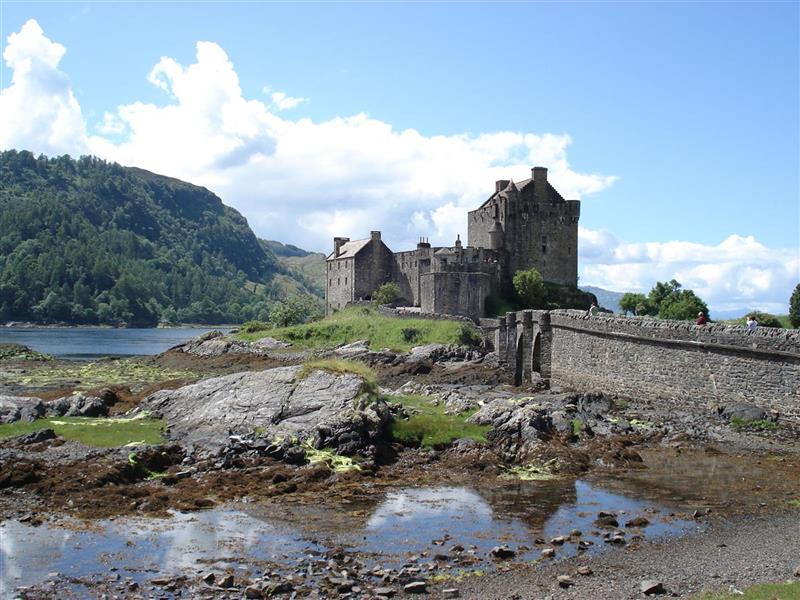 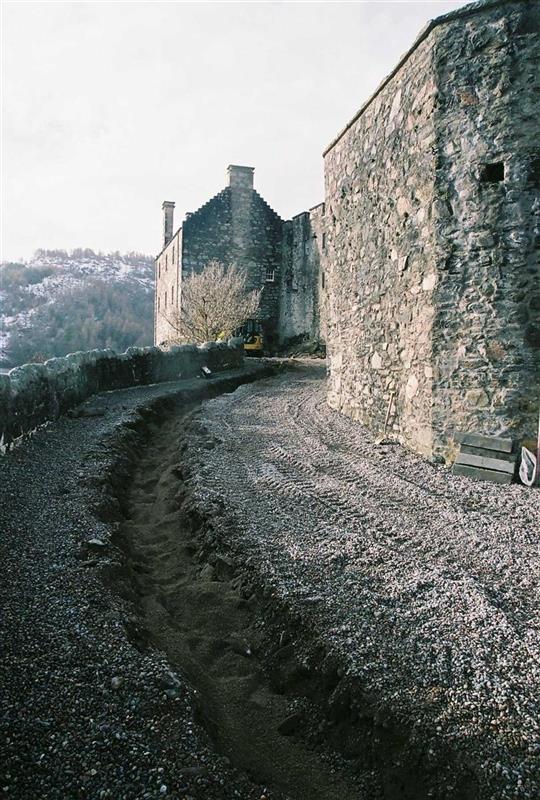 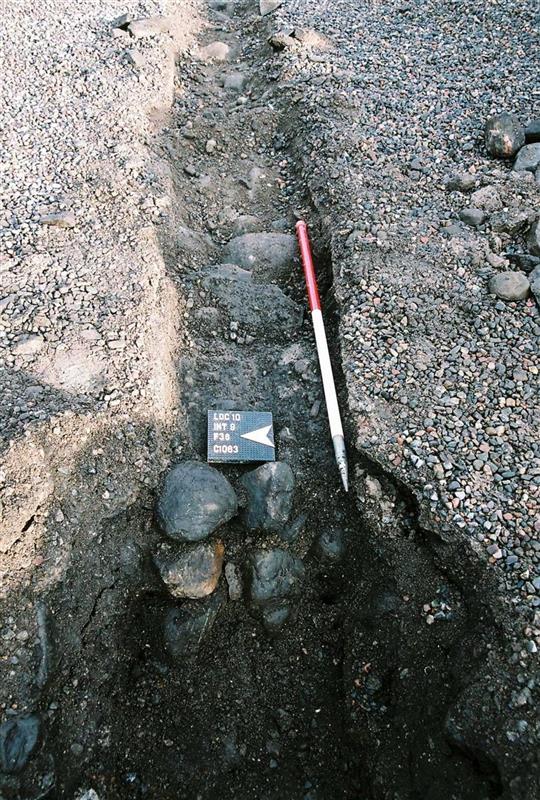 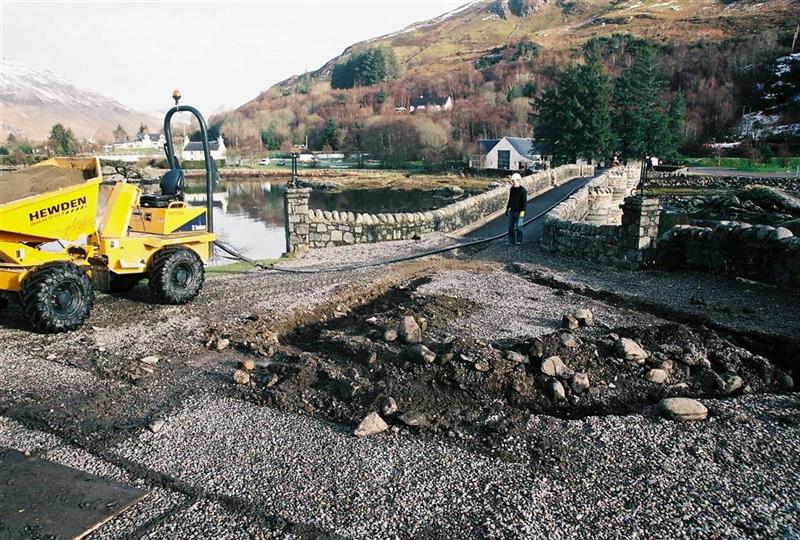 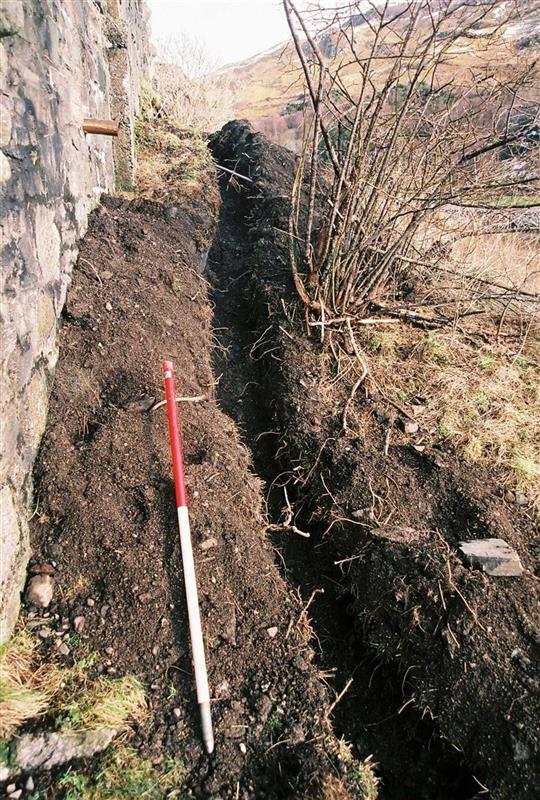 This castle is said to have originated as a vitrified fort, the remains of which were visible on the landward side of the island in 1912, in the form of a wall of considerable dimensions (T Wallace 1921) and part of the later castle wall is built over the remains of a shell-heap.
This fort was replaced in the 13th c by a castle consisting of a great wall of enceinte, the outline of which can still be traced. A narrow passage between two walls seems to have formed the entrance from the loch on the west. It was probably originally a steep staircase, but is now only a slope of stones. A keep was erected on the NE angle of the enclosure probably in the 14th c, its N and E walls superimposed on the older wall. The foundation of the tower, 57' x 43', with walls 10' thick, exist all round and fragments of the N and S walls still stand to a considerable height.
An unusual feature is a heptagonal water tower lying to the east of the castle, but connected to it by walls, about 5' thick and probably originally about 15' high, which enclose a long sloping court.
In 1719 a body of Spanish troops were beseiged in the castle which was battered and ruined by three English men-of-war. It has been restored by Lt-Col MacRae-Gilstrap during the years 1912-1932. (D MacDonald, A Polson and J Brown 1931)
D MacGibbon and T Ross 1889; T Wallace 1921; D MacDonald, A Polson, J Brown 1931. <1>-<3>

Castle Donnan, a 13th century keep, formerly ruined and now restored, as described above, built possibly on the site of a vitrified fort. All that remains is some heaped close by the water cistern.
Visited by OS (N K B) 29 September 1966.

Castle Donnan is generally as described. A straight length of collapsed walling some 55.0m long lies close to the shoreline on the NW side of the bridge. This is what Wallace refers to as "a wall of considerable dimensions", and loose pieces of vitrification occur amongst the debris. Despite this, however, it may be relatively modern but there is little doubt that a vitrified structure formerly occupied the island.
Visited by OS (A A) 19 June 1974.

Transcribed from Architecture Catalogue slip:
This Castle has been referred to under the names of Donnan, Donan, and Eileandonan, and latterly by MacGibbon and Ross as Ellandonan. It stands at the West extremity of the Parish of Kintail, Ross-shire, and Loch Duich. At full tides this Castle, consisting of a Tower and Rampart, and with a built well, became isolated from the Mainland. According to Statistical Accounts, it was demolished in 1719, after the Battle of Glensheal, by a warship. In the National Library of Scotland is a series of Military Maps and Drawings of the Board of Ordnance (Reference MSS.1645-1652), and in Case, or Volume, No.1648 is this Drawing numbered Z.3/26 : - "Plan of the Castle of Island Dounan", scale 10 Feet to every Inch, with Profile or View. It is indicated as 'Surveyed & deliver'd' by Lewis Petit. There is no date, but there is a copy dated 1741. It is recorded in the Index Volume No.1652 of the series mentioned above that the Castle of Island Dounan has been restored as a dwelling by Major Macrae Gilstrap, who purchased the ruins.

MacGibbon and Ross, in "The Castellated and Domestic Architecture of Scotland", Vol.111, page 82, give a small Plan and a Sketch in pen and ink. They say that unfortunately its Architectural features were almost entirely destroyed and on the Plan the buildings seem to have been in a ruinous state. The Keep is shewn as a rectangular building some 57 Feet long and some 43 Feet wide, with walls 10 Feet in thickness. What they call an heptagonal Tower 20 Feet in diameter internally and placed at a considerably lower level that the Courtyard of the Castle, they presume to have been a Water Cistern.

REFERENCE:
NATIONAL LIBRARY OF SCOTLAND
MSS 1645 - 52 Military Maps and Plans transferred from Bord of Ordnance
has view of castle and plan by Lewis Petit No.1648
(NMRS has photographic copy & negative of this view and plan)
& sketch by A. Rollo 1949

Archaeological survey works took place in March 2008 to form a basis for future investigation and research. An outline plan has been produced of known features relating to both the medieval castle and the 20th-century reconstruction works. <5>

Further archaeological evaluation took place in September and October 2008. Five trial trenches (numbered 3 to 7) were excavated in order to inform the preparation of a Conservation and Research Management Plan for the site, and to answer specific research questions.
The northwest tower was cleared of vegetation, and rubble deposits excavated from within it (Intervention 3), which allowed the layout of the tower to be located accurately, and records made of internal elevations. The rubble deposits were not deep suggesting the area had been cleared previously.
Intervention 4 was situated to the immediate south of the northwest tower. Excavation revealed structural evidence relating to the western curtain wall, and demonstrated a level of truncation in this area. Deposits relating to medieval occupation and a metal-working (iron-smithing) horizon, including an in situ hearth, were encountered. These deposits had been disturbed at an unknown date by an episode of ‘wall-chasing’, which had removed stratigraphic relationships between the medieval deposits and structural features.
Intervention 5 was positioned to investigate the northern stretch of curtain wall and 20th-century midden. The curtain wall was identified as a substantial rubble-built construction. Medieval occupation was also encountered, again disturbed by a wall-chasing trench. The midden was found to represent a substantial deposit of mortar and stone, thought to derive from the recycling of building stone during the reconstruction of the castle in the 1920s and 1930s.
The remains of a possible northeast tower were investigated (Intervention 6) and found to be of probable medieval origin. The remains of a truncated wall were encountered, to the rear of which a substantial rubble deposit appeared to represent the infilling of a possible tower.
A single trench was excavated to the south of the island (Intervention 7), revealing a massive curtain wall which measured over 5m wide and survived to over 1.30m in depth.
No south western tower was identified during the evaluation, but it is possible that any such tower was integral to the curtain wall and therefore not identifiable in plan. <6>

A watching brief was conducted on groundworks associated with insertion of a sewer pipe trench. A length of substantial curtain wall foundation was exposed and may have been associated with two areas of lime mortar surface. A possible former building stance may also have been represented by a large spread of demolition material. The pipe trench was diverted to avoid the in situ remains of the curtain wall. <7>