A dun complex comprising a substantial rampart, a tower and a possible outwork to the west. 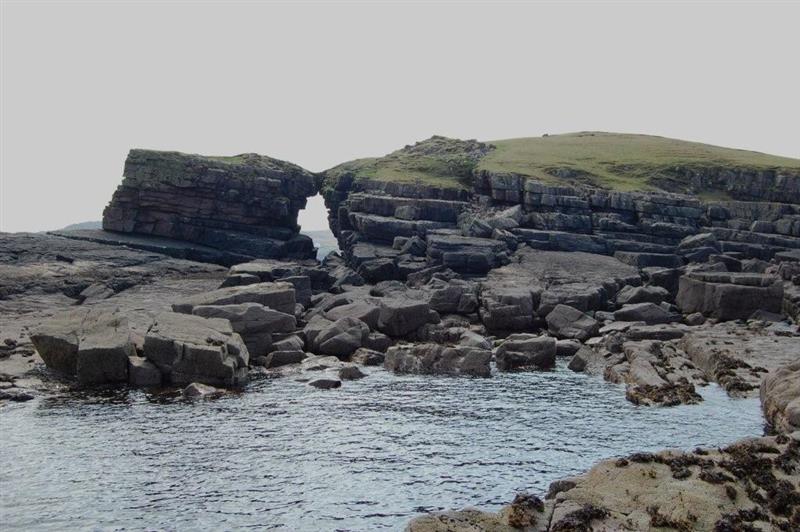 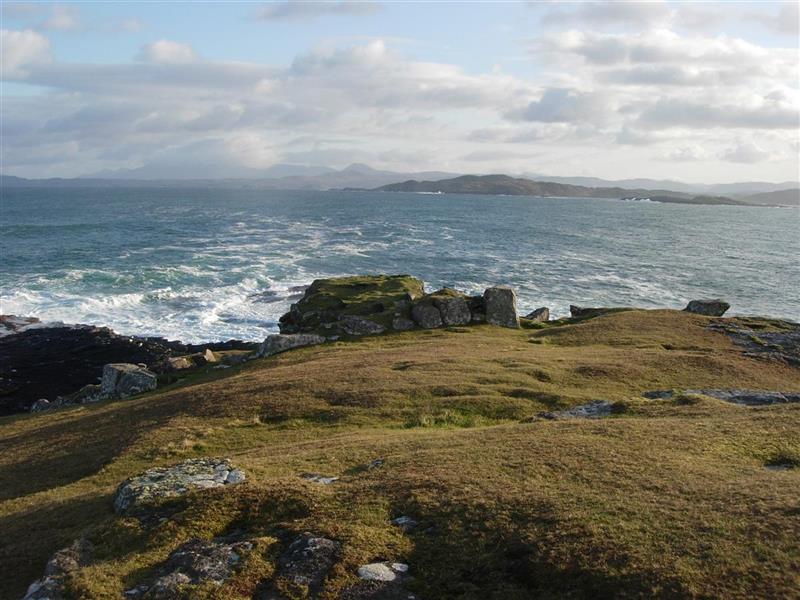 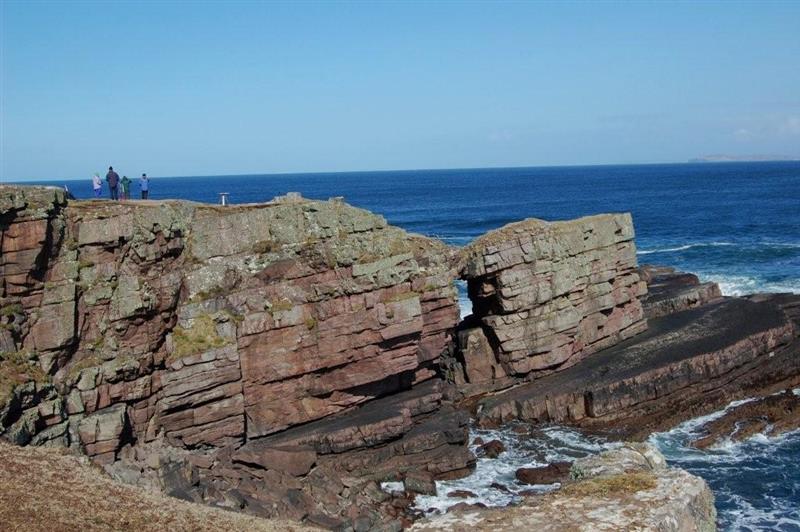 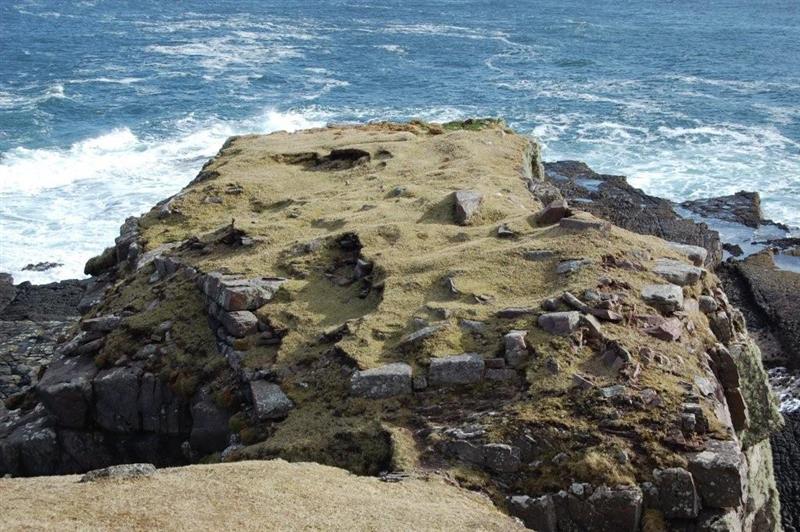 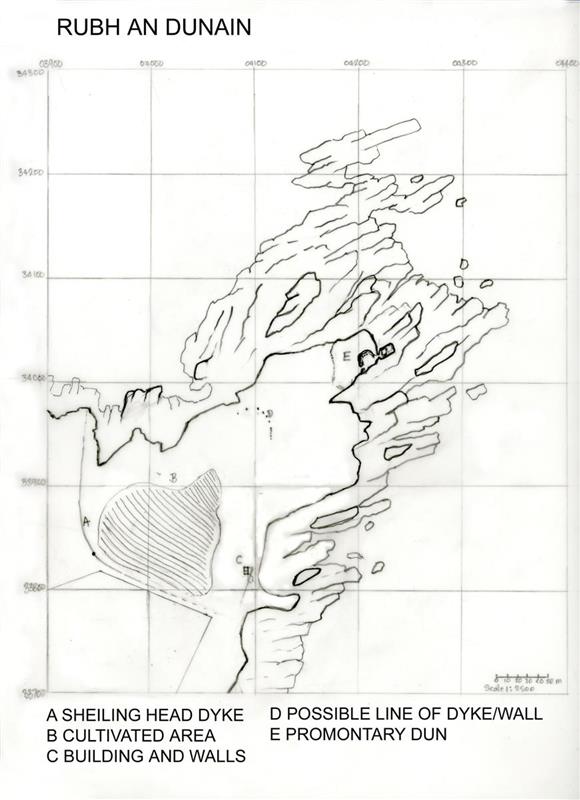 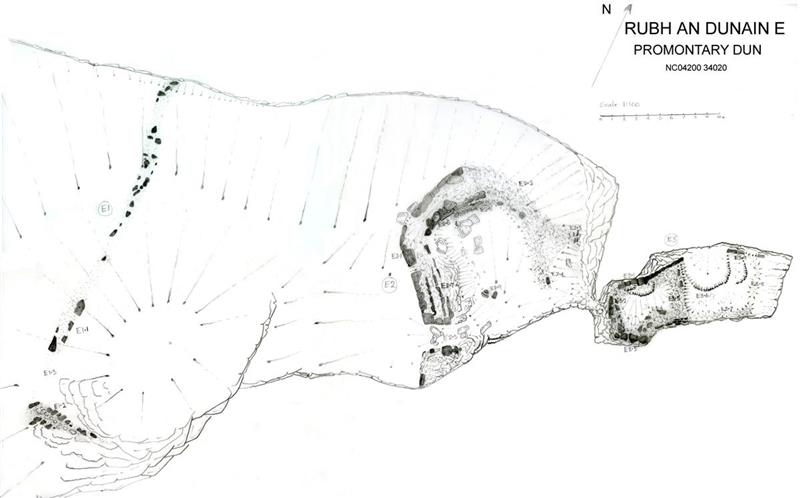 An Dunain, Culkein: At N end of Bay of Culkein are remains of a fortress of great strength. A promontory is divided into two portions by a chasm bridged over by neck of rock some 3' to 4' long, about 5' deep and not more than 1'6" broad. The outward portion to which this bridge leads rises abruptly from shelving rocks below to a height of about 50'. Its surface is some 50' long by 20' broad. At W, or landward end, for a distance of some 20' there are remains of a building, which, above cliff to N, is still visible to a height of 3' or 4'; elsewhere there are only indications of wall running along N side. About 40' landward from bridge neck of promontory has been traversed by a wall of great strength, about 7' thick, faced outwardly with huge blocks of stone. The entrance has been at S end of this wall, through a passage 8' long and apparently 3'6" wide. The right side is completely ruined. The area enclosed within the wall is roughly oval, measuring about 40' by 37'.
RCAHMS 1911. <1>

A promontory fort formed by wall 40' long and 7' thick, built of very large blocks, cutting off peninsula 100' long. The enclosed area is divided by a natural chasm which is crossed by narrow rock bridge.
R W Feachem 1963. <2>

There is circular enclosure 6m diameter immediately inside rampart; and on stack there is base of a tower 5m by 6m on what is possibly an earlier foundation 5m to 12m.
Information contained in letter from T C Welsh, 4 July 1971.

An Dunan: The remains of a dun with outwork. The dun occupies a roughly rectangular stack measuring c18m NE-SW by 6m NW-SE. At its SW end and completely blocking the approach is what appears to be a block-house which is too obscured by turf-covered debris for positive identification. Although outer face of well-squared blocks is visible in places to 4 courses, no other architectural details can be seen. The approach to stack has been defended by an outwork consisting of a curving boulder-faced wall averaging 2.3m in thickness. The entrance, towards its S end, splays from 2.2m at its outer end to 1.8m internally. The circular enclosure and the base of a tower on an earlier foundation are figments of Welsh's imagination.
Surveyed at 1:10,000. Visited by OS (J M) 8 August 1974.

This site was described and surveyed as part of a Scotland's Rural Past study of Rubh' an Dunain. A full description and plan of the site can be found in the project report. The site consists of a massively walled sub-circular enclosure (E2) with an entrance at its southern end and indications of possible internal structures. Across a narrow natural arch are the remains of a small tower or blockhouse and a further enclosed area (E3). The tower is a substantial sub-rectangular structure measuring about 5m by 7m. It survives best on the north side where up to four courses of well-built masonry are visible. To the west of the rampart E2 the survey identified a curving line of embedded stones which possibly define a further outwork (E1), again with a probable entrance at the southern end. This is believed to be connected with the dun rather than being a later field boundary. It is possible that this was never a substantial wall but rather a wooden or wicker palisade of which some of the packing stones remain. It is suggested that the dyke which defines the later shieling (see MHG12214) could possibly be contemporary with one or more phases of the dun, thus preserving the outline of an Iron Age or early medieval fortified farmstead. <3>

The site is included in the Atlas of Hillforts of Britain and Ireland online database. See link below for site entry. <4>