A hut circle at Garvie Bay. 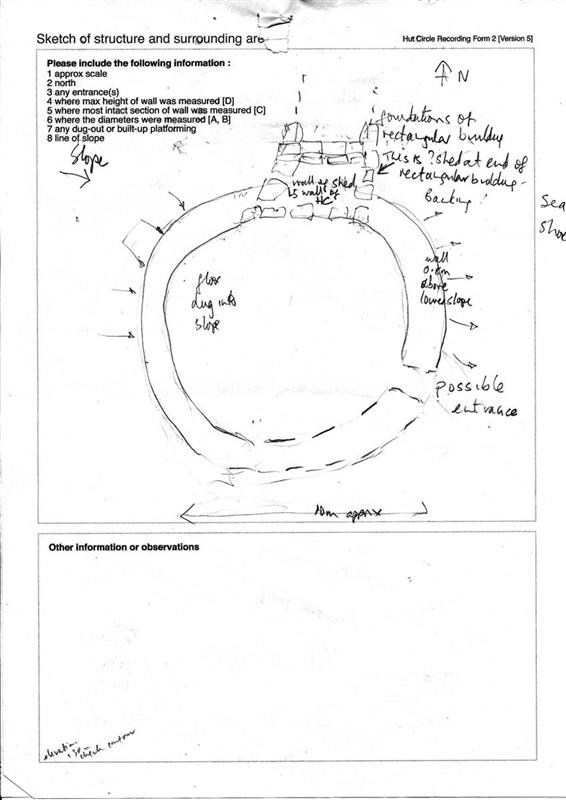 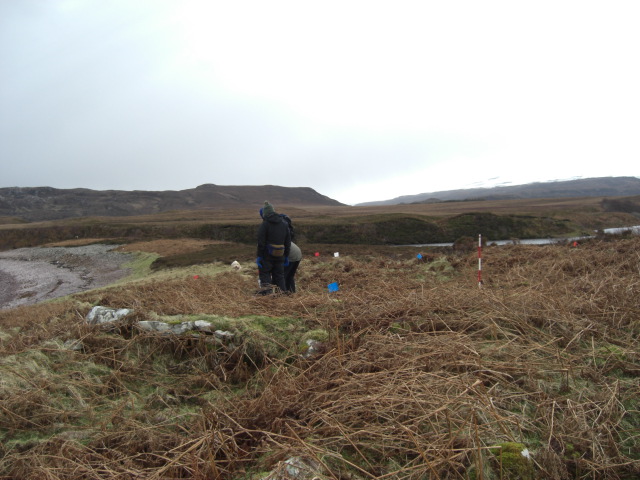 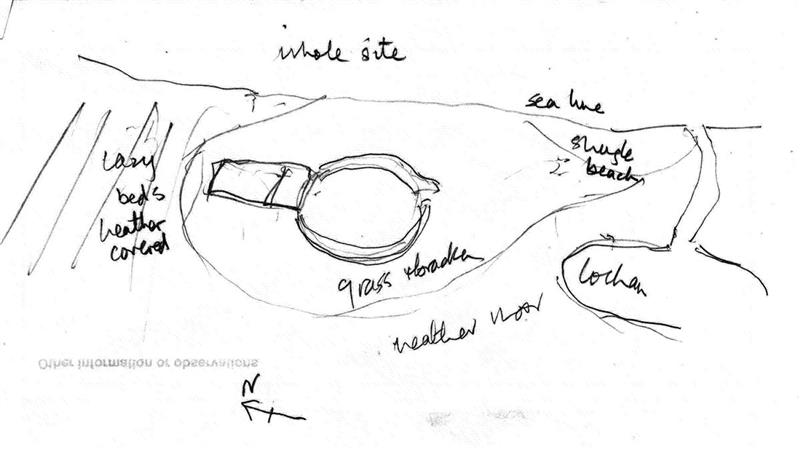 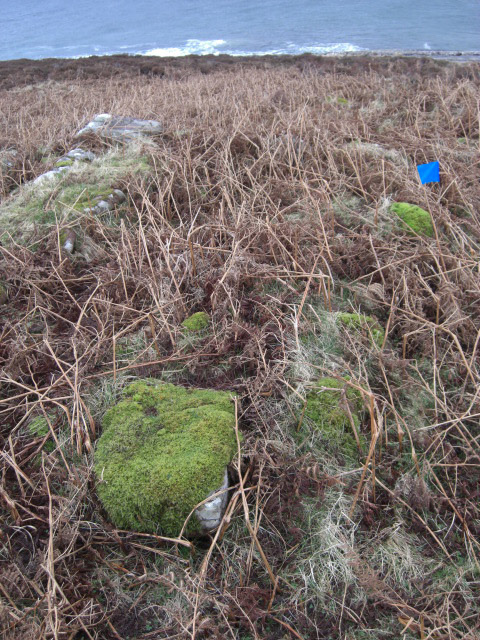 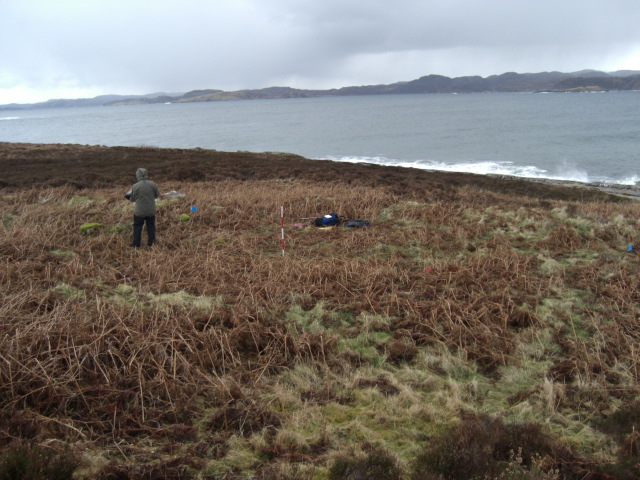 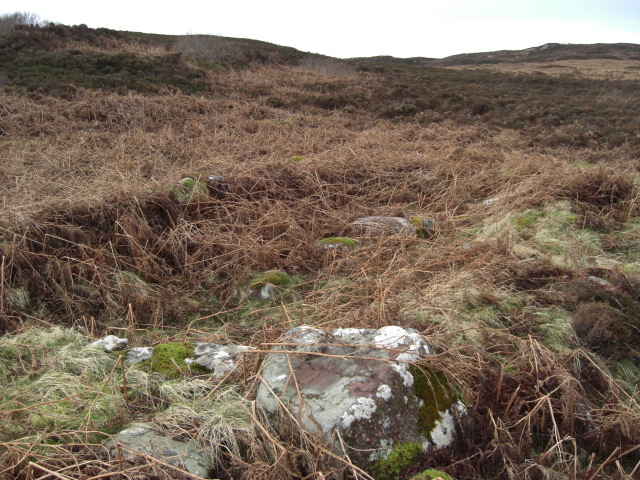 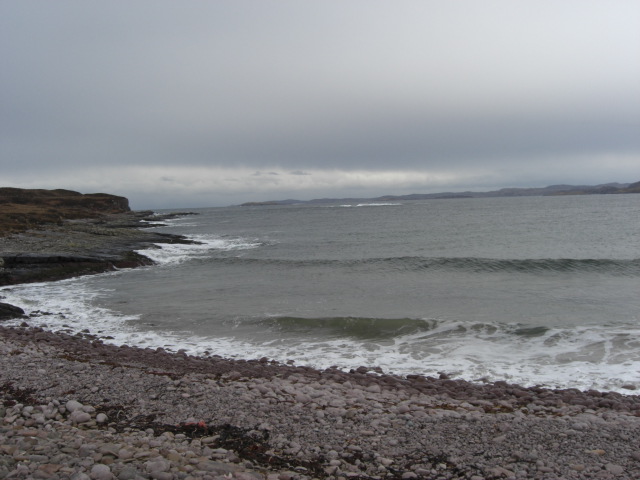 A hut circle at Garvie Bay, first recorded by RCHAMS during a survey of the Achiltibuie area in 1994.

There is a hut-circle, a rectangular building, and two small areas of lazy-bed cultivation on the W side of Garvie Bay, about 200m WNW of the outfall from Loch Garvie. The hut-circle measures 10.4m NE-SW by 9.4m transversely within a bank 0.6m high and spread to 1.6m in thickness in which some inner-facing stones are visible (ACHIL94 465). The building (ACHIL94 466) overlies the N arc of the hut-circle wall. It is rectangular, built of faced-rubble with squared corners, and measures internally 6.2m NNW-SSE by 3m transversely. The walls are 0.6m thick and survive to a height of 0.5m. The entrance is in the WNW side. On the gently-sloping ground around these two structures there are lazy-beds covering about 0.3ha, and a short distance to the SE, on the N shore of Loch Garvie at NC 0393 1366, there is another area of lazy-beds, extending to about 0.2ha. Passing between these two cultivated areas there is a bank which runs SW from the shore for about 140m before fading into boggy ground at NC 0382 1360. (ACHIL94 465-6)
Visited by RCAHMS (SDB) 10 August 1994

Site visited and recorded during a survey by Glasgow University in 1996 of the intertidal zone and the coast edge (50m from the mean high tide mark) between the Rivers Ullapool and Culag. A complex comprising two adjoining structures and adjacent lazy bed cultivation plots situated on the southwest side of Garvie Bay, adjacent to Loch Garvie (max extent 150m by 80m NNW-SSE). Both structures were obscured by dense bracken and were not fully inspected, these buildings were recorded as part of the ALS (Sites 460-461) and comprise (see MHG45618 for the rectangular building): Subcircular hut circle (13.6m x 12.6m NE-SW) defined by a low stony bank with occasional kerb stones (0.6m high by 1.6m thick). The structure underlay the south end of building 1 indicating that it is earlier in both construction and occupation date (ALS465). <1>

203902 913694 Garvie Bay 1 CM003: The hut circle was visited by A Welti and C MacNeilage in 2010 as part of research for a dissertation on hut circles in Wester Ross. This was part of a degree course overseen by Aberdeen University. This circular structure lies to the west side of Garvie Bay, 20m distant from a sheltered shingle beach. It is about 200m from a stream and a freshwater lochan, Loch Garve. It sits on a platform dug into and built out from a gentle slope. From the site there are panoramic views inland and to the sea. Average inner diameter is 8.65m, external diameter is 13.5m. Wall thickness is 2.0m and maximum height is 0.7m. The probable entrance faces southeast. The seaward entrance terminal may be extended. Overlying the north wall of the structure are the foundations of a rectangular building. There are two areas of lazybeds in the vicinity of the structure. Clearance piles are present but are difficult to discern amongst bracken and mature heather. The sketch shows the layout of the site in relation to the terrain. CM003 is 500m from JK001 (see MHG24971) and may be associated with it. <2> <3>