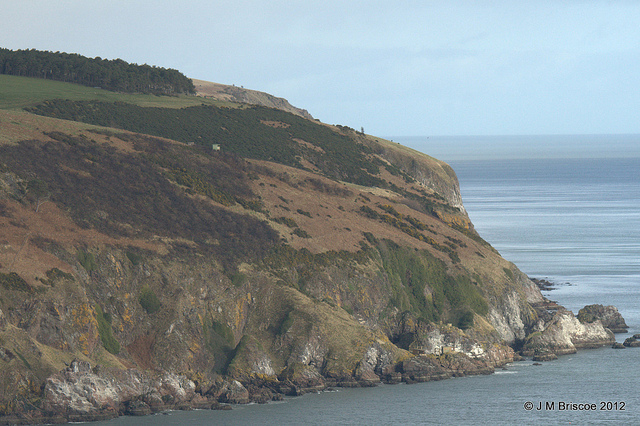 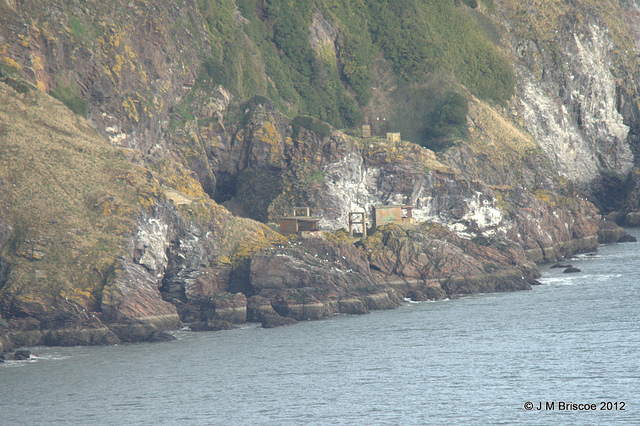 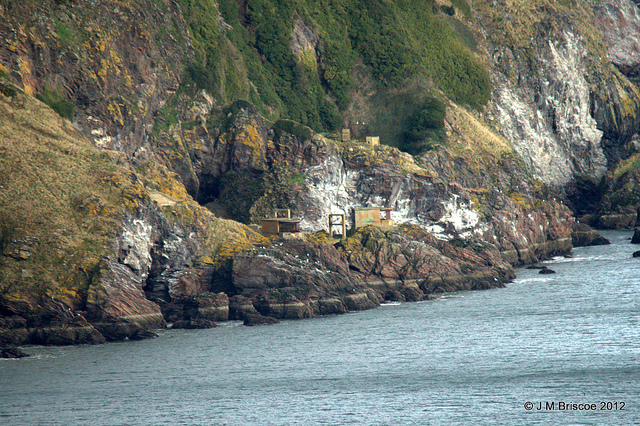 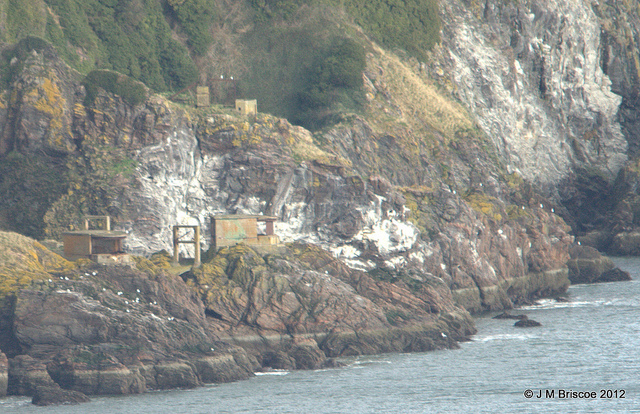 2 connected turrets and a third on an isolated stack. Slowly decaying. Doors and shields rusting and falling off. The connecting bridge is almost collapsed and dangerous.
CFA/MORA Coastal Assessment Survey 1998.

Two searchlight platforms at the foot of the cliff. Not visited.
Information from RCAHMS, October 2004

Located on rock stacks at the foot of the cliffs below First and Second World War battery (Site No. 1) are the remains of three searchlight emplacements. The searchlights was accessed via a wooden and stone flight of steps down a very steep slope. Two searchlights lie next to each other separated by a geo which required the building of a small suspension bridge to access the E searchlight. Both were part of the original 1913 plan but were rebuilt for the Second World War to a different design. A plinth possibly for a transformer or other electrical equipment lies to the rear of the W building. A metal wire framework similar in appearance to a rope ladder, which extends across the geo to the cliffs above, once carried the power and communication cables. The remains of a second one can be seen next to the NW corner of the bridge. A third searchlight dating to the First World War can be seen on a rock stack c.50m to the NE. Below the emplacement on the N side of the stack is a possible landing stage or a stone access path to the rock stack. The emplacement is similar to those on the South Sutor with a low concrete wall and a metal frame for a canvas or wooden roof and walls and a concrete closet to the rear. On the path to the searchlights, about half way down is a small building, possibly for electrical equipment.
Information from RCAHMS (AKK) 29 July 2013. <1> <2>

The structures described are visible on aerial photography taken in 2009. <3>

Martin Briscoe has submitted photographs of this site to the Highland HER Flickr group. <4>

The camps, batteries and associated buildings and features were scheduled by Historic Environment Scotland with effect from 26/03/2019. <5>